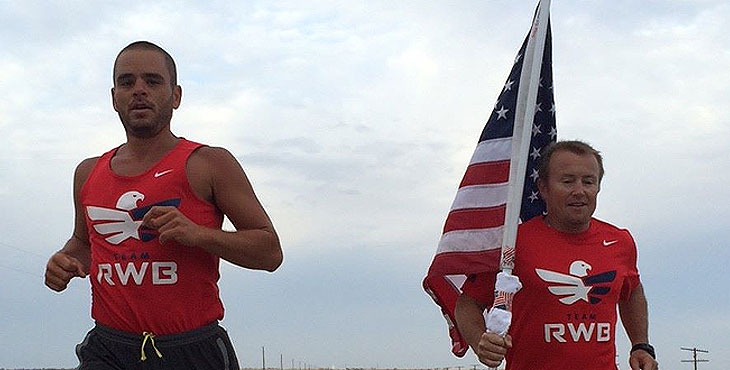 Founded in 2010, Team Red White & Blue has more than 50,000 members with chapters in 120 cities across the country. Surprisingly, Team RWB  accomplished this amazing growth without a physical facility, not even an administrative office, but that is changing.

“We have this building in Tampa, but we decided we wanted to give it back to the community,” he said. “The firebase is built on three major themes, knowledge, empowerment and inspiration. We invite Veterans, their families and members of the community in here every day.”

The national non-profit organization  enriches the lives of Veterans by connecting them to their community through physical and social activities. Team RWB’s activities include running, walking, cross fit, yoga, team relay races, social activities and volunteering.

Members often wear the group’s symbol, a stretched eagle on t-shirts, hats and even tattoos. Yes, there are several members who have Team RWB tattoos.

But that shouldn’t be surprising to any Team RWB member.

According to their recent impact study, “92 percent of Veterans who participate in our programs would recommend Team RWB to a friend,” Smith said. “Eighty-two percent felt they were more connected to the community. Seventy-six percent of civilians who participate in our programs say they better understand the challenges that Veterans face when coming home from service and 75 percent better understand the strengths that Veterans add to their community.”

The firebase adds an element of structure and reliability to the organization. Chapters across the country communicate via Facebook groups and meet routinely at parks, gyms and even national monuments. For example, the Washington D.C. chapter is spread out across two states and the District of Columbia. They have events every day of the week but there is no central rally point.

Veterans are no stranger to planting a flag and protecting it, so the firebase seems natural.

The facility is also benefiting patients at local VA hospital. Ryan Nitzsche, a recreational therapist at the James A. Haley Veterans’ Hospital in Tampa, Florida is tasked with coordinating programs for his Veterans.

“It’s made such a huge difference for our Veteran’s self-esteem, motivation level and sense of camaraderie. They are becoming more of a unit similar to what they were in the military, encouraging each other and providing motivation throughout other facets of life whether they are trying to get a job or struggling with other areas,” Nitzsche said.

Team Red White & Blue is growing at a rapid pace. The team brings in more than 700 new members each week and they hope that the firebase’s success will serve as a blueprint to plant the flag in other cities across the country.

“Eagle Ethos is everything I lost when I left the military. Team, camaraderie and community, that big hole that we have in our system when we leave the military, all that is right here,” Veteran Eric Garcia said.