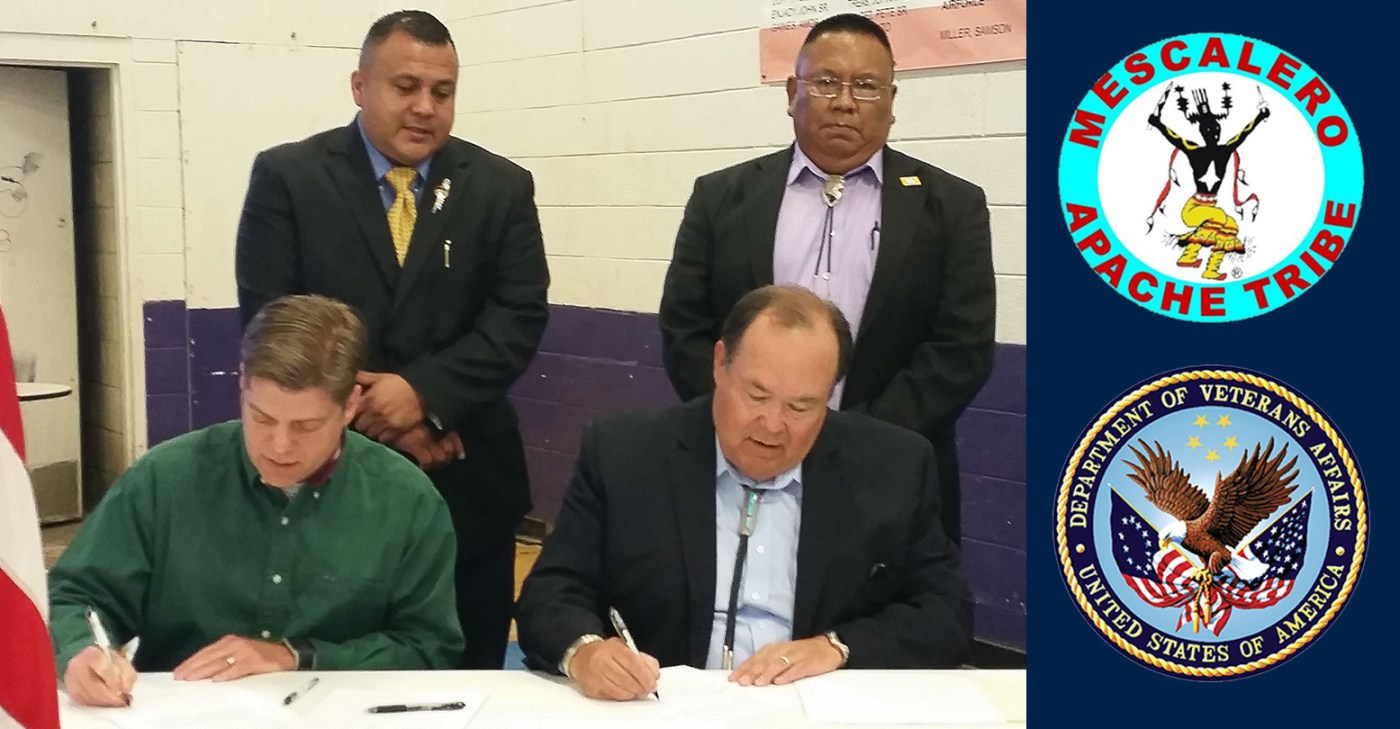 Home is a broad term evoking a variety of very personal and at times emotional responses. Our Veterans have defended our “home” through their service.   Missing home makes us “home sick.” The thought of “home” can make us reflect on a range of settings, whether it be our country, state, town or tribe. Home is also the dwelling where we “hang our hat” at the end of the day (as the saying goes), it’s where we eat, rest, laugh, cry, raise our families and create memories. Home as a dwelling is often purchased with a mortgage product. For some, that home, has been just out of reach.

Mescalero Apache tribal members have a rich and courageous legacy of service in the armed forces. Veterans from Mescalero live all across the United States, but many Mescalero Apache warriors return home to the 463,000 acre Mescalero Apache Reservation nestled in the mountains of south central New Mexico, approximately 40 miles from Holloman Air Force Base and 120 miles from Ft. Bliss in El Paso, Texas.

Veterans living away from their tribal home community of Mescalero who wish to achieve the dream of home ownership may be eligible for the conventional VA loan. However, what are the mortgage options available to Veterans who choose to return home to Mescalero, where the land is held in trust by the United States government, and individual Veterans don’t hold title to the land? The answer to this question has been years in the making.

“… there was a Resolution set in place 10-01 for the late Dr. Carleton Naiche-Palmer administration, passed 8-0 for the VA Home Loans to be here on the Mescalero Apache Reservation. With the thought and feeling that this would mean more homes for Veterans here in Mescalero. It was passed and sent off to the [VA].”

On April 14, 2015, tribal and VA officials came together to sign a Memorandum of Understanding (MOU) between the Department of Veterans Affairs and the Mescalero Apache Tribe, which opens doors for VA to make home loans directly to Veterans living on trust lands located in Mescalero. The Native American Direct Loan (NADL) Program provides direct home loans from VA to eligible Native American Veterans to finance the purchase, construction or improvement of homes on Federal Trust Land, or to refinance a prior NADL loan to reduce the interest rate.

The MOUs between the tribal government and the VA are a critical first step towards making VA NADL mortgages available to Veterans living in Indian Country. We are pleased with recent progress in establishing new NADL MOUs; most recently, MOUs between the VA and the Northern Ute Tribe (located in Utah) and the Prairie Band Potawatomi (located in Kansas) were signed last month, and plans are in the works to establish many more in the days ahead.

In addition to the ceremony, those on hand met with Veterans in the local community. Enrollment information about Veterans health care was provided and questions about a range of Veterans benefits were answered and addressed. Mescalero Apache Education and Veterans Director Kelton Starr took special care to ensure all Veterans (native and non-native) were encouraged and invited to participate in the outreach event. Nearly 9,000 Veterans live in Otero County, where the majority of the Mescalero Apache Tribe is located.

Veterans have earned access to a diverse set of benefits through their service and it is critical that awareness of these benefits as well as access to them is achieved through collaborative efforts. VA benefits and services reaching those Veterans brought in over $54 million to Otero County, which includes the tribal government as well as neighboring municipalities. Further, an ever-increasing number of tribal governments are establishing tribal Departments of Veterans Affairs , which is proving to be both a positive and proactive step forward for Veterans throughout Indian Country.

There are many, many ways we can honor our Veterans. Intergovernmental engagement between tribal, federal and state partners encourages communicating and collaborating on agreements, as well as providing training and outreach events which can lead to improved Veteran quality of life and ultimately, benefit the entire community.  These proactive and positive efforts are clearly paying off for Veterans living on the Mescalero Reservation and in neighboring communities.

Watch this video to learn more about the Native American Direct Loan Program.

Pictured in the feature image above: Michael J. Frueh, front left, Director of the Loan Guaranty Service for the Department of Veterans Affairs (VA), signs a Memorandum of Understanding between VA and the Mescalero Apache Tribe of the Mescalero Apache Reservation.  President Danny H. Breuninger, Jr., front right, signed on behalf of the Tribe.  The Memorandum allows VA to make loans directly to Veterans of this tribe living on tribal trust lands.  The ceremony took place at Mescalero, New Mexico on April 14. Mescalero Apache Tribe Vice-President, Robert Gabe Aguilar, back left, and Kelton Starr, back right, Education and Veterans Director, watch as the signing takes place.  Mr. Aguilar and Mr. Starr are both Veterans.

Stephanie Birdwell is the Director of VA’s Office of Tribal Government Relations.