Army Veteran goes “from the woods to the White House” 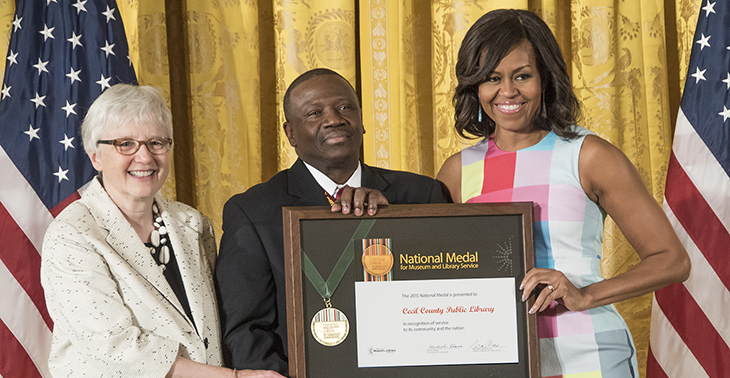 Army Veteran Thomas Cousar calls his story “From the woods to the White House.”

Less than five years ago, Cousar thought a computer was a typewriter with a screen. He had no idea what an email account was until he created his first one on January 4, 2012.

Drafted into the Army in 1971, Cousar was a cook in Germany until he got sick and was discharged after 18 months. He was diagnosed as bipolar eight years later, which led to a 30-year struggle with unemployment and homelessness.

“2011, I woke up and I was in my tent in the woods. I step out and the sun was rising,“ said Cousar. ”It was like I never seen the sun rise before and I feel so warm inside. I looked around and asked myself, ‘What have I accomplished in my life?’ I’ve not accomplished nothing, so I went to the VA…”

Cousar began his comeback at the Perry Point VA Medical Center in Maryland with the help of a psychologist and corrected medication therapy. He stopped smoking and went to classes daily in VA’s Wellness Recovery Action Plan.

His life took a dramatic turn when he began taking computer classes at the Perryville Library, a branch of the Cecil County Public Library in Elkton, Md.

In that job, Cousar serves as a peer specialist helping Veterans at the Perry Point VAMC transition to civilian life. As part of his job, he drives a VA van each week, taking six Veterans to the Perryville Library to take the same course he took, so they, too, can learn computer basics such as searching the web for jobs and sending resumes to potential employers.

Cousar said three of the Veterans he’s taken to the library have started their own business and one got work as a peer specialist at the Baltimore VA Medical Center.

“VA can’t do this by itself,” Cousar said. “We need all these outside programs to help because they are the connection to the communities.”

Cousar’s story and his work isn’t going unnoticed. On Monday, May 18, Cousar was honored at the White House as an example of community success with program directors from the Cecil County Public Library, which received the Institute for Museums and Library Services Award, the highest honor for the Nation’s libraries.

Denise Davis, director of the Cecil County Public Library, said Cousar was an easy choice for the one representative they could invite to share the award to show how the library serves its community.

“(Cousar) has been an inspiration to our staff and to many other Vets, because he came from a very difficult situation, where he was homeless,” said Davis after the White House ceremony. “He really was determined to work with VA and the library to try to pull his life together and we were delighted to find someone so committed to working with us to be successful.

The award highlights the work the Cecil County Public Library does to assist Veterans in its community. “Really, people in their 40s and 50s, it’s a new world in terms of applying for jobs. A lot of these Vets are coming out of a period of difficulty in their lives,” Davis said. “Our staff is very technically proficient and really successful on helping our citizens succeed, so it was a great combination with (Cousar’s) leadership and commitment, as well as our staff’s commitment to making a difference.”