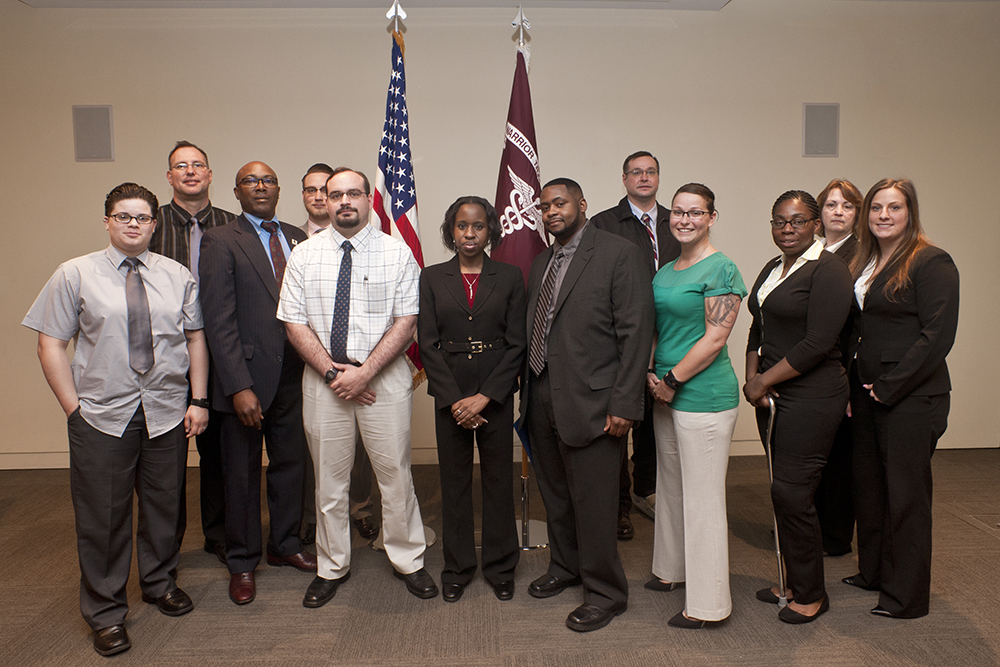 The answers, actually, are that “VA has done quite a lot,” and “We have, and we are [hiring Veterans].”

In fact, VA did it yesterday.

These are the people who process disability claims. Not ironically, many, if not all, of the graduates have personally gone through the claim process themselves while still attached to their unit’s Warrior Transition Battalion, a specialized unit where wounded Soldiers can focus on healing to transition back to the Army or into civilian status.

Jarrett Briscoe is one of them, and he’ll soon be working in the Appeals Management Center in Washington, DC.

“No one understands the plight of a Veteran as much as a fellow Veteran, so I can relate,” the former Army staff sergeant said. “I know the frustration. I’ve navigated the claims process. But now I’m in the position to be a change agent.”

Former Army Specialist Noah Prive, soon headed to the Boston regional office, tugged his goatee and smiled. “Obviously, I wasn’t planning on ending my military service,” he said, alluding to his separation, “but I’m proud that I’ll be able to continue serving Veterans.”

Briscoe, Prive, and their classmates will be joining a workforce that’s primarily made up of Veterans. What’s so special about WARTAC is the natural handoff, reintegrating soldiers whose careers ended prematurely into continuing their service, and being placed with a job upon graduation.

“This is like a promotion,” said James Rodriguez, Deputy Assistant Secretary of Defense—and 21-year USMC Veteran, to the graduates and unit leaders in the crowd. “You are the future leaders of a great organization, but right now, you’re taking the initiative to impact the lives of other Veterans.”

Mark Bilosz, Deputy Director for Operations of VBA Compensation Services, told the graduates: “Servicing Veterans is one of the most noble jobs in the federal government. With your 14 weeks of training, you will enter the VA workforce fully trained.”

Just like in the service, “training will always continue,” Bilosz noted. “VA has made huge strides, and we’ll not stop in continuing to impact Veterans’ lives.”

VSRs, along with Rating Veterans Service Representatives (RVSRs), do the bulk work in processing Veteran’s disability claims. Since disability entitlements open the door to additional VA benefits, the VSR is a challenging and rewarding position—and one that’s also a fantastic entry opportunity into VA and the federal government.

Eligibility for WARTAC is open to active duty Servicemembers in the transition process. It’s currently only offered at Fort Carson and Fort Belvoir, but the goal is to expand the program nationally. Additionally, applicants must be endorsed by their Chain of Command, and they must be available to attend the 14-week training program and to begin employment within 120 days from initiation of their training.

When the Servicemembers complete training, the graduates can get hired into one of VBA’s 56 regional offices (one in each state, including Puerto Rico and the Philippines, but some big states have multiple locations).

Prive, reflecting on the past 14 weeks, is excited to get started. “When you get your guys to your left and to your right, and if they need something, you’re there for them,” he said. “There’s never a question, like, ‘Well, I can’t help you.’ No, it’s, ‘I got you, man, whatever you need.’”