Lessons learned from our WWII heroes 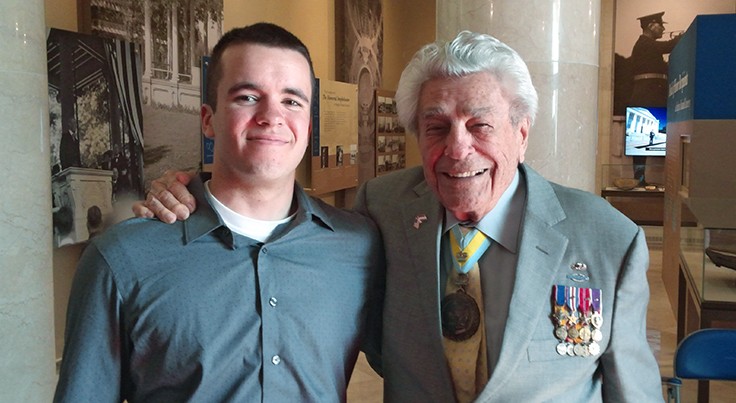 As one of my assignments with VA’s digital media team, I was asked to go to a wreath laying by the Dutch king and queen at Arlington National Cemetery.

King Willem-Alexander and Queen Maxima of the Netherlands were there to lay a wreath at the Tomb of the Unknown Soldier and to honor the soldiers and former “Rosie the Riveters” who fought and worked to liberate their kingdom from fascist oppression over 70 years ago.

When the ceremony ended, I found myself talking to some of the Veterans that the King and Queen had come to honor that day, and tried to learn something from them.

James “Maggie” Megellas is a man who has done more than I can sum up in a paragraph. His achievements as a soldier, paratrooper and leader are too great and varied for me to just list, but I think Maggie gave me the best summation when I asked him about the large medal he wore around his neck. He told me, “This is a national recognition for my contributions to the infantry. They’re each numbered, and you will never see another one.” As one of the most decorated officers in the 82nd Airborne Division, those contributions are there for anyone to see: a Distinguished Service Cross from the Battle for Nijmegen, two Silver Stars from the Battle of the Bulge, among others.

Photos from the ceremony

When I introduced myself to Maggie, I told him who I was and why I was there—a young West Point cadet, working with the VA, hoping to learn a bit about being an officer from him. In response, Maggie waved me closer, looked me in the eye and said, “The most important thing I can tell you, or anyone, is the difference between a leader and a commander. I was never a commander. A commander stands in the back and tells people where to go. A leader leads from the front. He goes where he’s needed and people follow him.”

That struck me. Before the academy, I’d been through Infantry Basic Training at Ft. Benning. I’d learned the Infantryman’s Creed and the rallying cry it’s built upon: “Follow me!”

I was taught to venerate the first man in, and accept that that man likely wouldn’t make it out. Now, three years later, I still know the creed by heart, and even say it every once in a while so it doesn’t slip from memory.

That day I met someone who is almost 100 years old explaining it to me again.

The difference between a leader and a commander is one that is spoken of almost daily in most officer training programs, but it’s different hearing it from a source like Maggie. For all intents and purposes, the modern idea of the infantry—one that moves fluidly with the battle instead of being stuck in rigid battle lines or trenches—was started by men with that same large medal hung around their neck, men who contributed not to a war, not to a nation, but to the most basic concept of leadership upon which both a military and a nation are built.

Matthew Kelley is an intern with the VA and Cadet at the United States Military Academy. Graduating high school after his sophomore year, he attended two years of college before enlisting, completing US Army Infantry OSUT in late 2012 and serving with the Georgia National Guard in the 2-121st for two years. He is a rising sophomore on USMA’s Small Unit Tactics Team, and will be attending the Army’s Air Assault School later this summer.