Home / Veterans Homelessness / All in on ending Veteran homelessness: We stand together

All in on ending Veteran homelessness: We stand together 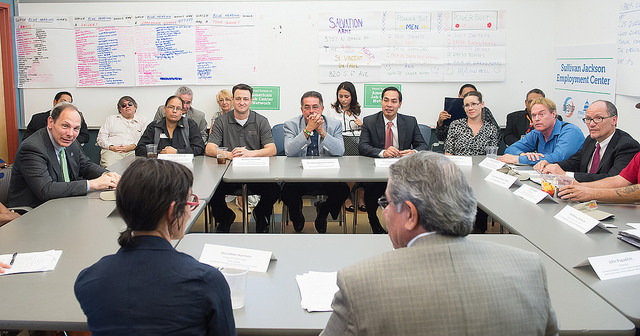 Five years ago, the Obama administration set an ambitious goal: to end homelessness among Veterans by the end of 2015. Many scoffed; many continue to scoff. In the face of such skepticism, we remain optimistic and focused, and know this is an historic opportunity we must seize. Veteran homelessness is not a reality we have to accept.

On Monday, the four of us took this message on the road in a three-city swing to connect with communities committed to ending Veteran homelessness. In Houston, we joined Mayor Annise Parker at a rally celebrating the creation of a system in her community which ensures that all Veterans who need assistance will be quickly linked to the supportive services and permanent housing. The progress made in places like Houston, New Orleans and Salt Lake City inspires us and provides models and strategies – like “Housing First” – for every community in the nation.

What we have been able to achieve in partnership with each other – joining forces with state and local governments, the business community and nonprofits – is nothing short of amazing. In fact, between the 2010 rollout of Opening Doors – the first-ever federal strategic plan to prevent and end homelessness – and the January 2014 point-in-time homeless count, homelessness among Veterans nationwide has been slashed by one-third. This progress is a testament to what our nation can do when we set the bar high, invest resources and effort, and refuse to scale back our vision. It’s unacceptable that men and women who wore the uniform are returning without a safe, stable place to call home.

Now, it’s important to understand this doesn’t mean that no Veteran will ever face a housing crisis in the future. But it does mean that communities like Houston, New Orleans and Salt Lake City are leading the way in building systems that will prevent and address homelessness whenever possible.

After leaving Houston we traveled to Tucson, where we continued to be inspired by the stories of selfless patriots who’ve used their grit and resilience to weather tough times and get back on their feet.

We met Veterans like Genevieve Yordani, a single mother who only a few months ago found herself homeless and with no job prospects. She was referred to the Sullivan Jackson Employment Center, one of 2,500 American Job Centers and one that uniquely serves homeless individuals, where she accessed short-term housing assistance, completed a skills training program and enrolled in Pima Community College. As Genevieve noted, the services she received weren’t handouts; they were a hand-up to help her turn her life around. They tapped into the tremendous skills and strengths that Genevieve brought to her service; qualities that she shares with every other Veteran.

By traveling together and listening to the struggles and aspirations of our Veterans, we sought to reinforce the spirit of collaboration and interagency partnership that has taken us this far. Veterans experiencing homelessness need seamless, integrated services – such as job training, health interventions, and housing – that none of us can provide on our own. So we’re in the business of “stovepipe implosion” – working together across departments to support our Veterans to the best of our abilities. We’re not just “all in”; we’re all on the same page, too.

Federal resources are essential – but this historic effort draws its strength from local leadership. The Mayors Challenge to End Veteran Homelessness, launched by First Lady Michelle Obama a year ago this week, has proven to be a game-changer. More than 600 local elected leaders have signed on to take action, which includes working with local Veterans Affairs offices to identify gaps in resources and driving the efforts to fill those gaps. We commend the five Southern Nevada mayors who took up that challenge with us in Las Vegas this week, and we’re confident that their efforts will be successful. We also spoke on our tour with representatives of service organizations, who bring passion and resolve to this work each and every day.

There were also people like Cliff Wade, a formerly homeless Veteran turned advocate. After getting out of the Army, Cliff found himself without a job, without a home of his own, and without much hope. He had been incarcerated as well. But at Tucson’s Sullivan Jackson Center, he found services that helped him go back to school and gave him a new purpose in life – helping other Veterans. Cliff now works to help Veterans find housing and connect them with the skills and training they need to find a job.

“My story is evidence that our efforts to end veteran homelessness can work,” Cliff says. “Today, I am a taxpayer who makes too much money to qualify for the services that got me off the street … who has a bachelor’s degree with honors in engineering. And every day, I’m lucky to have a job changing the lives of Veterans like me.”

We’re with Cliff; we all know how lucky we are to serve America’s Veterans. And we all know that ending Veteran homeless is not just an historic opportunity – it’s a national obligation.