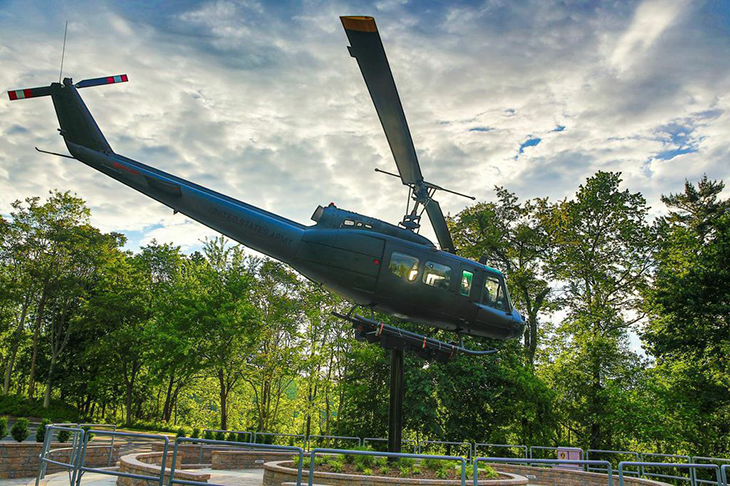 Carl Burns, a Vietnam Veteran who lives in Manalapan, won first place in the New Jersey Veterans Administration local phase of the National Veterans Creative Arts Competition. His essay, “Hangar Crew,” tells the story of a group of Veterans who came together to restore a Bell-UH-1D helicopter (“Huey”), left in a field in New Jersey for 20 years, forgotten by time. The essay has moved on to the national portion of the competition.

“I wrote this for the guys, it’s not for me,” said Carl. “That’s what makes it so special.”

Carl tells the unlikely story of the restoration of the helicopter, a “hunk of metal with broken windshields and missing parts.” The Huey eventually found a home, mounted and displayed at the New Jersey Vietnam Veterans’ Memorial in Holmdel.

For 14 months, a group of Veterans from Vietnam and Afghanistan, along with the occasional visit from grandsons, daughters and others, met each Monday, painstakingly and lovingly restoring the once forgotten piece of machinery that was such an important part of Carl’s life story.

“Once we got the helicopter, we never got a ‘no’ from anyone,” said Carl. “Needed parts magically showed up. No contractor or supplier said no to our requests.”

“Vietnam was full of the good, the bad and the ugly,” said Carl. “This is nothing but the good.”

Carl is no stranger to writing. “Centaurs in Vietnam: Untold Stories of the First Year,” was published in 2008 and is full of tales from Carl’s first year in Vietnam as an air cavalry helicopter pilot and the troop based at Cu Chi.

The Huey became the symbol of U.S. combat forces in Vietnam. In country, more than 12,000 helicopters served alongside our troops. The 7,000 Hueys that served flew 9,713,762 hours. At home, millions watched them fly on nightly news reports. The Huey is an iconic image of the Vietnam Era and a fitting display at the Vietnam Era Museum & Educational Center.

The restored Huey was dedicated on May 7, 2014, the helicopter’s 50th birthday. It is a fitting tribute to all who have served our country, as well as a unique and historically important teaching tool for the thousands of students and visitors who experience the Memorial and Museum each year.

Interested in seeing the newly-restored Huey? Visit at the New Jersey Vietnam Veterans’ Memorial and Museum on the grounds of the PNC Bank Arts Center in Holmdel, New Jersey. Free, guided tours of the memorial are offered the first Saturday of each month at 11 a.m. and 1 p.m. Tours are also available by request. Visit http://www.njvvmf.org/ for more information.

Stephanie Eichmeyer is a former journalist turned writer and public relations specialist. Her background includes non-profit work in health care and fundraising, as well as event planning, media and community relations and internal and external communications.