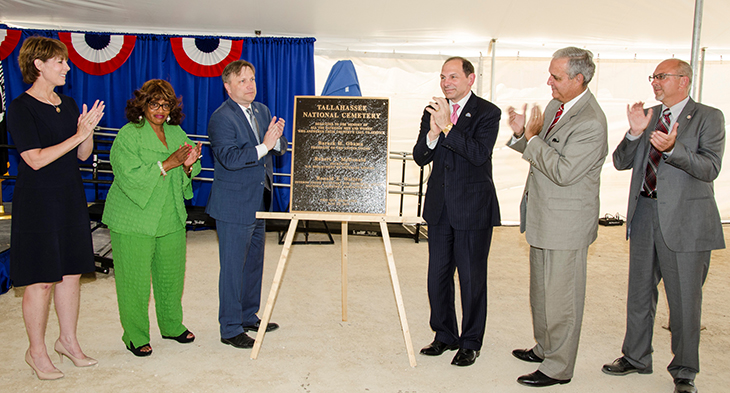 “Here, we establish another glade of America’s most hallowed ground,” said McDonald, “to pay homage to men and women who so valued America that they placed their lives at risk in the defense of generations yet to come.”

When Tallahassee National Cemetery opens for first burials in a few short weeks, it will be part of the largest expansion of national cemeteries since the Civil War. In the next few years, VA will open 17 new cemeteries throughout the country. Later in 2015, VA will dedicate Cape Canaveral National Cemetery, also in Florida. This entire expansion effort will increase or enhance burial access for over two million Veterans and their families. Once these planned projects are complete, more than 96 percent of Veterans will have access to a burial option within a 75-mile radius of their homes.

VA will also open five columbarium-only cemeteries as part of its Urban Initiative. VA’s goal is to help city-dwelling Veterans and family members overcome time and distance challenges associated with burial and visitation in urban areas. These facilities will be in New York; Los Angeles; Alameda, Ca.; Chicago and Indianapolis.

VA will build these new cemeteries at the same time that it continues to expand the service capacity of existing cemeteries. VA will also continue to work with its state and tribal partners to fund the establishment, expansion and improvement of state and tribal Veteran’s cemeteries.

VA and the National Cemetery Administration are fulfilling Lincoln’s promise to “… care for those who have borne the battle …,” by expanding Veterans’ access to final resting places worthy of their service and sacrifice. Tallahassee National Cemetery, America’s newest hallowed ground, is just one of many shrines to come that will help to keep that promise to those to whom we owe a great debt of gratitude.

Chris Erbe is a public affairs specialist with the National Cemetery Administration. He is a 26-year Veteran of the U.S. Navy where he served as a musician and public affairs officer.