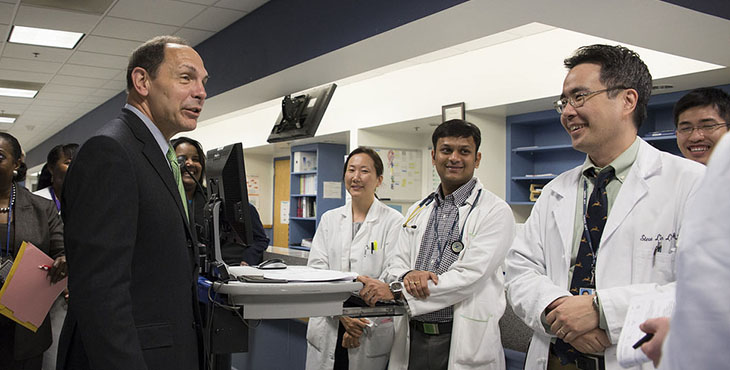 VA Secretary Bob McDonald spent much of this summer — VA’s Summer of Service — sharing his vision for VA’s future with fellow employees and Veterans in cities across the country.

He spoke at a number of Veteran service organization national conventions and held town meetings at a number of VA facilities, recruiting new doctors and nurses and promoting MyVA – his plan for transforming VA.

The Secretary took his message to conventions of the Veterans of Foreign Wars in Pittsburgh, the Vietnam Veterans of America in Springfield, Ill., the Military Order of the Purple Heart in Las Vegas, and the Disabled American Veterans in Denver, where he also participated in a DAV forum with House Veterans Affairs Committee Chairman Jeff Miller.

VA Secretary Bob McDonald shared the podium with his father, Ray, at a town meeting at Hoosier Village in Indianapolis. Ray McDonald and his wife, Fro, reside in the retirement community.

He held town meetings with employees and residents in some of those cities and also in Anchorage, Alaska, and Indianapolis, where he held a press conference at the Indianapolis VA Medical Center to talk about the VA budget and a town hall meeting with employees. He also conducted a briefing on VA operations and his work to transform VA while at the Hoosier Village, a retirement community in which his parents reside.

“We’re in the process of transforming VA,” McDonald said. “VA during the time of crisis became very bureaucratic, very inward looking … almost like a Kremlin … and what we want to do is … improve the VA to be the best customer service agency in government.”