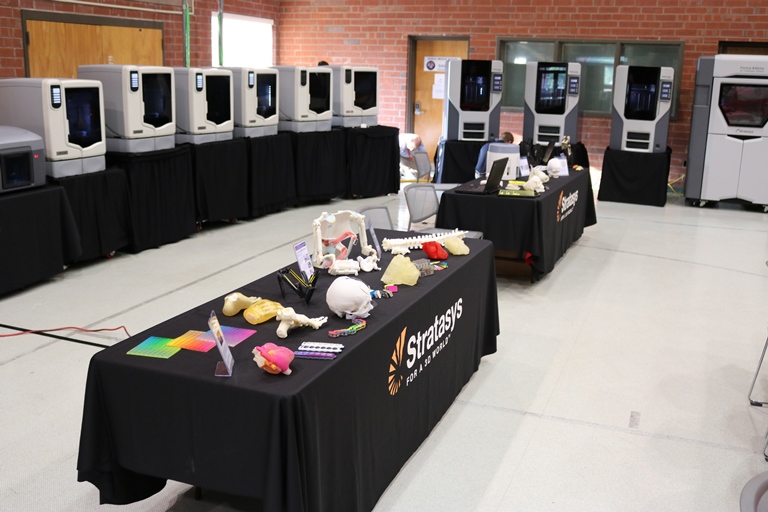 Recently, the McGuire VA Medical Center in Richmond, Virginia, the Assistive Technology Program partnered with the VA Center for Innovation to bring together innovators, clinicians, Veterans, and problem solvers to create solutions for challenges “differently-abled” Veterans face every day. I could not have imagined the impact the VA Innovation Challenge Make-a-thon would have on all of those involved.

There were about a dozen challenges pitched by both Veterans and participants for solving over the course of the make-a-thon. Twenty-one teams formed to create solutions aimed at improving not only the quality of life for the Veterans involved, but also – since the solutions would be open-source – patients facing these challenges across the United States. What a powerful mission. The energy in the room as the teams formed and ideas developed was so intense it’s difficult to describe other than to say it was like the Energizer Bunny times 1,000.

As the day went on, the energy continued. Teams ranging in age and expertise were problem solving, mentors were guiding, and Veterans were providing feedback. Some team members were only ten years old while others had thirty years of professional experience in engineering. On that note, the expertise in the room was AMAZING. Mentors came from Toyota, GE, 3D Systems, Stratasys, the Assistive Technology Program and McGuire VA Medical Center’s occupational therapy and prosthetics staff. Software engineers, physicians and CAD design experts all shared their knowledge. The diversity on the teams and the collaboration was incredible as they worked towards one goal: accelerating the development of personalized assistive technologies and prosthetics.

As teams continued to develop their concepts, the designs were sent to one of the fourteen 3D Printers from Stratays and 3D Systems for the prototypes to print overnight – you could hear the humming of the machines as they worked hard to create the different teams’ visions turning them into possible solutions.

Day 2 brought just as much energy, if not more, as the teams had only a few hours to finalize their creations. It was a rush to the very last minute, with team members running around trying to find tools, consult with their mentors, and create their final presentations.

Finally, it was time for the teams to present their solutions in three minutes…talk about time crunch. I was not presenting but I could feel the pressure! To say everything they wanted and showcase their design in such a short amount of time made even me anxious. After listening to twenty-one presentations over almost two hours, the judges had the huge undertaking of deciding the ultimate winning design.

As part of the judging criteria, all of the teams had to upload their designs to the NIH 3D Print Exchange. There the designs will be kept publicly as open source material, meaning that anyone, Veteran or non-Veteran, has access to their designs to tailor and adapt with resources in their own communities. How cool is that! The technologies developed at the make-a-thon have the potential to not only change Veterans’ lives involved with the event, but also help change the lives of differently-abled people anywhere due to the open source nature of the technologies developed at the event.

And the winner was … drum roll please … Team Spline! They designed a coupler for Lisa Marie Wiley, a Veteran who lost her leg below the knee in a bomb blast in Afghanistan. For winning, they won $20,000 from Google.org to help support further development of their prototype. Six other teams won prize money as well to help fuel their efforts. All I heard as people left were positive things, like the following:

“Thank you for this opportunity,” said a participant

“I can’t believe I helped a Veteran,” said a 3D printer vendor

“For me, I don’t think there is a better thank you that you could give me,” said a Veteran.

“What an amazing event. Are you doing it again next year?” a mentor said.

“I think we can do a Make-A-Thon at our school,” a participant said.

The Make-a-thon had an impact on everyone’s lives. There is nothing more I can say, but thank you to everyone involved.

Melissa Oliver is an occupational therapist and the Assistive Technology Program coordinator at McGuire VA Medical Center in Richmond, Virginia. She works assisting active duty Servicemembers and Veterans with various diagnosis transition back into their life roles through the use of assistive technology. She specializes in areas of electronic cognitive devices, adaptive computer access, learning technologies and electronic aides to daily living. She is currently a board member of the Virginia Assistive Technology Advisory Council for the Commonwealth of Virginia.  Oliver also serves as the managing editor of NeuroRehabilitation, an Interdisciplinary Journal.