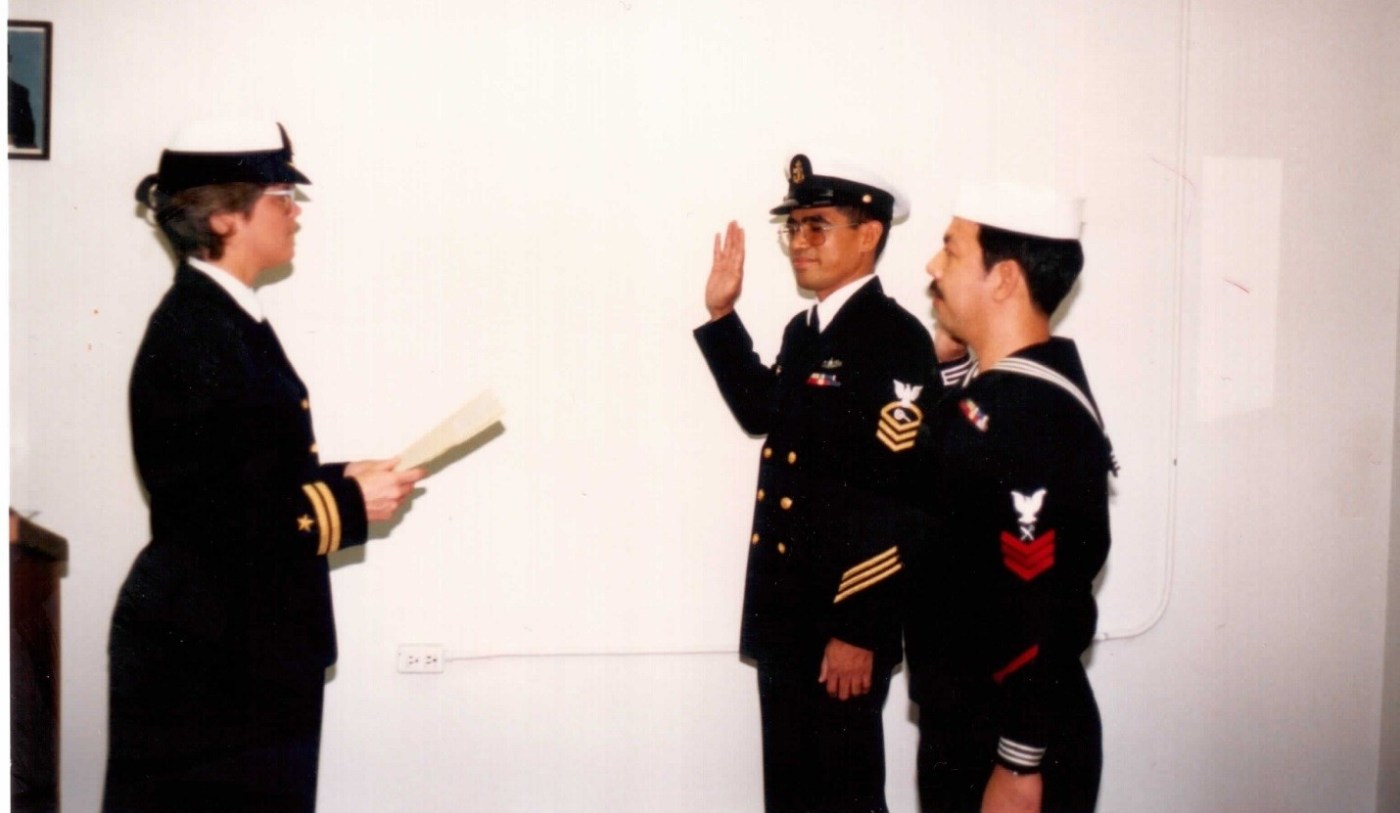 This article was originally posted on The Beacon, the official blog of the U.S. Citizenship and Immigration Services (USCIS).

The following is an interview with Ely Borjal, a Veteran and employee at USCIS. Borjal spent 21 years in the United States Navy and attained the rank of chief warrant officer. He was recruited at Subic Naval Base, Republic of the Philippines, on June 19, 1974, and served as a machinery repairman.

On his last tour, Borjal was an officer in charge of a forward submarine repair site. He completed his bachelor’s and master’s degrees with Roosevelt University and Florida Institute of Technology while on shore duty at the Naval Training Center Orlando, Florida, in 1986 and 1988, respectively.

On May 21, 1996, Borjal joined the legacy Immigration and Naturalization Service as an immigration inspector. Over the past 19 years, he has served in numerous capacities, and is currently an adjudications officer in the Citizenship Branch of Field Operations Directorate at USCIS headquarters in Washington, D.C.

Mr. Borjal, thank you for your service to our country. What motivated you to serve?

I grew up in the Philippines in a part of Manilla that was the pits – the poor of the poorest. My father was a laborer, and I was the oldest of six children with five sisters. The main reason for joining the United States Navy was economics. That is the basic truth. Out of 2,000 who applied, I was one of 34 who passed the entrance test. Being surrounded by poverty, my father kept me out of trouble by asking me to read English-language books when I wasn’t doing chores, and that was how I was able to do so well. After I graduated from high school, a friend who had already joined got me interested.

Tell me about your career in the Navy. How did it start out?

I remember we travelled from the Philippines to the training in United States on a boat with nothing more than a rain coat. Coming from the Philippines, it was freezing! Our first night in the barracks, we were forced to evacuate during the middle of the night because someone was smoking in bed.

During training, I excelled and moved up quickly. I went to a technical school and became a machinery expert. I was already a petty officer after just six months. My first duty station was in Spain on submarine tenders – ships that maintain subs.

So when did you decide to become a U.S. citizen?

Remember now, when I joined I was a Filipino citizen. I qualified as a radiological control worker on nuclear reactors in subs. I did hard, dangerous work, and I was successful – but I wanted more. To move up and be able to do all of the jobs available and become an officer, I needed to be a U.S. citizen. I took courses and went back to school. I did research on my own and found out what I had to do to apply. I became a citizen in 1982 in Honolulu, Hawaii.

How did it feel when you finally took the Oath of Allegiance and became an American?

I was in a ceremony in a stadium with 5,000 people. It was mostly civilians. They put me at the head of the line because I was in my uniform. I was the very first person to receive my certificate. There were local dignitaries who shook my hand. I was thinking: “Holy cow, am I dreaming?” I remembered back to my childhood in the Philippines when I was pushing carts, picking up bottles and cardboard to make a few pesos, and rummaging through trash, sometimes even for food. There were times we would eat porridge the whole month long we were so darn poor.

Today, I share those experiences with others becoming citizens, I tell them look at my experiences and how far I have come. I’m not embarrassed to admit that. That is why I love this country.

What do you tell new citizens and people who are considering becoming citizens?

I share my journey. I tell people who are thinking about becoming citizens that they have to ask themselves if it is right for them. Your heart has to be in it. Don’t do it for selfish motivations. We are here to contribute to this great country. You have to make an effort to be successful and obey the law.

When I attend naturalization ceremonies, I provide a word of encouragement. It means a lot, I see people crying. I try to impart to new citizens that it is not just a piece of paper. It is not just like a driver’s license or some other document. Being an American is in your heart, you embrace the flag. Now you wave that flag (the American flag) instead of the flag where you came from.

This article was submitted by the USCIS blog team and originally posted on The Beacon, the official blog of the U.S. Citizenship and Immigration Services.