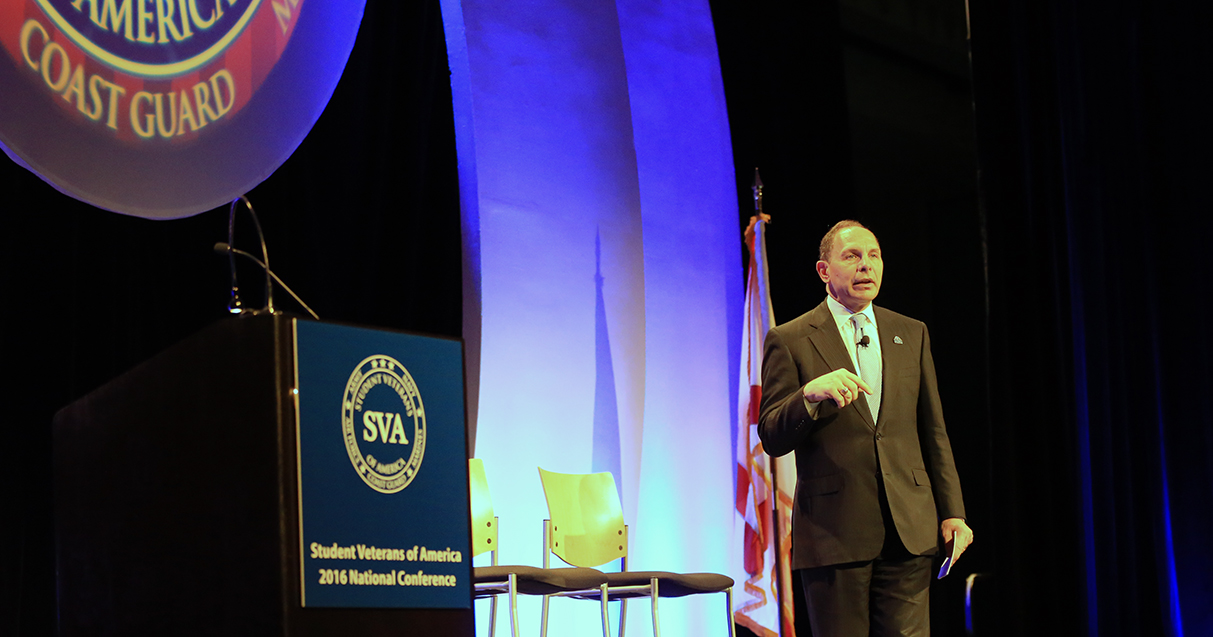 Anyone attending the Student Veterans of America (SVA) conference would not guess that SVA is one of the youngest Veteran service organizations. More than 1600 student Veterans and supporters attended the conference in Orlando, Florida coming from the more than 1,300 SVA chapters across the country.

Majority of these Student Veterans have transitioned from the military within the past few years and through SVA, form a Veteran family with other Veterans at their place of higher education. SVA connects these chapters to provide support and resources on the national level.

“It’s a focus on the entire life cycle of student Veterans,” said Jared Lyon, the newly appointed President and CEO of SVA. “We help Veterans make better informed decisions as they transition out of the military and look to use the education benefits they have earned. We also ensure Veterans are supported while on campus and then transition that Veteran on to a successful career.”

The connections and network opportunities SVA and the conference provides help Veterans find employment opportunities, which even at a time when Veteran unemployment is at near record low levels, can be a challenge. Companies seeking to hire Veterans have expressed that finding Veterans to hire can be difficult.

The interest is finding additional Veteran employees was evident at the conference. Many companies such as Raytheon, Google, General Dynamics, Citi and Accenture all had a presence at the conference hoping to recruit Veterans.

Secretary McDonald provided an update on the agency priority goals during his address to the conference and offered a summary of VA transformations, many times citing private sector business practices as the model for implementation.

But to the room of student Veterans, he had a special message.

“Prepare yourself to lead, and lead to change,” he advised.

Secretary McDonald shared his own personal experience with higher education. While in the U.S. Army he pursued a MBA not because he wanted to, but because it was the only degree offered on the weekends at his base. In fact, they would fly his professors in on a C-130 every weekend for the troops.

His advice was to prepare for the unexpected and to take advantage of every opportunity, because at the time he had no idea that his MBA would lead him to a career with and running one of the largest companies in the world. He had no idea this journey would place him as the Secretary of Veterans Affairs.

He received a standing ovation from the crowd still stunned after he gave out his e-mail address and phone number if the Veterans needed any help.

“Not many cabinet level secretaries do that,” remarked Jared Lyon to the conference.

“It’s continuing on with the success of the public private partnership, moving in to phase two of the million records project to see the results of persistence rates for Veterans in higher education,” Jared Lyon said. “We keep getting bigger, better and stronger.”