Home / Honoring Vets, Veteran of the Day / WWII Veteran runs for the fallen

WWII Veteran runs for the fallen 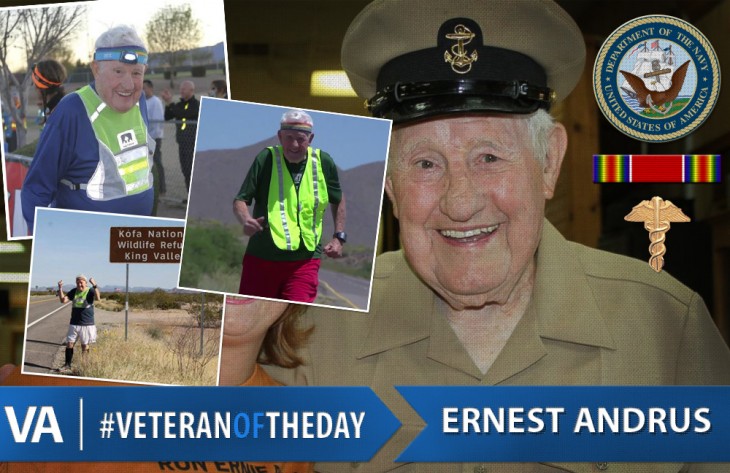 Veterans and staff members at the Biloxi VA Medical Center hosted a special visitor earlier this year.  Ernest Andrus stopped by the hospital at the end of January, one of his days off, to attend a reception in his honor.  These days it’s not so easy to get on Andrus’ calendar as the 92-year-old WWII Veteran runs across the country four days a week to raise awareness of the sacrifices the men and women of the military made during World War II and the many conflicts since that time.

“Freedom isn’t free,” Andrus said.  “We can’t forget our comrades that were injured or killed serving and protecting our country.  That’s what I hope I can achieve with this run.  Plus I always wanted to do this.”

Once Andrus made up his mind to run across the country, he spent several months planning the trip.  In October 2013 he touched the Pacific Ocean near San Diego, turned east and began jogging.  He’s been running ever since, and in January, as he ran along the Mississippi Gulf Coast, VA staff jumped at the chance to invite him over.

“As you can see from this large turnout,”  said Anthony Dawson, the director of the Gulf Coast Veterans Health Care System, “we are all in awe of what you are doing and honored to have you here today for a visit. If we switched the numbers of your age making you 29 it would still be an amazing accomplishment.  But at 92, wow!”

Here’s how Andrus came to running across the country at age 92.

Ernest Andrus was a corpsman in the Navy, joining at the start of the war.  He left the Navy when the war ended in 1945, and enrolled in college on the VA GI Bill, found a job and went on with his life.  He didn’t spend a lot of time dwelling on his experiences during the war, as some did. He said it was too hard to do.

“I wasn’t right in the middle of the action,” Andrus said, “but I saw enough. I found it easier to just not spend a lot of time thinking about those that didn’t come back. Not like some of my crewmates did. Not for a long time.”

As a corpsman aboard a LST (Landing Ship, Tank), Andrus said he stayed busy tending to the wounds and illnesses associated with war.  He assisted in surgeries, and to this day recalls an amputation that was performed aboard his ship.  As the surgeon began the procedure, the patient needed blood.  Andrus was the same blood type so he rolled up his sleeve, while he was holding the IV bag (they didn’t have a pole), and gave blood.  He had to do this several times throughout the night.  He remembers feeling light headed and weak.

“We all did what we had to do,” Andrus said.  “I didn’t do anything that any other man in our crew wouldn’t have done.”

Andrus’ life ticked along at a normal pace for the next 60 years or so.  One day he received a phone call from some of his former crew members, to include the skipper, and nothing was ever the same after that.

“We were at a point in our lives when our families were grown, our careers were over and now we had time to think.  So we began reminiscing about our time in the service.  And one thing we all agreed on was we wanted the younger generations to understand the sacrifices so many made which made America the country it is today,” he said.

“We wanted the younger generations to understand the sacrifices so many made which made America the country it is today,” Andrus said.

So the group of about 30 got together and decided they could preserve the memories of life aboard a Navy LST by finding and refurbishing a decommissioned ship and turning it into a floating memorial.  They located the USS LST-325 in Greece, got it back to America and it now is available for tour in Indiana.  The refurbishment took years of red tape, fundraising and countless hours of coordination, but the group persevered.  The effort serves as a testimony to Andrus’ sheer grit and determination as he treks across the country to share the message that America should acknowledge and appreciate all that Veterans have done to preserve freedom.

“We have a great country,” Andrus said.  “We can’t forget how we got here.”

If all goes as planned, Andrus will arrive on the east coast of Georgia, near Brunswick, on Aug. 20, 2016, one day after his 93rd birthday.

About the author: Mary Kay Gominger is chief of community and public affairs at the Biloxi, Mississippi VA Medical Center and contributed this story after her experience meeting Mr. Andrus.