Vietnam Veteran gives back by volunteering to serve others 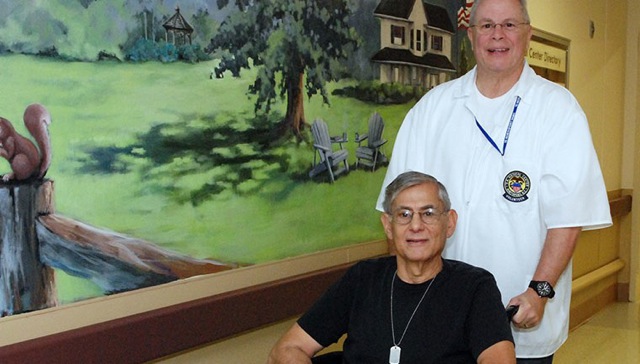 There was a diverse group of patients scattered throughout the pavilion; some in wheelchairs, others milling about, and the rest settled into rows of prototypical reception chairs that lined the vestibule of the VA Medical Center in Northport, New York. Most had all their God-given limbs, others were not that fortunate. I took a deep breath.

The weathered baseball caps that dotted the room left no doubt as to who these people were; WWII Veteran, United States Marine Corps, Korean Veteran, U.S. Army, Vietnam Veteran, U.S. Air Force, Desert Storm. Whatever the embroidery, these souls were all members of a select group of Americans. They were Veterans. The younger assisted the less lucid negotiate the kiosk check in, and stronger helped the weaker rise from their chairs. Selfless members of the same team who felt each others’ pain and helped each other cope. Whatever their station in life outside this complex, in here, they all shared a common, unbreakable bond that each would cherish to the end.

It was my first day at VA as a volunteer escort. As I entered the escort office, it was apparent that, at 67, I was one of the youngest in the room. Like me, most of my fellow volunteers were Veterans who felt the same calling as I did. Our job was to shuttle patients between clinics within the massive complex either by wheelchair or stretcher. As the phone rang, our crew chief logged in each move request, and issued us green slips of paper with the Veteran’s name, from and to locations and whether a wheelchair or stretcher was needed.

Over the next several weeks, I shadowed my dedicated co-workers to learn the ropes and paid my dues. We all strove to make the patients’ lives a bit more bearable. After all, none were there by choice. We became their companions, if only for a few moments between clinics, and always showed them the respect they deserved. We chatted as we navigated the maze of tunnels that joined the campus buildings. Our brief friendships ended at the radiology suite, or urology, dialysis, mental health, lab, prosthetics or any number of other clinics they needed to visit.

I’ve had the privilege of assisting Veterans from World War II through Iraq and Afghanistan. Most memorable were those from our greatest generation, now in their 90s, frail yet proud, who spoke of bygone days while we waited for an elevator or made our way through the tunnels. They recounted times when they were young and strong and served in faraway places with strange sounding names. Though their words came up through their throats, their eyes told the real stories. Some still sparkled in spite of the pain, others were empty, purged of images too horrific to harbor through the years. Some of these Veterans were clearly on the mend but others were still in those places far from their now constant pain and confusion. One proud yet feeble WWII Veteran refused to accept a ride in my wheelchair, instead wanting to travel with the aid of his own walker but he let me tag along “just in case”.

Veterans, especially those with the scars of war, should serve as role models to the rest of us. They possess character traits that were once the norm throughout our land but sadly, may no longer be. They still believe that a handshake trumps a contract, that sacrifice builds character, courtesy and respect have a place in society and that working toward the greater good is more important than gaining individual benefit at the expense of your fellow man. Perhaps most importantly, they expect nothing they have not earned.

As escorts, we are often thanked by our Veterans for the assistance we provide to them. Ironically, it is we that owe each of them a debt of gratitude for their service to this great nation of ours. We can all learn from the good men and women within the walls of the Northport Veterans hospital, and VA hospitals like it throughout the country. May God bless them all.

About the author: Charles Tritto is a 68 year-old, United States Air Force Veteran, who proudly served during the Vietnam War. After separating honorably from the Air Force, Charlie worked in the telecommunications/network operations industry. Upon retiring, he began serving fellow Veterans as a volunteer escort at Northport VA Medical Center in March 2015.