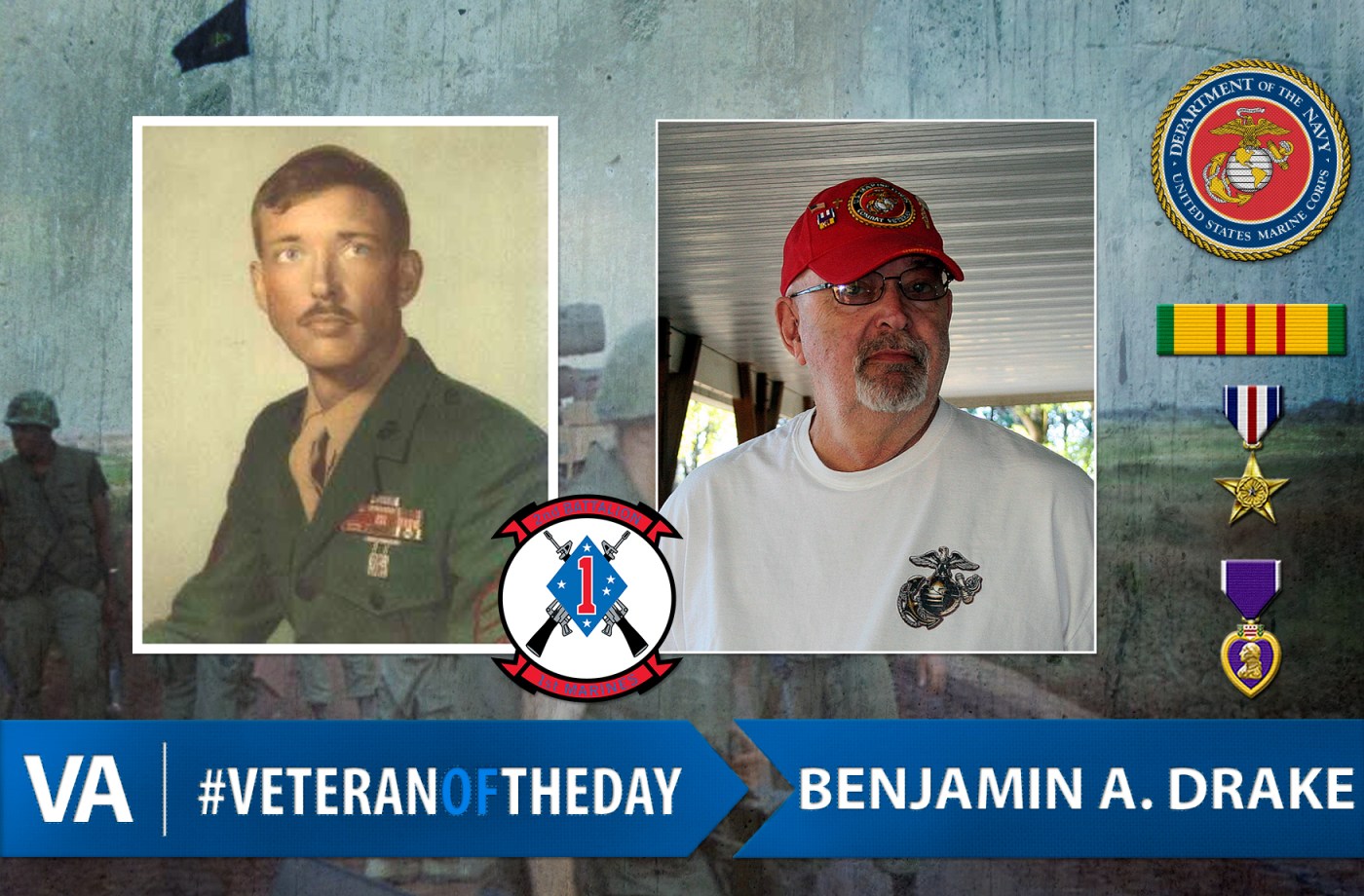 Today’s #VeteranOfTheDay is Benjamin A. Drake. After a run in with authorities, a police officer suggested that Ben join the Marine Corps. Two days later he was in boot camp. Ben was in the Marine Corps from 1967 – 1977 and served in the infantry in Vietnam.

He was sent to Vietnam with Hotel Company, 2nd Battalion, First Marines, and served in Quang Nam Province. During his time there he lead a four-man rescue team to support a squad of Marines that had been ambushed. For his actions that day he was awarded a Purple Heart and a Silver Star.

“Corporal Drake voluntarily led a fire team-sized reactionary force from his platoon patrol base with the mission of reinforcing and supporting another squad from his platoon which had been ambushed by an unknown size North Vietnamese regular army unit. The squad leader of the beleaguered squad had been killed by enemy fire and the squad had suffered extensive wounded during the late night of March 3/early morning hours of March 4, 1969. When the under strength platoon received a radio report of the incident from the beleaguered squad, the platoon commander, with only one squad available at his patrol base, called for volunteers to go to the aid of the ambushed squad.

Corporal Drake, the most experienced NCO with the platoon and the platoon radio operator, immediately volunteered to lead the mission to help his fellow Marines. Even though there was no radio available to support his small unit and knowing the terrain and normal modus operandi of the North Vietnamese forces for trying to use a small unit as bait to draw out a reactionary force and then ambushing that reactionary force, Corporal Drake led his small unit to the area of the squad’s position. En route, his small unit came under intense enemy small arms and hand grenade fire. Leading by example and repeatedly exposing himself to enemy fire even though painfully wounded himself by hand grenade fragments, he fought his way through the enemy force to the beleaguered, which was huddled around the body of their fallen squad leader. He then organized them into defensive positions, used their radio to coordinate suppressive supporting fires and thereby enabled his small unit to repel the superior enemy force.

Later that night, Corporal Drake was able to bring in a medical evacuation helicopter to remove the wounded. Refusing evacuation, even though painfully wounded himself, he continued the squad’s mission and returned to his platoon patrol base at first light the next day. Among the numerous enemy bodies recovered the next day was the body of a North Vietnamese regular army senior officer. Through his extraordinary initiative, leadership, and inspiring valor in the face of superior enemy forces, Corporal Drake was personally responsible for undoubtedly saving the lives of the other members of the ambushed squad. Corporal Drake’s extraordinary heroism, repeated acts of valor, and loyal devotion to duty reflected great credit upon himself and were keeping with the highest traditions of the Marine Corps and the United States Naval Service.”

Upon his return to the states, Ben was transferred to Cherry Point, North Carolina, and was assigned as a guard to the general’s building. Later he was assigned as the company clerk to the first sergeant. He was then transferred to the visitors center on Parris Island and in 1973 he was transferred to Okinawa where he volunteered for the 3rd Reconnaissance Battalion. He was trained as a drug and alcohol counselor and later went through career counselor school on Camp Butler where he graduated first out of 22 Marines. Also while he was in 3rd Recon he and seven others were chosen to go to the Philippines to train Philippine Marines in map reading, demolitions, his specialty, combat maneuvers.

He transferred to Camp Lejeune where he was assigned to Headquarters Company, 2nd Batallion, 8th Marines, as the battalion career counselor. He went on a Marine Corps Med Cruise with the battalion as a career counselor. Then he was transferred to the deputy camp affairs office and was in charge of the maintenance of the base of Camp Geiger for his remaining time in the Corps. During this time he received an award for being the career counselor of the quarter. Also on the cruise, he received a Meritorious Mast for lifesaving when he jumped in after a sailor who was hit by a car at midnight in Monte Carlo and was thrown off the pier and into the black water.

During his last duty, he started to experience problems with his combat wounds and retired on June 6, 1977.

Ben is the fourth of 14 Marines in four generations in his family. He is a retired teacher and dean of students and holds a doctorate in divinity.

Thank you for your service, Ben!