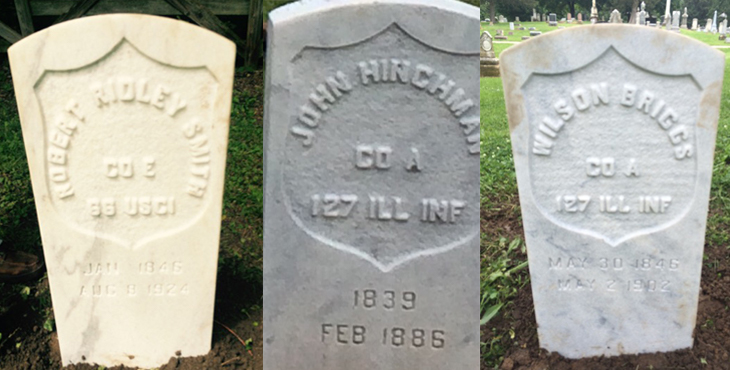 The forgotten graves of 22 Civil War Veterans received military headstones at a cemetery in Oswego, Illinois. The new markers were dedicated on Saturday, May 4, with descendants of the deceased in attendance to honor their family’s heroes.

Robert Ridley Smith is one of several African-American Civil War Veterans buried in the cemetery who received an official marker for the first time. Smith’s great-great-great-granddaughter was there to lay a flower at his grave.

Robert Rogers and David Bailey led the efforts of P.H. Sheridan Camp 2 of the Sons of Union Veterans of the Civil War to ensure these graves were properly recognized. “Our camp has been very active in cemetery operations,” Rogers said. “We found this cemetery after another historian advised us some Civil War Veterans were buried there.”

The two camp members met with historian Stephanie Todd at the cemetery in October 2014 to begin identifying which soldiers needed markers and which needed maintenance.

Rogers and his group worked with VA’s National Cemetery Administration for the procurement of the markers.

Camp 2, PH Sheridan has obtained more than 200 markers from the VA in the past 10 years.

A list of updated headstones in Oswego is below. We honor their service.

To find these and other Veterans gravesites via VA’s National Gravesite Locator. You can search for burial locations of Veterans and their family members in VA national cemeteries, state Veterans cemeteries, various other military and Department of Interior cemeteries, and for Veterans buried in private cemeteries when the grave is marked with a government grave marker.he locator includes burial records from many sources. These sources provide varied data; some searches may contain less information than others. Information on Veterans buried in private cemeteries was collected for the purpose of furnishing government grave markers, and we do not have information available for burials prior to 1997.