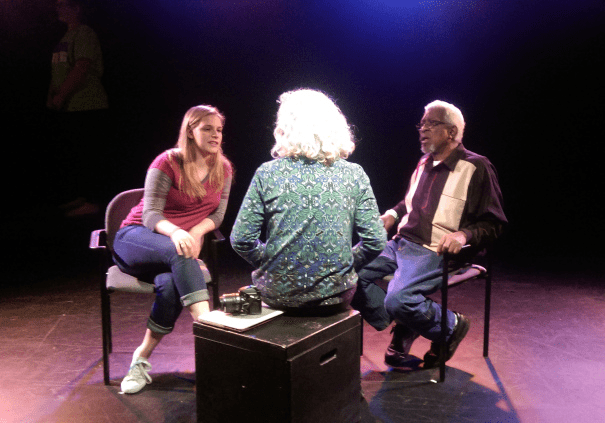 I spent some time over the past few months talking with Quinnipiac University’s professor of drama Crystal Brian, and sitting in on her Theater for Community class. Brian partnered this term with Mary Lou Lauricella,a drama therapist at the West Haven VA. For the past 20 years, Lauricella has worked through VA Connecticut to facilitate a PTSD drama therapy group called the Veterans’ Homefront Theater Group. Over the semester, they guided the students in the class and Veteran volunteers got to know one another and created an improvisational performance piece which they presented together at the end of the term.

Brian and Lauricella each try to find ways for those they work with to interact within the local community, to proverbially walk a mile in someone else’s shoes. Sharing and finding ways to relate to each other can make it possible to bridge the gap between people who seem very different on the surface. It encourages the development of empathy.

Empathy is important, not least because it helps us to communicate our ideas in ways that make sense to others, and helps us to understand others when they communicate with us.

At the beginning of the project, some of the students worried about being able to understand the Veterans’ experiences. “I know I can sympathize,” Deanna Garofall said, but she didn’t want to just “feel bad” for Veterans, she wanted to know she could really understand and feel the emotions of their experiences – in other words, empathize with them.

This deeper kind of understanding is what Veterans need because for many Vets, readjusting to civilian life can be a confusing and difficult time. They may struggle to feel a part of their surroundings, but they still want to be treated like everyone else. Greater public awareness would help, so education was one of the outcomes the Veterans hoped to get from collaborating with the students.

“When it comes to Veterans, the public has a certain viewpoint that is not necessarily accurate,” said Greg Harrison, a 10 year Veteran of the Navy who later signed on with the National Guard. He envisioned serving his local community and helping in times of national emergencies, instead he was deployed to Iraq.

Harrison spoke about the regret and guilt he felt over missing the birth of his children. His wife found out they were expecting twins just before his deployment overseas, so he was absent for the physical experience of her pregnancy – seeing her belly grow, hearing their heartbeats and feeling them kick. Working on a convoy patrol he moved around a lot, but at each new forward operations base he would call so she could put the phone to her belly and the babies could hear his voice. He apologized to the group when his voice caught in his throat as he shared how he would sing to them and tell them, “Daddy loves you.” He was traveling and planned to be home for their due date, but the twins arrived early. Once Harrison was back stateside, he struggled to make sense of things.

“I lost my marriage, my job, my car,” Harrison said. “I’m still trying to put the pieces together.”

Although their experiences and emotions were uniquely their own, that depth of honesty was displayed by each of the Vets in different ways. The students were moved, sometimes to tears, but they also found ways to relate it to themselves.

George Labounty, like several of the Veterans who participated in the group, is a Vietnam Veteran. He opened up about his struggles after the war, including three suicide attempts and multiple hospitalizations. One of the topics he spoke about passionately is how Veterans’ experiences are not theirs alone when they come home; their families often bear the brunt of their anger and struggle alongside them. Labounty’s first wife was his support and his reason for fighting when he felt lost, so when he wrote a poem to channel how he felt, he titled it “My Country.”

When the students heard him read it aloud, they knew Labounty’s poem needed to be part of their eventual performance. One line talked about the role families played in trying to help their loved ones “like the medic when the wounded come home.” It resonated, especially with one student. Mickeala Sebok compared the feelings of Veteran families to her own feelings of frustration and helplessness when dealing with a serious illness in her family.

Maggie Richardson also made a personal connection as the Veterans opened up. “This experience has given me a lot better understanding of my grandfather who was a Vietnam Vet,” she said. “I appreciate this opportunity to understand more about his experience through all of yours.”

The Veterans also benefited from the exchange. For some, it was even a kind of therapy.

“Every time you tell your story it’s a healing,” said Lewis Mungo, another of the Vietnam Veterans participating.

“That’s one of the reasons I wanted to be involved,” Harrison said. “It’s a chance to exorcise my demons so I am grateful.”

Labounty also spoke about the responsibility that older Veterans feel for those who are returning home now. They want to ease the way by shining a light on their issues and making it easier for them to share their stories.

“I feel like my job was not done,” Labounty said. “My duty now is to take care of the country here.”

Mungo added that Veteran interaction with civilians was especially important to helping them transition back to civilian life.

“I try to make a difference in everybody’s life I can in a good way because then you do good things to their life,” Mungo said. “I want Vets to interact with civilians because I had the hardest time adjusting after I came back.”

On QU’s campus, the Student Veterans Organization works to support active duty military and veterans alike. SVO president Christopher Bolduc dropped by the class to share his thoughts on the project. He said he hoped it would bring a greater recognition and awareness to the issues that face Veterans, especially on campus. He spoke proudly of the fact that QU was currently at No. 26 on the “Best for Vets: Colleges 2016” rankings, a list they did not even make two years ago. However, he said there was still much to be done to educate the QU population and the wider public on the issues of suicide prevention, PTSD, medical and mental health care, homelessness and unemployment among Veterans.

Unfortunately, I had to go out of town the day before the performance, so I haven’t seen the final product yet. I’m looking forward to seeing a recording when I return. I do know that the work in progress was looking to contrast the experiences of a person who went to college against someone who went into the military in a series of short vignettes, adding in poetry, music and statistics. When I checked in with Brian, she was pleased with how it all went. They got a good audience who stayed for a long talkback after the performance. She said that she and Lauricella hope to continue this type of collaborative bridge building between the students and the Veterans.

Raised in Connecticut, Debora Timms’ journey took her to Australia for many years before bringing her full circle. She earned a B.A. in Journalism from Quinnipiac University and currently resides in Granby. This article originally appeared on Timms’ blog.