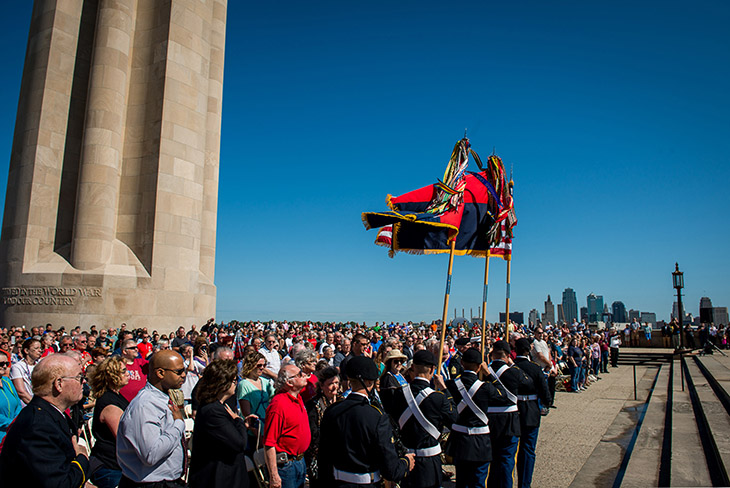 As Americans across the country prepare for Memorial Day weekend, it’s often quite interesting to see the variations in how people choose to honor the fallen men and women of our nation’s past conflicts. Some visit graves or memorials, some gather with family and friends and appreciate the freedom to do so as a result of others’ sacrifice, and still others have their own distinct way of paying tribute.

At the National World War I Museum and Memorial, an entire weekend of activities wholly unique to the Kansas City-based institution aims to both honor and remember those who gave their lives in service to the United States, while simultaneously acting as a gathering place for members of the community to do the same. We are certainly privileged to host commemorative events at one of the largest war memorials in the world.

From Friday to Monday (May 27-30), Veterans and active duty military personnel are provided free admission to the Museum, which offers a host of events throughout the weekend for people of all ages and interests, including a free public ceremony on the morning of Memorial Day featuring former Chairman of the Joint Chiefs of Staff General (Ret.) Richard Myers. Other events include a display of a Vietnam era Bell UH-1 Iroquois “Huey” helicopter and as an array of nearly 20 vehicles from the Military Vehicle Preservation Association.

One of the greatest ways in which the Museum pays tribute to the men and women who served, along with their friends and family, is through the Walk of Honor program. More than 11,000 inscribed granite bricks lead up to the Museum entrance, with three distinct sections: those who served in World War I; Veterans of any military service; and bricks honoring civilian friends, family members or organizations. Following the Memorial Day ceremony in the morning, the Museum will dedicate more than 100 additional bricks during a program featuring former Arlington National Cemetery “Old Guard” member and former Director of The Army Center for Lessons Learned Colonel (Ret.) Thomas Roe.

As the centennial of World War I continues (2014-19), the National World War I Museum and Memorial serves as a beacon in not only the United States, but across the world and is a most fitting place to remember and immortalize those who gave the ultimate sacrifice in the name of freedom. If you’re unable to join us on Memorial Day, we welcome you at a later time and would encourage you to visit our website, which features extensive information, photos and videos about one of the most significant events in human history and how the Great War affects us to this very day.

Lastly, I would like to personally thank all veterans and active duty military personnel for your service – we are forever indebted to you.

Dr. Matthew Naylor is president and CEO of the National World War I Museum and Memorial.