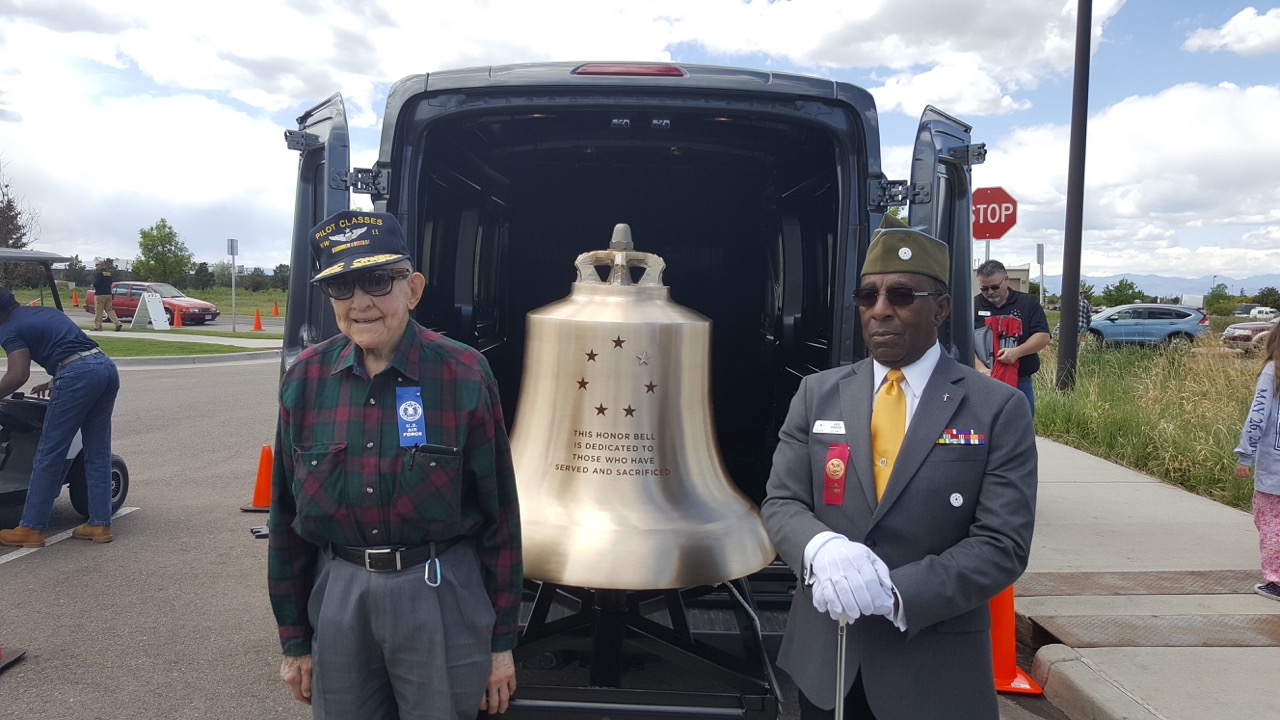 Our nation has always been fortunate. Through the decades, our citizens have defended our communities as members of the armed services. On land, at sea and in the air, many have given much to maintain the American ideal. Veterans who have sacrificed selflessly by serving our country deserve funeral honors that pay fitting tribute to their service.

The Honor Bell on display at its dedication in Fort Logan National Cemetery, Colorado, on Memorial Day. Photo by Tony Clapp

Throughout history, bells have tolled to focus a community’s attention. An honor bell rings in remembrance, its dignity complementing the tradition of military funeral rites, its beauty offering a note of solemn reverence. In 2014, the Honor Bell Foundation was formed to create a community of Veterans to foster public appreciation of military service and honor their fellow Veterans with a proper, final tribute. And just last month, the instrument for this tribute was cast: the Honor Bell.

The Bell is a 1000-pound bronze instrument specially forged from the legacy of heroic servicemen and women and tolled exclusively for funeral rites and memorial ceremonies to signal a nation’s respect and sound its loss. Mixed into the molten metal at the time of casting are military service-related artifacts from 12 deceased Veterans. These artifacts, from enlisted and commissioned members of all five branches of service and all major conflicts from World War II through the War on Terror, represent all members of the Armed Forces who answered the call to serve.

Medals from deceased Colorado veterans are placed into the molten bronze used to cast the Honor Bell in Cincinnati, Ohio. Photo by Alan Bucknam

After being fabricated and finished by the Verdin Company in Cincinnati, Ohio, the Honor Bell was placed into a customized Bell Transport Vehicle: a large van with a specialized tray on which the bell was mounted. The tray allows the bell to be rolled out into view and be tolled at Bell Honors Ceremonies. Bell Honors, performed by a corps of Veteran volunteers, is a complimentary service offered to families of Veterans. At the conclusion of an interment ceremony, after the flag of the United States of America is presented to the next of kin, the bell Honor Guard will toll the Honor Bell with seven solemn tolls, signaling a communal acknowledgment of the departed’s sacrifice and showing respect and gratitude for their service. When Bell Honors are concluded, the bell can then be secured inside the vehicle and transported.

The first Bell Honors Ceremony took place as part of Major League Baseball’s celebration of Armed Forces Day at the Great American Ball Park—home to the Cincinnati Reds. See video of it here. After the inaugural ceremony the bell began its journey to Colorado, escorted by members of Rolling Thunder and the Patriot Guard Riders and the Cincinnati Police. As the bell team made its way to the Mile High State, the Honor Bell was used to perform Bell Honors at four national cemeteries in Illinois, Missouri, Kansas, and Colorado. Over Memorial Day weekend members of the public had a chance to meet the Bell Guard and see the brand new three foot-high bell in person. The Honor Bell was dedicated in a ceremony on Memorial Day at Fort Logan National Cemetery in Denver.

Bell Honors are offered at no cost as a service to any Colorado Veteran interred at Fort Logan, as well as community memorial ceremonies honoring deceased Veterans. To learn more about Bell Honors, the Honor Bell, its mission and its symbolism, please visit HonorBell.org.

About the author:  The Honor Bell Foundation submitted this article to Vantage Point. Honor Bell Foundation, Inc. is a Colorado nonprofit, 501(c)(3) organization founded in 2014 and based in Denver. Its mission is to create a community of Veterans to foster public appreciation of military service and honor their fellow Veterans with a proper, final tribute. The Foundation also conducts multigenerational outreach throughout the veteran community, and is developing an education program aimed at promoting the significance of dignity, honor and respect owed to our military and fallen heroes.