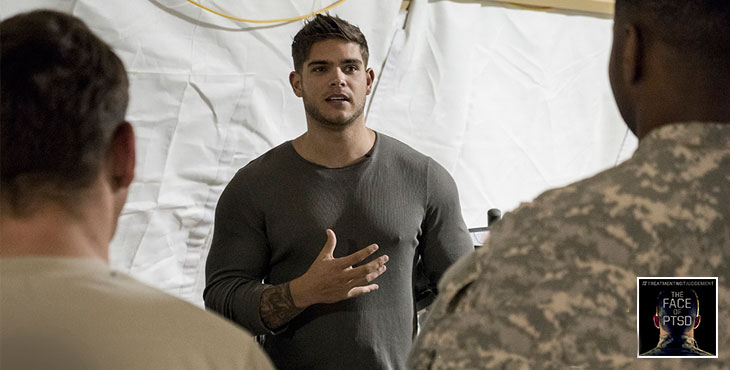 When a 107-millimeter rocket exploded three-and-a-half feet away from Colin Wayne Erwin in Paktika Province in Afghanistan, the former Alabama Army National Guardsman and DoD contractor miraculously survived, walking away with a lumbar contusion, permanent tinnitus and shrapnel in his arms, stomach and leg. But he also came home with post-traumatic stress. Four years later, Colin Wayne, as he’s known professionally, is a well-known sports and fitness model who is sharing his story in the hopes of helping others.

Since the rocket attack four years ago, Wayne returned to the Middle East as part of a USO celebrity tour, a trip covered by filmmakers from Malka Media. Wayne and Malka Media are now working together on a new documentary, “The Face of PTSD,” to help raise awareness of post-traumatic stress.

“My involvement with Malka Media productions on this project came from working on some former projects with them,” Wayne said. “This particular documentary has been discussed for over two years.” It’s something that Wayne says “hit home for both us … bringing awareness to PTSD and Veteran suicide” as issues within the Veteran community.

“We believe that the mainstream media has chosen to go with stories that have shock value, rather than telling the stories of Veterans who deal with the disorder but still lead highly productive lives,” the film’s director, Derek Brown, recently told Military Times. “The Face of PTSD” is in pre-production and recently launched an Indiegogo campaign to help fund the full length documentary.

Wayne says, for him, it took family pointing out that he had changed. “My mom actually was the first person to tell me, ‘Colin, something’s different with you.’” His advice for other Veterans is to not be afraid to seek help.

“The biggest issue with a lot of Veterans, in my opinion, is that they don’t want to admit that there is a problem, much less a mental problem,” Wayne said. As for friends or family who may need help, he said “Let them know that you are there for them, and that you do care.”

For Wayne, who sought treatment after returning from overseas, fitness was part of his answer. “I saw a psychologist when I got back from Iraq and Afghanistan and they both advised me that physical fitness was a great activity to help me mentally, as well as physically.” His advice to others? “Join a gym and keep yourself accountable to continue to work on your body, which in turn helps you mentally.

June is national PTSD awareness month. You can help raise awareness by joining VA’s efforts to spread the word about PTSD and effective treatments. Learn, connect and share. Everyone makes a difference.