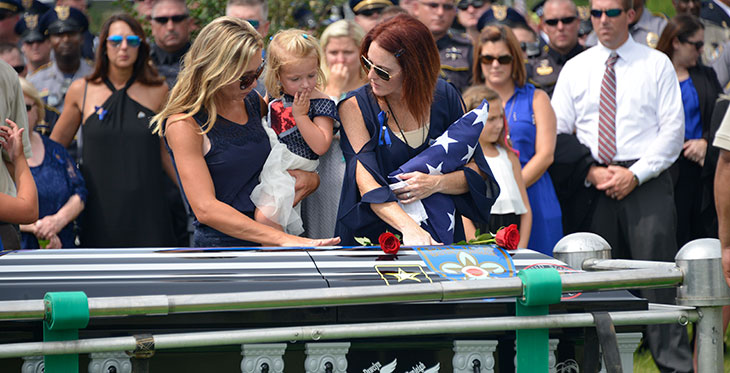 It was another steamy morning in the south when Louisiana National Cemetery Director Maurice Roan and his seven-member crew set out to prepare for four services scheduled July 22.

“It’s going to be a hot one,” Roan said as he directed a media satellite truck to a location that was a respectful distance from the tent set up to house the final service of the day, more than four hours before it was scheduled to start.

Under a cloudless sky, the first three services were seamless and the team moved quickly and efficiently.

“We have a strong crew here. Most people don’t see the work we do, but we have a good team ready to support the friends and families who come here,” said Roan.

True to form, they were prepared as the final motorcade arrived just 20 minutes after the previous outgoing services. With it came more than 1,000 supporters of fallen Baton Rouge Police Officer Matthew Gerald, who served in both the Army and the Marine Corps.

They came in droves and converged onto the cemetery grounds, creating a human barrier around the services. Made up of law enforcement officers, soldiers, Marines, sailors, Patriot Guard members, friends, family and those who wanted to support the fallen officer. They quietly stood by to honor Gerald.

“I heard a law enforcement officer tell the family that officers from all 50 states and Canada were represented here today,” said Roan.

A rifle vollet was presented by a joint Louisiana State Police and Baton Rouge City Police Honor Guard. Fourteen media outlets from across the country covered the services.

“I have mixed feelings,” said one reporter. “I have to cover the story, to let the country see this, but I’m still taking pictures at a funeral.”

Throughout the day, many of the reporters reflected the same sentiments, careful not to step too close or move too quickly so as not to disturb or disrespect the family and friends, several taking momentary breaks to overcome their own emotions during the service.

“It’s been to Ground Zero and even to outer space,” said one Colorado law enforcement officer, who appeared honored to be a part of the team presenting it.

Just before the conclusion of the short burial service, as the family members each dropped single roses onto the casket to say their final goodbyes, four law enforcement helicopters flew overhead, airing a single police siren.

“It was a nice event,” Roan said modestly just before giving his team a few final instructions once the grounds were empty again.

Fifty flower stands had arrived early that day for Gerald and usually one or two are left at the head of the gravesite for the remainder of the day.

“Which one should we keep, sir?” asked one of the crew members.

“Let’s keep them all,” Roan replied. “The family will come back on their own and they’ll want to see these. Let’s leave them for the whole weekend.”

About the author:  Amanda Jones is the chief of community and public relations at VA’s Southeast Louisiana Veterans Health Care System.