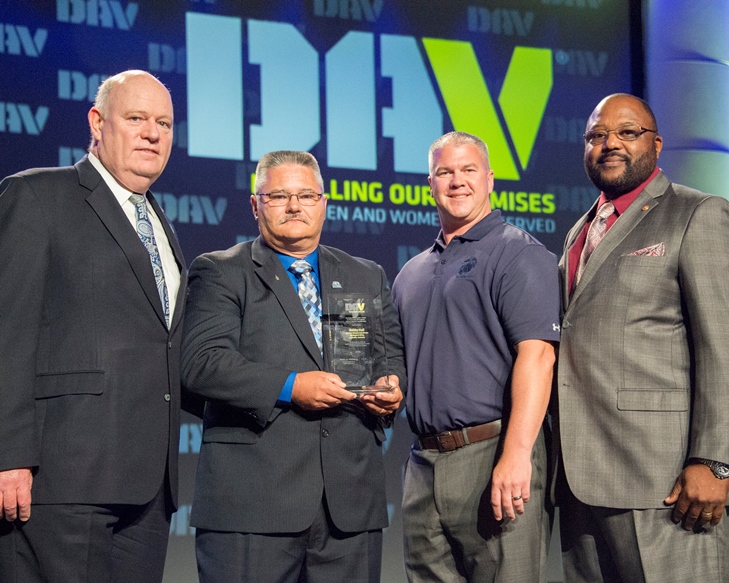 “It comes as no surprise that Bobby Hall has been recognized within the VA for his dedication, knowledge and ability to get the job done,” said DAV National Commander Moses A. McIntosh, Jr. “Bobby epitomizes Veterans helping Veterans, and DAV is honored to commend him for going above and beyond to take care of his brothers and sisters in arms.”

Hall serves Kentucky and Southern Indiana’s terminally ill Veterans at the Louisville VA Regional Office. He works with Veterans and their families to ensure all required documentation is submitted, and then coordinates with his VA peers to ensure a timely and accurate decision on their claims for benefits. Recognizing that many of his clientele are unable to travel, Hall ventures throughout the two states on his own time to connect with Veterans face to face.

“DAV’s advocates in Louisville know if you bring one of these cases to Mr. Hall, it will be completed quickly,” said DAV National Service Officer Supervisor Richard Vaccari. “We who have worked with Mr. Hall know that he is a person who will go over and above to provide assistance to local Veterans.”

A decorated combat Veteran, Hall retired from the U.S. Air Force in 2007 after 20 years of honorable service. He has a Master of Science in Business Communications and a Bachelor of Science in Business Administration, both from Spalding University in Louisville, Kentucky. Hall began his career with the VA in January 2014, serving as a Veterans service representative.

DAV empowers veterans to lead high-quality lives with respect and dignity. It is dedicated to a single purpose: fulfilling our promises to the men and women who served. DAV does this by ensuring that veterans and their families can access the full range of benefits available to them; fighting for the interests of America’s injured heroes on Capitol Hill; providing employment resources to veterans and their families and educating the public about the great sacrifices and needs of veterans transitioning back to civilian life. DAV, a non-profit organization with 1.3 million members, was founded in 1920 and chartered by the U.S. Congress in 1932. Learn more at www.dav.org.