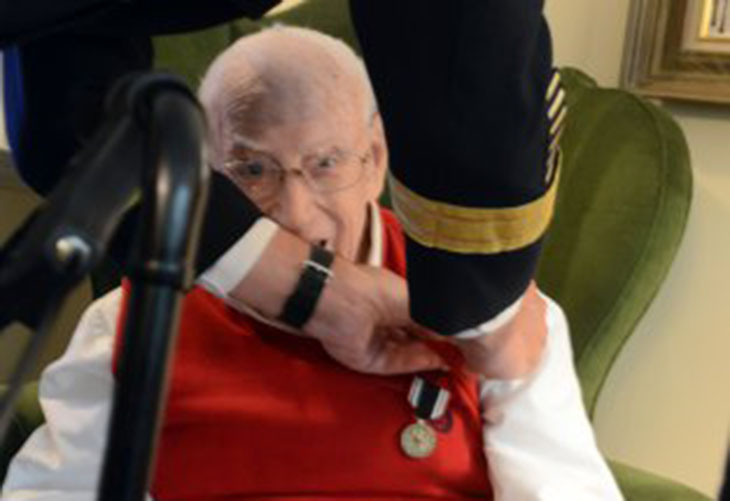 This story originally appeared on www.Army.mil by David Vergun of the Army News Service.

Although the POW Medal was a long time in coming, Stenger, who is still sharp and relatively strong at 94, said it was a proud moment and he was honored by the Soldiers who came to witness the event. He was reluctant to discuss his wartime experiences, but he said it was okay for his wife of 15 years, Mary Lou Guandolo, to relate some of what took place.

During the Battle of the Bulge, Stenger fought in the Schnee Eifel salient of Belgium, serving as a medic with the 423nd Infantry Regiment, which was attached to the 106th Infantry Division, she said.

On Dec. 21, 1944, Stenger’s regiment was overrun and surrounded by the Germans. He and his fellow Soldiers fought back, but it soon became clear that they faced certain annihilation. Stenger found a white piece of cloth and surrendered the remaining men, she said.

He was one of 6,697 prisoners who were captured during the surprise German offensive.

He was held at multiple prison camps until the end of the war, Guandolo related. During his transition from one camp to another, he was locked inside a boxcar that was strafed by the allied forces. Stenger was blown completely outside of the boxcar, landing on his back.

Disabled by injuries from that explosion and frozen feet, Stenger faced hardships as a POW. The food that he and the other POWs were given was so lousy that they had to forage for whatever they could find near the prison camp.

One happy occasion during his time as a POW was when Stenger found two bottles of wine during a foraging expedition. He stuck them up his sleeves and shared the wine with his fellow POWs, a much needed morale booster.

In addition to presenting Stenger with the medal, McConville also presented him with a “Soldier for Life” sticker and pin and a commander’s coin. Stenger expressed pride for his service and said he considers himself honored to be counted among the Soldiers for Life.

McConville noted that, even after Stenger was honorably discharged from the Army at the end of the war, he continued to serve Soldiers as a psychologist in the Veterans Administration, as the Department of Veterans Affairs was then called.

Records from the VA indicate that, among the Stenger’s many contributions, he was instrumental in assisting former POWs with their psychological needs.

As a former POW himself, he could especially relate to them. He served there from 1947 until his retirement in 1980.

POW Medals are awarded to combat Veterans who were taken prisoner during time of war, with the stipulation that during the time they were being held, they acted honorably.