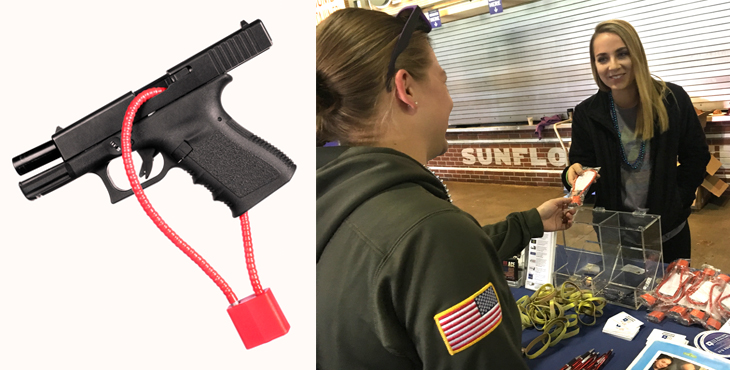 September is Suicide Prevention Month. As this month comes to a close, it is important to remember that it is always the time to be there for the Veterans and Servicemembers who may need your help. Learn more about how you can #BeThere.

I call these statements myths because research shows the contrary. A nice overview of the evidence in this area can be found on the Harvard T.H. Chan School of Public Health’s Means Matter project website.  One of the articles included in the review, from 2009, showed that for almost half of the study’s participants, the time between one’s first thought of suicide and making an actual attempt was 10 minutes or less.

Recent VA research indicates that 66 percent of Veterans who die by suicide are dying from firearm injuries. Given that the majority of deaths result from using a firearm, and people who are having suicidal thoughts are often acting on those thoughts very quickly, the problem seems to be the combination of a fast progression of thought to action and the use of a  method that is highly lethal.

It is very scary to imagine someone in crisis who starts having suicidal thoughts and then makes a suicide attempt with a firearm within 10 minutes.

While this situation may seem hopeless and anxiety-provoking, it actually offers an opportunity for intervention. If enough distance could be built in between the person who is having suicidal thoughts and the action with a lethal method, there may be enough time for the crisis to pass without the person ever making a suicide attempt.

In 2014, VA released a video about gun safety to promote safe firearm practices that may increase exactly that distance between someone in crisis and his or her use of  a firearm, ultimately preventing tragic outcomes like suicide.

VA also provides free cable locks for safe firearm storage. I can attest that our Rocky Mountain MIRECC will provide as many locks as the Veteran or the Veteran’s loved ones desire.  In fact, we bring them by the boxful to community events, presentations, and any other place where they may be distributed to those who need them.

At nearly every event I attend in which we give out cable gun locks, I see people hesitant to grab any, ask if they are allowed to take one, and then look at me with surprise when I encourage them to take as many as they’d like.

In fact, just a few months ago we had a table at an event in the community where both Veterans and Servicemembers were present. I remember a young Servicemember who approached our table and started making small talk.  He respectfully expressed his gratitude for the event and then made his way to the end of the table where the gun locks were.  He picked one up and stated, “Oh these are cool.  People use these?”

As he went to put it back on the table I said, “Please take some. We hope that all of these are taken today.”  He still looked hesitant as he picked the lock back up.  He then smiled, and timidly said, “Thank you.”  As he started to walk away, I encouraged him to take more.  “Please, we really don’t want to take any of these back with us.  Take as many as you want.”  He laughed and ended up taking five or six with him.

A cable lock is a tool. There are many tools that may be used to slow down the process and facilitate distance. Cable locks, trigger locks, and gun safes (just to name a few) are all tools that may interrupt the fast progression of thought to regrettable action.  But, if those who are in need of the tools do not know that they exist or how to get them, the tools are useless.  Further, unless these tools come with information about their importance and how to use them, they are relatively useless.

MIRECC stands for Mental Illness Research, Education and Clinical Center. Education, which involves making knowledge and resources accessible and usable, is essential for us to realize our mission of preventing Veteran suicide.  This is why we are in the community, spreading the word about what is available and providing these resources for free.  We are making information more accessible with our website and podcast channel, where we have an episode specifically dedicated to firearm safety.

We are working to develop refined interventions and tools to be adopted by both providers and patients, such as cable locks that have the Veterans Crisis Line phone number on them, and information about suicide prevention in the packaging. And we hope that Veterans, their loved ones, and any stakeholders of Veterans’ health and suicide prevention realize how relatively simple, safe, firearm storage practices may keep those at risk safe.

If you or someone you know is in crisis, reach out and call 1-800-273-8255. Veterans and Servicemembers, press 1. You can also chat online at VeteransCrisisLine.net, or send a text message to 838255. Confidential support from caring VA responders is available 24 hours a day, 7 days a week, 365 days a year.

This blog is based on work supported, in part, by VA, but does not necessarily represent the views of the Department of Veterans Affairs or the United States Government.

Melodi Billera, LCSW, is a social worker at VA’s Rocky Mountain MIRECC for Suicide Prevention. Billera joined the MIRECC in 2012 and currently serves as an investigator, member of the education core, and training committee faculty member. She is especially interested in translational research and the dissemination and implementation of evidence-based practices, educational products, tools, and resources for at-risk Veterans and their loved ones.