Home / Honoring Vets, Top Stories / Taking pride in service: A Veteran remembers those who fought before him

Taking pride in service: A Veteran remembers those who fought before him 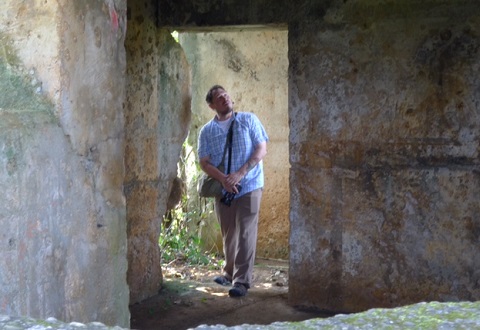 This article is an update from a previous VAntage Point post by the author.

I am the embodiment of my parents’ American dream. Just one generation removed from their lives in Mexico, I was taught to be proud of my culture and language, and be thankful for the opportunities I had as an American.

But as informed as I was about my heritage, and new ability to “be whatever I wanted to be,” I still grew up mostly unaware of how other Hispanic Americans – especially from South Texas – bridged the cultural divide and made contributions to the melting pot.

That changed when I learned about Sgt. Alfredo Gonzalez during a school field trip.

Alfredo Gonzalez survived a year-long deployment in Vietnam, and was back home when he got word that many of the men he served with during his first tour were killed in an ambush. He quickly volunteered for a second tour, and in May 1967, only three months after returning stateside, the Marine Corps agreed to send him to war for a second time.

He was assigned to 1st Battalion 1st Marines, Alpha Co., when the “First of the First” was sent to reinforce other Marine units during the Battle of Hue. Gonzalez led his Marines through the besieged city with distinction. He was injured during the battle, but continued to take the fight to the enemy successfully using anti-tank weapons to destroy North Vietnamese rocket positions and repelling a massive attack.

Sgt. Alfredo Gonzalez (right) stands with another Marine during his second tour in Vietnam in 1967.

On Feb. 4, 1968, Gonzalez died from the injuries he received in battle. His selfless actions and courage in Hue were recognized a year later when his mother was presented her son’s Medal of Honor.

I recently traveled to Viet Nam with Veterans who served in the U.S. Army during the war. We traveled and explored the countryside from Saigon to Khe Sanh over the course of two weeks. It was an eye-opening experience to see Veterans return to their former bases and area of operations (AOs), now developed with factories and new homes, and interact with a country they once considered a battle field. I wondered, sometimes out loud, if my generation would ever be able to wander the streets of Iraq without a rifle too.

During our last week, after returning to Hue from the DMZ, I was walking to a local café with Doug Young. Doug, a veteran of two tours in Vietnam as Army officer, had traveled to the country as a civilian before. He taught English at a university in Hue with his wife Cindy, who is also a Vietnam War Veteran, and was familiar with the ever-growing city. As we approached a church and a school yard, via a tiny, quiet street, he reminded me of the battle that raged in the city during the Tet Offensive, and Sgt. Gonzalez.

“This is where Freddy died,” he said.

I knew the importance of Hue in both Edinburg and Marine Corps history, but the peacefulness of the area made the realization of where I was standing that much more shocking. We walked into the Catholic Church, and then made our way across the street toward the school. I was saddened and humbled by the experience as I tried to image how the battle might have raged from one building to the next, and what Sgt. Gonzalez was seeing as he fought forward for his Marines. A boy from Edinburg, who frequently visited Sgt. Gonzalez’ name on panel 37E, line 21, of the Vietnam Memorial in Washington, D.C, was walking in footprints of his childhood hero a half-a-world away and almost 50 years after his death.

I thanked Doug for showing me the location as we walked away. We talked about the war, the Tet Offensive and how I was just as proud to be from Gonzalez’ hometown as I was of my own service as an infantry Marine.

Instilling that sense of pride is exactly why it’s so important to recognize the contributions of the Hispanic American community in this country. Hispanic Heritage Month provides our young people with positive examples of service and ingenuity from within their community.

This is especially true when it comes to our history of military service, which goes back to the Revolutionary War. Our mark on the United States is complex, and Servicemembers like David Farragut, Marcario Garcia, Roy Benavides, Silvestre Herrera, and every Hispanic American who continues to wear the uniform today proves that.