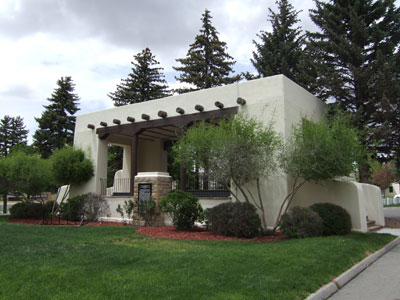 Today I’d like to share the stories of two Hispanic-American veterans interred at Santa Fe National Cemetery. Both are Medal of Honor recipients.

But before I share their stories, I want to recognize that there is a great and growing tradition of veterans who continue to add to our nation’s legacy. And in this month, we are focusing on Hispanic-Americans and their contribution to our national veterans’ legacy.  When we focus on those who received the Medal of Honor, we do so because they stand out.  They inspire us with their selflessness, their bravery.  They put their fellow soldiers, Marines, airmen, and sailors before themselves.  They display the best of a great tradition.

So many Americans have built that tradition. When I was in basic training, my drill sergeant told us that no one joins the service with the goal of earning the Medal of Honor, but we should go forward into the service exhibiting the ethic, initiative, and values of an American soldier who will always do his duty.  These soldiers certainly did their duty, above and beyond the typical call.  When we learn about these heroes, the people they were before they put on the uniform, we discover that they were soft-spoken, kind, well-liked, and neighborly.  They never sought fame or glory.  They did their duty with great heroism, but they did it in a way that reflected their hometown and community.

PFC Jose Valdez was born in Gobernador, NM. Like so many of “The Greatest Generation,” he did not wait for his draft notice.  He enlisted in the Army as soon as he was able, in 1943.  Two years later, five days after his twentieth birthday, he was with his unit, the 7th U.S. Infantry Regiment in the 3rd Infantry Division, in Rosenkranz, France.

On a cold, snowy morning, he was on guard duty when an enemy tank and two companies of infantry charged his position from the woods.  He returned fire and single-handedly repulsed this attack, allowing the rest of his company to move to safety.  Even after he was wounded, he held his position until all patrols from his company returned safely.  And then he called for artillery and mortar fire.  He eventually got himself back to his unit, but unfortunately he would succumb to his wounds several days later. PFC Valdez was awarded the Medal of Honor for his gallantry.

His example inspired those who served with him to bring the memory of his heroism to his home community in New Mexico. When Abundio Castro visited the Gobernador, NM home of his comrade, he observed, “He was a soldier you would want in your outfit. […] He was the type of fellow to stay awake all night, guarding and guarding. He was always alert and quiet. That keeps up morale. […] Now that I see where he came from, I realize his senses were sharpened by this country.”

SP4 Daniel Fernandez served in a different era. Born when PFC Valdez was in France, he served in Vietnam.  But he joined the Army in 1962, before the conflict in Vietnam intensified.  SP4 Fernandez was born in Albuquerque, but grew up in Los Lunas.  Hua Nghia province of the Republic of Vietnam must have felt like a completely different world to him.   But in 1966, it was home to C Co. of the 1st battalion of the 5th U.S. Infantry Regiment of the 25th Infantry Division.

On a February afternoon that year, SP4 Fernandez’s patrol was ambushed by Viet Cong. Amid “devastating fire and exploding grenades,” he and his sergeant went to the assistance of a fallen comrade.  Once they reached him, his sergeant was struck in the knee.  SP4 Fernandez reflexively took charge and maneuvered the rest of the squad to provide cover in order to evacuate their two fallen comrades.  In the middle of aiding the wounded, a grenade fell in their midst.  And before half of the squad could even see it, SP4 Fernandez threw himself onto it, saving the lives of his squad.

SP4 Fernandez is the first Mexican-American of the Vietnam conflict to receive the Medal of Honor.

His name is on the wall of the Vietnam Veterans Memorial.

Please also see what those who knew him have to say about him on this “virtual Wall.”  Daniel Fernandez was another quiet, soft-spoken scion of New Mexico.  He is remembered and admired by his community and his nation.

We’re proud to share the stories of PFC Valdez and SP4 Fernandez. They stand as but two examples in the great tradition of service among Hispanic-Americans.