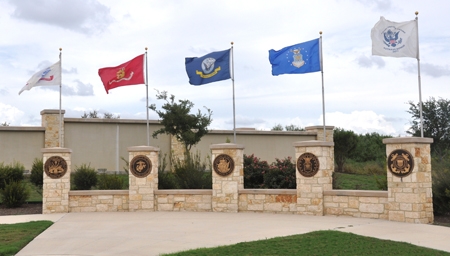 Carlos G. Martinez’s contribution to our nation’s Veterans’ Legacy is impressive and unique. NCA intern Maari Weiss now shares with all of us the service of Mr. Martinez in her next Veteran Spotlight. A veteran of two branches of service and three wars, Mr. Martinez exemplifies patriotism and service that will stand as an inspiring example to so many generations. We’re pleased to include his story of service as part of NCA’s commemoration of National Hispanic Heritage Month. By reading his story here, you also honor his service. And if you find yourself in San Antonio, TX, you can visit his grave site at Fort Sam Houston National Cemetery.

As a young boy, Carlos M. Martinez immigrated to the United States from Mexico. He grew up in this country, got married, and started a family with his wife, Luz. Their son, Carlos G. Martinez, grew up in Tucson, AZ and El Paso, TX before joining the United States Armed Forces, serving in the Navy in World War II and in the Air Force in both the Korean War and the Vietnam War.

Carlos G. Martinez enlisted in the Navy in 1945, the day after he turned 17. In his interview with Aric J. Garza for the Veterans History Project, he said that, “Every young man that was 16 and 17 years old could hardly wait to get to that age so that he could join the military…to fight for the U.S.” Although his mom was reluctant to sign the form that would allow him to join the Armed Forces, she eventually agreed. However, she did not want him to enter the Army Air Corps, because members of the Air Corps could be brought into the infantry if the Army needed. She was simply concerned for her son. Mr. Martinez “loved airplanes,” but he lacked the college education necessary to become a pilot, so he decided to try to become an air crewman in the Navy. He recalled that “[he] wanted to be a Gunner. And what they had, then, was a Douglas Dauntless. It was a dive bomber.” By passing a physical and a written test, he seemed to be on track to turn his plan into a reality, but then he was told that the Navy had too many air crewmen, and it was not bringing on any more men for that job. Instead of giving up completely, Mr. Martinez decided to enter the “regular Navy.”

When Mr. Martinez joined the Navy, he was sent to San Diego Naval Training Center for recruit training, but since “the written tests…showed [he] was mechanically inclined,” the Navy removed him from basic training and placed him in engineering school. There, he learned about “working below decks, in the machinery and the engine room…[with] all the machinery that makes the ship move.” Once Mr. Martinez finished this schooling, he was assigned to work in the engine room of a Landing Ship Tank (LST) in the Seventh Fleet, inspecting equipment, recording test results, and gaining experience working with the particular machinery of the ship. As its name suggests, an LST was “a ship that carried tanks… [and] any kind of equipment: trucks, two-and-a-half-ton trucks, just about anything, really.”

From San Diego, Mr. Martinez was sent to the Philippines “in the middle of May,” 1945. After taking a few trips back and forth between the Philippines and the Japanese island of Okinawa aboard his LST, Mr. Martinez was transferred to “a fleet tanker, the USS Chepachet.” He was still out in the Pacific Theater when the United States dropped atomic bombs on Hiroshima and Nagasaki in August of 1945. He received the news in an announcement “over the PA system” and also in “an information sheet” that the ship circulated. In describing his immediate reaction to the news, Mr. Martinez recalled that “We were glad. We were happy. …[W] didn’t know what they were talking about when they said ‘atom bomb,’ an atomic bomb. But we liked the results, […] you know, you’re just letting your emotions run with you.” Nine or ten months later, when he was sent to Sasebo, Japan aboard the USS Rutland, Mr. Martinez saw Nagasaki for himself, and it was emotional for him and his shipmates.

Mr. Martinez left active duty in August 1946, staying in “the Navy Reserve, what they called back then, Organized Reserve,” while living and working as a civilian. Two years later, feeling as though his civilian job “was a dead-end,” he “decided to go back in the Navy[,]…requesting active duty.” Thinking that a destroyer “was the best ship a guy could get in the Navy,” he requested an assignment on a destroyer and was assigned to the USS Fitch, DMS-25, destroyer for a year. As it turned out, he later thought that he “would have preferred to have stayed on that tanker.”

When the Korean War began, “all enlistments were extended one year,” but, rather than continuing with the Navy,

Mr. Martinez decided to enter the Air Force “in the aircraft maintenance field.” He was sent “to Kimpo Air Force Base[,] …just a little bit north of Seoul[,] …[and he] got assigned to the Fourth Fighter Interceptor Wing.” The North Koreans tried, unsuccessfully, to invade Kimpo, and Mr. Martinez and his fellow soldiers endured occasional bombings, but, as with World War II, he managed to make it through unscathed.

During his time in the Air Force, Mr. Martinez asked to be assigned to work in Europe, and his wish came true when he least wanted it. In 1952, Mr. Martinez married his first wife, Ruth Spann, at Fort Bliss, TX. Soon after the wedding, he got the news that the Air Force was sending him to Lakenheath, England, UK for four months.

Mr. Martinez was still in the Air Force when the conflict in Vietnam escalated. He was stationed in Colorado Springs, working as a maintenance inspector. Then, he was sent to Clark Air Force Base in the Philippines. “Everybody in the maintenance field went to Clark because of Vietnam. …[F]rom the Philippines, they would send you TDY [temporary duty] to Vietnam.” On TDY, a single person, not a unit, could be sent to any combination of four aircraft bases: Bien Hoa, Tan Son Nhut, Phan Rang, and Da Nang. Each TDY rotation lasted for three months and was followed by one month at Clark. Mr. Martinez remembered that he “got back to Clark right before that Tet Offensive,” but his time in Vietnam was marked by harrowing experiences in which the North Vietnamese often launched rocket attacks at his base. In describing the attacks, he said “There was no warning. …Just all of a sudden, an explosion. And then one after another one, right after that.” In 1971, Mr. Martinez retired from the Air Force “as a Senior Master Sergeant,” having received 19 medals for his service in three wars. He then got a job continuing his work “in the maintenance field” as a civilian at Davis-Monthan Air Base in Tucson, Arizona, and he worked there until he retired in January 1987.

Mr. Martinez had three daughters and three sons, plus many grandchildren. Carlos G. Martinez passed away on January 16, 2016, and was laid to rest at Ft. Sam Houston National Cemetery, in San Antonio, Texas. We honor his service.