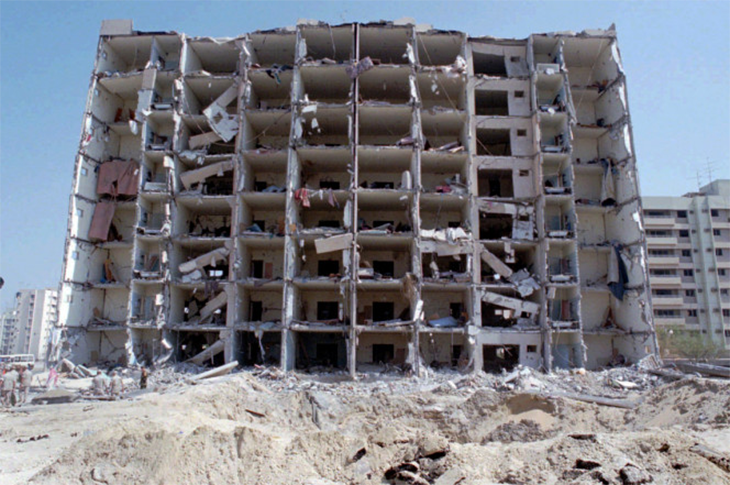 An exhausted services Airman takes a break in a library after a long night of work in Dhahran, Saudi Arabia.

On the upper floor of a different building in the Khobar Towers military dormitory, a junior officer is preparing for bed and an early day.

More than 7,000 miles away, a services Airman in the Air Force Reserves is preparing to report to active duty the next day, on June 26, 1996, at the Port Mortuary on Dover Air Force Base.

All three Airmen’s lives, and many others, would forever change that night.

Around 10 p.m., on June 25, 1996, the Khobar Towers in Saudi Arabia were rocked by a massive explosion, and the ripple effect of the blast would be felt for decades.

Twenty years after the attack on the Khobar Towers, three survivors of the bombing and its aftermath work side by side at the Air Force Mortuary Affairs Operations (AFMAO) on Dover. With the night of the attack and the days immediately after seared into their memories, they reflected on their similar journeys.

Far removed from that summer night in 1996, an uncanny coincidence has brought them together surrounding the month and 20th anniversary of the attack.

They are Air Force leaders and experts now in the esoteric field of military mortuary affairs, honoring all fallen members of the Armed Forces.

Air Force Mortuary Affairs Operations, which was called Port Mortuary back when the Khobar Towers were attacked, is often described as the best-worst place to work. It is the most exclusive assignment for services Airmen.

AFMAO Commander Col. Dawn Lancaster was a first lieutenant and assigned as a protocol officer when the attack happened. She said before her room was rocked by the explosion and she was jostled violently on her bed — a couple buildings away from the structure that was directly impacted — her biggest concern was waking up early enough to set up for a change of command the next morning.

Darkness. Smoke. A surreal serenity permeated the immediate seconds following the blast and its aftershock. Downstairs, outside, she said she found more darkness, more smoke.

In the basement recreation, library and eating area of another building, then-Senior Airman Meshelle Lemon had just worked a full shift as a recreation specialist. The now-AFMAO chief enlisted advisor, Chief Master Sgt. Meshelle Dyer, said she would have been in her room had she not been invited to midnight meal by a co-worker.

“She might have saved my life — or at the very least saved me from getting injured by flying glass,” Dyer said. With her photographs from that earlier time spread out on a table in her office, she examined the wreckage of that time from her past. “I had just gotten off shift and was exhausted, but I was more hungry than tired — so I waited for her, thankfully.”

Dyer’s basement work area was like a bunker; she was shielded by the high, small windows, and by a couch and a stranger. “There was a guy reading a book at a table behind the couch, and he jumped over the couch and shielded me from flying debris.”

The instinct to help, to protect, to secure, all came as second nature to so many, Lancaster recalled.

“When I got outside, there was so much dust, smoke, people walking around confused, dazed, bloodied.” But something caught her eye in the distance and it stayed with her for more than twenty years—partially attributed as the reason she’s still in uniform today. “I saw two guys carrying another guy on their shoulders; his legs were bloodied. I saw so many strangers helping each other. Everyone just helped.”

Lancaster assumed command of AFMAO a few days after the June anniversary of the attack, and she hired Dyer during that anniversary month. Neither woman knew that the other was a fellow survivor.

“We didn’t even know each other when we were stationed there,” Lancaster said, recalling that her deployment was nearly over when the attack happened.

Dyer said she was beyond green back then. “It was my fifth day there. We were locked down.”

Through the softened lens of years, for two survivors of the Khobar Towers attack the tragedy became the very reason they found themselves working together, both in leadership roles at the sole state-side military mortuary — serving the fallen.

When asked if the attack galvanized their sense of belonging in the Air Force: “Definitely, it’s the reason I still serve,” said Lancaster. “It’s a big reason I’m still here,” echoed Dyer. They both said it was the rallying together and the will to fight that defined them, not the bomb’s blast.

Electa Wright, who was a “one-striper Airman” when the Khobar Towers attack happened, is now a retired senior master sergeant continuing to serve at AFMAO as a licensed mortuary technician.

In 1996, her knowledge of the Khobar Towers was nil.

“I didn’t even know where it was,” she confessed, quickly acknowledging how intimate her understanding of the place soon became. In response to the attack, she served 14-hour days on orders as a much-needed Reservist at the old Port Mortuary. “It was my job to take the fallen members from station to station; to stay with them throughout the process.”

Wright said somewhere in the long and daunting days following the attack, when 19 fallen Servicemembers passed through the care of the old ‘Port Mort,’ she found a purpose in providing that final care to fellow service members.

Opening the pouch containing human remains days after and thousands of miles away from the attack, Wright recalled 20 years later how she was forever changed.

A service member killed by the blast while sleeping in his bed; another so burned by the intense heat that he appeared frozen in a position of running for his life. Wright said she could still recall the colors of their shirts, and she could tell the one member was sleeping because, “He was curled up in the fetal position and his eyes were closed.”

On the night of the attack, Security Forces Airmen spotted a suspicious truck from a rooftop. After witnessing the driver running away, they began alerting residents.

The carnage. The acts of heroism. The selflessness in the face of tragedy. The rallying of spirits. All permeated the base like the dust and debris.

Lancaster said everything, including the change of command, stopped because normalcy was needed most. Everyone focused on taking care of the wounded and the fallen — in getting them home — and nothing else mattered.

The remains were transported from Dhahran to Dover’s Port Mortuary. Airmen like Wright, the former one-striper, cleaned and dressed the remains, all to preserve their dignity and honor.

Back across thousands of miles of land and sea, it would be up to others to sift through debris, to ask questions like “Who?” and “Why?” Questions aimed at exposing all those responsible for the attack.

The first soluble steps at answering those questions would take 19 years.

In August 2015, a man suspected in the bombing was captured and identified as Ahmed al-Mughassil, the head of the military wing of Saudi Hezbollah, according to the U.S. State Department and the FBI. He is suspected of orchestrating the attack, which was the deadliest targeting of U.S. forces since the 1983 bombing of the U.S. Marines’ barracks in Beirut, when 241 American servicemen were killed.     He has yet to face trial.

To survivors, the lingering question of whether justice will ever be served for the 19 killed and the nearly 500 others injured was answered on the day of the attack. No. Not ever.

“There can never be justice for that,” said Lancaster, who received a Purple Heart for wounds inflicted that day by shards of imploding glass. “It was a defining time for me. I’ve never forgotten it.”

About the author: Capt. Andre Bowser, is an Air Force Public Affairs Officer for the Air Force Mortuary Affairs Operations at Dover Air Force Base.