Home / Guest Posts / A Veteran-comedian walks into the White House…

A Veteran-comedian walks into the White House… 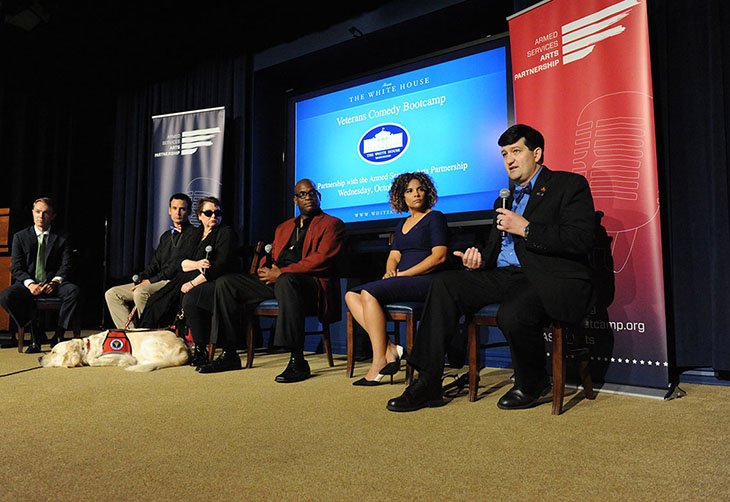 There I was. A woman with three traumatic brain injuries, standing on stage with a mic in my right hand, my service dog to my left, and about to perform stand-up comedy at The White House.

How did I get here?

In March 2016, I enrolled in Comedy Bootcamp a stand-up comedy class for Veterans and military families. When I told my 22-year-old son about the program, he assured me that I was not at all funny. That’s when I knew I had to do it, if only to prove him wrong. But I also participated in the course because my VA cognitive rehabilitation specialist wanted to show me that living with TBI didn’t have to mean social isolation.

Well it turns out, she was absolutely right. Fast forward six months and I’m still doing stand-up and taking the stage on a weekly basis with many of the fellow Veterans who graduated from Comedy Bootcamp with me.

Of course, it wasn’t all smooth sailing. After the first class, I seriously considered quitting. It was so much more difficult than I had realized. I didn’t know that comedians wrote and memorized their material! I thought you just told funny stories from your life. However, the atmosphere in Comedy Bootcamp – from the support of my instructor to the encouragement of my fellow classmates – helped me power through.

Comedy Bootcamp taught me the basics of writing jokes, organizing my material, and performing on stage. That way, by the time I started crafting jokes and performing, I had a baseline understanding of stand-up comedy. The round table workshop  – where my instructor and classmates offered me constructive feedback on my set – allowed this individualistic art form to feel a lot more like a team sport. Though I had the typical jitters before my graduation show, making a room full of 250 people laugh was one of the most empowering experiences of my life.

I would have never found this new creative outlet and comedy community if it were not for the Armed Services Arts Partnership (ASAP), which offers the Comedy Bootcamp program. They are a non-profit organization with the unique mission of empowering Veterans, Servicemembers and military family members to find a voice and thrive in their communities through arts classes, workshops, and performances.

What I love about ASAP is that they are not focused on what is “wrong” with you. They want you to express yourself, derive purpose through creativity, and build bonds with fellow vets. They give you a platform to tell your story to the local community, which I have found to often facilitate an honest, accessible, and non-stigmatized dialogue about my experiences as a Veteran.

While I thought that ASAP’s approach of teaching comedy to Veterans was a neat idea, I have learned that it is based on a strong body academic research. From a psychological and sociological perspective, humor has been found to promote resiliency following traumatic situations; reduce stress, anxiety and depression; and help people transition into societies that are culturally different than their own.

Historically, humor and comedy have been powerful tools for social critique. This has been exemplified through the Ancient Greek satyr plays, the abolitionist witticisms of Mark Twain, and the biting political commentary of people like Jon Stewart. Whether it be easing the stresses of the military transition or providing Veterans with a voice back home, comedy clearly has a valuable role to play in the reintegration process.

Personally, Comedy Bootcamp has taught me that traumatic brain injury is not a life sentence. It does not have to mean that I cannot learn new things. It does not have to hinder me from making new friends. And it certainly will not prevent me from having new experiences.

Which leads me back to The White House stage. I would like to say that I was taking in the moment when I paused for a few seconds before beginning my opening bit. Really, I was just nervous. But then I told my first joke. It hit. And then the next one hit. Before I knew it, I was delivering line-after-line as if I did not have three TBIs.

All of the sudden, about halfway through my set, my mind went blank. This was the first time I ever blanked during a live show. I could have panicked, but I did not. Instead, I calmly asked the audience “where was I?” and in a moment of pure comedic mercy, someone in the crowd lent a helping hand, yelling “You just fell off a cliff!” From there, I was off to the races, finishing the story of my second TBI (falling off a cliff) and concluding with a bit on my final TBI adventure.

Performing at The White House is an experience I’ll never forget. Well maybe I will, but my Veteran comedy community will be sure to remind me!

About the Armed Services Arts Partnership

The Armed Services Arts Partnership (ASAP) is a 501(c)(3) non-profit that empowers Veterans, Servicemembers, and military family members to find a voice and thrive in their communities through arts classes and performances. ASAP focuses on promoting artistic expression, skill-development, and camaraderie through six- to twelve-week classes in stand-up comedy, improv, and creative writing. The organization then partners with local colleges, arts organizations, and performance venues to offer its graduates continuous opportunities for artistic and personal growth. In the process, ASAP provides participants with transferable life skills, a renewed sense of purpose and identity, and healing benefits, and leverages the arts to strengthen ties between Veterans and their communities.

About the author:  Maureen Normann is a Veteran of the Women’s Army Corps and the U.S. Army. She receives her medical care at the Washington DC VA Medical Center as part of the Polytrauma System of Care. She loves therapeutic riding with Chrissy the Wonder Horse and her best friend, #ServiceDogPrince.  Photos in this article are by Lloyd Wolf.