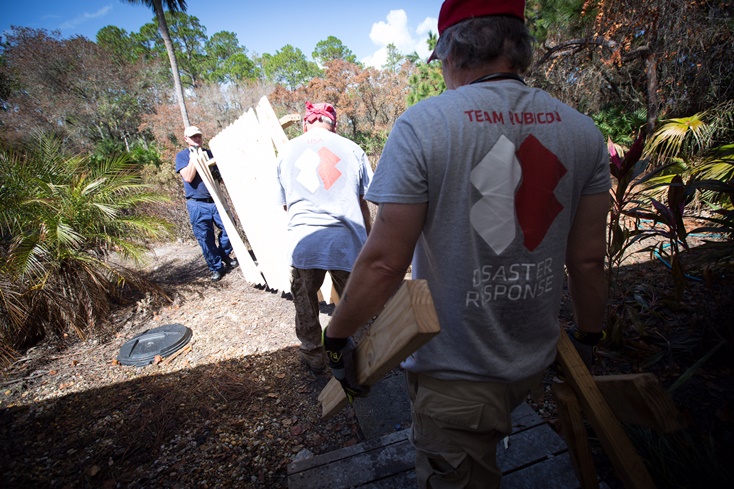 The volunteer Veterans and responders of Team Rubicon are spread out along the Southeastern coast shoveling muck, clearing debris, and providing a much-needed source of relief for residents impacted by Hurricane Matthew that battered coastal cities like Savannah, Georgia and St. Augustine, Florida and flooded inland areas as the storm rode up the coast.

Matthew made official U.S. landfall in South Carolina on Oct. 8. Team Rubicon coordinated with local partners and emergency management agencies while reconnaissance teams were sent in to assess the damage from Florida to Virginia.

Army Veteran Bob “Doc” Pries deployed to South Carolina and reflected upon his first days serving others in the wake of severe flooding: “I’m reminded, the things you do for yourself are gone when you’re gone. The things you do for others remain; they’re your legacy. I’m thrilled to be part of Team Rubicon and excited to continue to build a legacy of serving others.”

Floodwaters have been the most damaging agent of this storm. Greyshirts, as they are more commonly known among Team Rubicon’s growing community, have taken on utilizing their individual chainsaw training, heavy equipment capabilities and rigorous muck-out experience. In total, more than 150 members deployed with more en route to North Carolina.

Florida native Amy Blowers survived Matthew’s wrath, but she was more concerned for family and neighbors in the community. Operation Loggerhead was her first deployment with the team. Amy was strike team leader in charge of clearing out a severely damaged property belonging to an 80-year-old resident. She described the empathy her team felt for this elderly man who had no insurance and no options.

“He was completely overwhelmed by the storm,” she said. They toiled, gutted bathrooms, replaced walls, and listen to his jokes for three and a half days. “It was hot, dirty, smelly, nasty and the most rewarding work I have ever done,” Amy said. “Watching his face change from the first moment we met to the day we finished up was a priceless payment.”

As a new member on her first deployment, Amy had a hard-to-place anxiety about volunteering because she was not a Veteran but discovered none of that matters in Team Rubicon, and she was welcomed like anyone else. She described how fellow members refer to themselves as a TRibe, as a family, and said “It isn’t just a cute slogan; they really do mean it.”

About the author:  This article was submitted to Vantage Point by Patrick O’Neill of Team Rubicon.