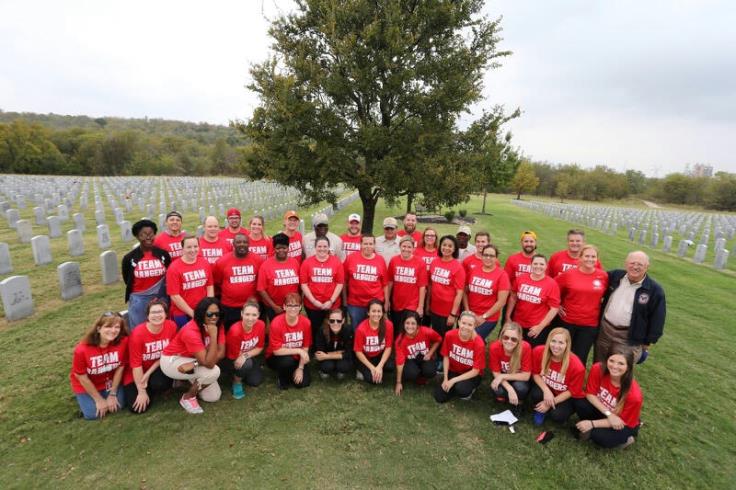 For the second year in a row dozens of staff members of the Texas Rangers baseball club came to the Dallas – Fort Worth National Cemetery to help spruce up the 638-acre cemetery for its Veterans Day program, Nov. 11.

These volunteers hope to make this annual tradition to show their community support.  Some were at the cemetery for the first time last year and this year encouraged their fellow employees to join in the effort.

The group, led by Karin Morris, vice president for community outreach and executive director of the Texas Rangers Baseball Foundation, spent an entire afternoon cleaning headstone and markers and doing some landscaping around the trees.

“Our baseball team has developed an important relationship with the Veteran community,” said Morris.  “While many of our fans see our players as heroes, the real heroes are here in this cemetery,” she said.

“I really appreciate the work these volunteers do,” said cemetery foreman Melvin Carson.  “This is hard work and we welcome their help.”

For a number of the volunteers, the day was extra meaningful as they have family members and friends buried in the 16-year-old cemetery.  A few of them later visited the gravesite of slain Dallas police officer Patrick Zamarripa, a Navy Veteran, who was a big Texas Rangers fan.

“It can get very emotional,” said one who paused as Taps was being played nearby.  Others unexpectedly jumped as the sound of rifle follies could be heard.

“We thank the staff members of the Texas Rangers for their community service,” said Deb-B Kamisato, the cemetery’s administrative officer.  “We admire how quickly and efficiently they worked.  They seemed to be happy being here and we were equally excited to have them here.”

Said one of them said, “it’s the least we can do that thank those who have preserved our freedom.”