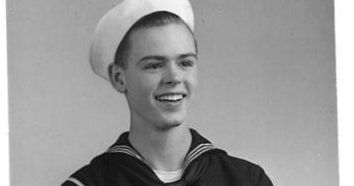 In this Veteran Spotlight, NCA intern, Maari Weiss, offers the story and Veteran’s legacy of George DeLong. Mr. DeLong was serving on the USS Oklahoma at Pearl Harbor when the Japanese attacked on that Sunday morning in 1941. He shared his story of that day and the rest of his service in World War II with the Veterans History Project of the Library of Congress. We always enjoy Maari’s research and work to bring Veteran’s stories from those archives to the Veterans Legacy Program.

DeLong’s vivid recollection offers an insight into that infamous day, and his is not alone. He persevered in service after December 7, 1941, and served in a variety of ways. His service in the Navy influenced the rest of his life.

Up until he decided to enlist in the United States Navy to “see the world” in January 1941, George Albert DeLong had lived in Annville, Pennsylvania. He had graduated high school less than a year before that. He was born and raised in Annville, and he had a job in a local factory. When he started out in the Navy, he had no idea that, within the first year, he would survive one of the worst attacks the United States has ever faced.

DeLong went to Quartermaster school in California after his recruit training and afterward he was assigned to the USS Oklahoma, a battleship in the Pacific Fleet. The ship was stationed in Pearl Harbor and, when the Japanese attacked on December 7, 1941, he was trapped on board, along with seven other men. In describing his experience on that fateful day, DeLong remembered that “[t]here was a moment of panic when we first realized we were trapped…we looked at each other in stunned silence.” They did not know what had happened yet, but they all decided together to stay where they were rather than risk getting stuck trying to move. Luckily, none of them were seriously injured. The group tried to shift to a higher position and “started fighting off the incoming water.” Then, everything tipped over and all of the enormous machinery – “TONS of machinery” – that they had thought was secure fell. Water came in through the air vents into the small area where they were waiting for help, and they used a rolled up mattress to stop it, after first trying to use clothes and blankets. DeLong recalled that they “didn’t dare go near the water.” Their flashlight wasn’t working properly, especially by the end, which left them in the dark. Then, someone made a joke, which really helped all of their morale, “set[ting] a tone that kept everybody on an even keel.”

As they waited to be rescued, DeLong remembered that “[t]here was just a little pin-point of light up there which was our first indication they were out there – just a little nail-hole or something. …When we saw it, we KNEW they were out there; before this it had SOUNDED as if they were there a dozen times; but this was the first time that we actually knew.” The rescuers cut a small hole to get them out because “[t]hey were afraid they were going to burn the oil in the sides there.” When everything was ready, the rescuers “reached down under our armpits and pulled us up one at a time and handed us up to the guy on the next perch.”

The whole time that this group of eight men was trapped, they “had no idea of time.” Later, they discovered that they had been there for about 32 hours. As soon as they were rescued, they went to the USS Solace for medical attention, “and met the Captain on the quarterdeck. He came over and said, ‘Get the brandy!’” Everyone in the group was exhausted from their ordeal, but, before they went to sleep, they were fed and informed of the attack. When DeLong discussed this experience, he recalled that, while he was trapped, his first thoughts were about his mom. Rather than being angry or upset about the situation for his own sake, he was worried about how much pain it would cause for his mother. He tried to minimize the significance of this selflessness by attributing it to his young age and the fact that “at that time [he] was without ties and responsibilities,” but this just shows that he was modest in addition to being extremely empathetic. He also expressed gratitude to everyone who “participated in the rescue.”

DeLong’s time in the Armed Forces did not end with Pearl Harbor. He was reassigned to the USS Helena, which took part in several battles of World War II as part of the Pacific Fleet. One of the campaigns that he could most vividly recall was the Battle of Guadalcanal, on November 13, 1942. Unlike at Pearl Harbor, during this battle, he was able “to observe the action taking place outside.” He saw the USS Helena fire at a ship whose searchlight was trained directly on it and he saw “star shells in the sky.” As the battle continued, he “thought [he] felt little pieces of debris bounce off [his] life jacket.” It wasn’t until later that he realized that those “little pieces of debris” were the result of a shell base hitting the engine order telegraph that was right next to him.

Once the battle had ended, the USS Helena and four other ships “head[ed] back to Espiritu Santo.” Delong was at the ship’s helm when “Lt. Cdr. Carpenter, the ship’s navigator,” began issuing urgent orders. He dutifully followed his orders and, soon, “an immense explosion took place.” Since he had to stay at his post, he did not know what had happened. He later learned that a torpedo had hit the USS Juneau. Several years after this event, DeLong saw “Lt. Cdr. Carpenter (by that time Admiral Carpenter) at a Helena reunion,” and he learned that “in the early part of his career, [Admiral Carpenter] had taken special training on spotting and tracing torpedo wakes… As a result of his early training, he was the first one to see the wakes of the two torpedoes coming from the port side.” Unfortunately, they “were not able to warn the Juneau in time to save her.”

Although DeLong was given orders to go back to the United States so that he could attend the U.S. Naval Academy, his ability to transfer was hampered by wartime delays, and he turned 21 before he could make it to the Naval Academy. Since the Naval Academy requires its entering students to be under the age of 21, he could not attend. Instead, he worked as a teacher at the San Diego Naval Base before being assigned to a cargo ship and working in the Pacific until the end of the war.

On January 6, 1947, DeLong was discharged from the Navy. He returned to Annville, Pennsylvania, and used the GI Bill to study English and Political Science at Lebanon Valley College (LVC). He married fellow LVC student Jeanne Stine on August 5, 1950, before the beginning of their senior year of college. DeLong was active in his community, even running for a state senate seat in 1966. He lost the race and worked in the private sector until 1971, when he became Pennsylvania’s Deputy Secretary of Labor and Industry. After the political winds changed in Pennsylvania, he got a position with the U.S. Department of Defense, which he kept until his retirement in 1987.

As a retiree, DeLong went to Navy reunions and booked speaking engagements in which he discussed his recollections of the events of Pearl Harbor. His story has been published in books and in National Geographic magazine. In 1991 and 1992, DeLong travelled to Hawaii, the Philippines, Australia, and Guadalcanal to attend ceremonies honoring the 50th anniversary of World War II events that occurred in those places.

George Albert DeLong died on March 22, 2002, and was laid to rest in Indiantown Gap National Cemetery, in Annville, Pennsylvania. He left behind his wife of over fifty years, two daughters, a son, and four grandchildren. We honor his service.