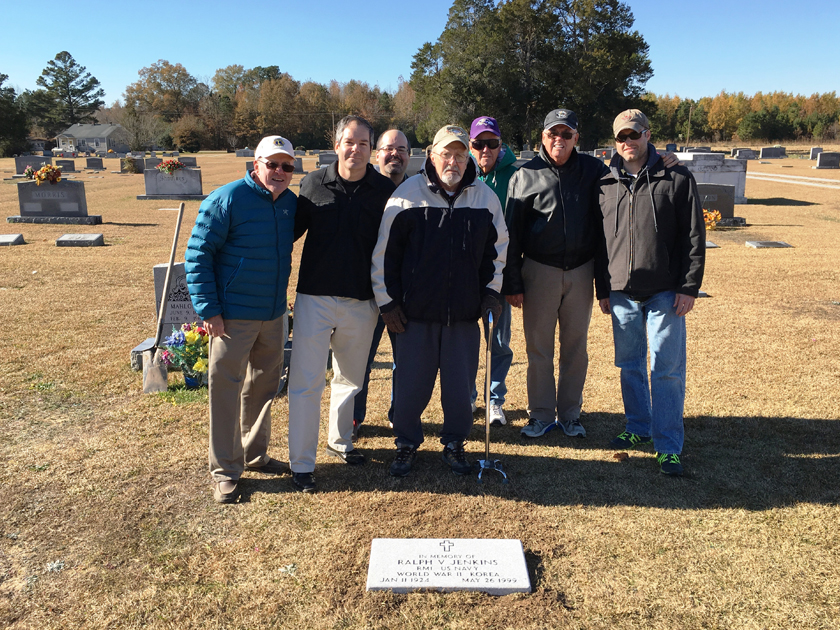 On Monday, November 21, I gathered my family at Cedar Lawn Cemetery in Rich Square, North Carolina, to honor my grandfather, Ralph V. Jenkins, with a VA memorial marker. When he passed away, we scattered his ashes, but we never procured the traditional VA headstone or marker as we had no remains to bury. Because I work for VA, I knew we could secure a memorial marker but, as is often the case with our hectic lifestyles, I kept putting it off. Interestingly enough, most people I have spoken with had no idea you could procure a memorial marker for a loved one (assuming VA hadn’t furnished a VA headstone before).

My grandfather and U.S. Navy Veteran Ralph V. Jenkins served in combat during WWII and the Korean War. Our family honored him with a VA memorial marker placed in Rich Square, N.C., Nov. 21.

With my father and uncle’s blessing, I submitted the VA Form 40-1330 to a funeral home in Rich Square to assist with the process. One of the funeral directors personally installed the marker while we observed. He was so moved by the whole experience that he planned on including some information regarding the event with the photo on his business’ webpage and his personal Facebook page.

Coordinating with my family scattered all around the country, we met at the cemetery to unveil the stone and observe the installation. Grandfather’s marker was placed next to his parents and brother in the family plot. He was born and raised in Rich Square, but was living in Myrtle Beach, S.C. when he passed away. I was especially close to my grandfather growing up and I know how especially proud he was of his service in the Navy.

He served aboard the USS Knox (APA-46) as a radioman during WWII in the Pacific during the island hopping campaigns (Saipan, Philippine Sea, Leyte, and Iwo Jima). His ship was responsible for ferrying troops ashore during the landings. I remember the stories he would tell when I was young about service aboard the ship in combat during WWII, about witnessing first-hand large-scale naval battles, kamikaze attacks and thousands of casualties. He said going ashore to gather casualties during Iwo Jima was especially emotional.

My grandfather re-enlisted in the Navy during the Korean War, and he passed away in 1999. Honoring him with a VA memorial marker has meant a lot to my family, and I can’t thank VA enough.

About the author: Scott Jenkins is a Rating Quality Review Specialist at the Veterans Benefit Administration’s Philadelphia regional office.