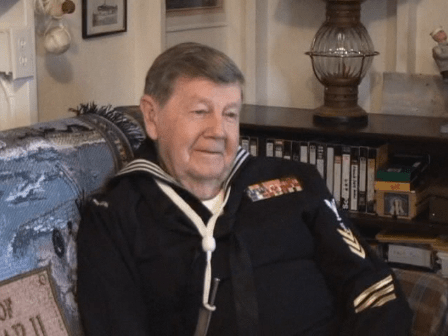 In this Veteran Spotlight, NCA intern Maari Weiss tells the story of Paul Weiser, a Navy Veteran who served in World War II. Actually he served for more than that: he enlisted before, and his contract was not up until after the war. He served his full six and one-half years with the Navy honorably. Maari will share Mr. Weiser’s Navy career in battleships, at some of the toughest battles in the Pacific theater of that war.

She is able to share Wieser’s story of service because he was interviewed for the Veterans History Project at the Library of Congress. Recently, I was at a Veteran event in South Dakota where the issue was raised about recording Veterans’ experiences from World War II before it is too late (approximately 3,000 Veterans of World War II are passing away each day; the youngest known World War II Veteran is 89). I was surprised how few had heard of this resource at the library of Congress.

Anyone who knows a Veteran (of any era) who would like to be interviewed can go to the website of the Veterans History Project and find information on how to conduct the interview and submit it to the Library of Congress, where it will become part of their collection.

Please enjoy Maari’s research on Paul Wieser. His interviews are kept at the Veterans History Project at the Library of Congress. Find the links to them in the story below.

Like many other men and women of his generation, Paul A. Wieser volunteered to serve his country at a young age. In two separate oral history interviews available online as part of the Library of Congress’s Veterans History Project (video interview), Wieser shared his experiences as a member of the United States Navy, focusing on his memories of World War II.

Wieser was born and raised in Linden, New Jersey. His parents were immigrants who came to this country from Austria, and he “had six brothers and two sisters.” He described his parents as “hardworking people” who instilled in their children a “love of the country very early. [His] parents were very proud of the United States.”

After graduating from high school, Wieser found that “work was hard to get.” He also recalled that “as a youngster, … [he] thought the greatest thing in the world was to be a soldier.” Although he had participated in an Army program as a high school student and found that Army life was not for him, Wieser determined that his earlier experience did not rule out all military service. He therefore “decided to join the Navy,” formally enlisting on “February the 14th, 1941.” In choosing to become a sailor, Wieser was required to commit to “six years” of service, and, for most of that time, the United States was at war.

Wieser went through recruit training in Newport, Rhode Island, before being “assigned to the new battleship, North Carolina.” On the ship, he “was put in the deck force…[and] assigned to … Mount 7 and a Left Gun. [He] was the powder man … the guy that put the powder charge in the tray” to fire projectiles. When the Japanese attacked Pearl Harbor on Sunday, Dec. 7, 1941, men who had been on leave came back early, and Wieser, who had been on duty, learned the news from them. After the United States declared war, the USS North Carolina was sent “down to the Gulf of Mexico … [to] train for 40 days.” Then, they were ordered to Maine, where they practiced and patrolled the area for German battleships. After a little while, the Navy told the North Carolina to go to the Pacific, and it “just about fit through” the Panama Canal en route to San Francisco. They continued to practice before being sent to Pearl Harbor in June 1942.

Wieser was saddened by the destruction that was still evident there, but the North Carolina was soon on the move again, this time headed to fight in the Pacific Theater of World War II.

As a fast battleship, the North Carolina was tasked with protecting carriers from air attacks, and it was “the only battleship there at the time of, uh, Guadalcanal.” On Aug. 24, 1942, the North Carolina “got baptized in fire,” firing at enemy planes for the first time after being attacked by the Japanese. Wieser praised his shipmates, saying “We had a good crew. …They were … really good.” After this event, the ship continued to patrol the waters, “operating with the aircraft carrier Hornet.”

On Sept. 15, 1942, a Japanese I-19 “saw the Wasp [another aircraft carrier], and … fired six torpedoes at him.” Unfortunately, the Wasp sunk when three of the torpedoes hit it. Even though the North Carolina was “miles away,” one of the torpedoes that had missed the Wasp “came all the way over and hit [the North Carolina]. … It blew a, uh, 35-foot hole.” Luckily, “the ship is compartmentized [sic] off,” which prevented it from sinking. Growing up, Wieser’s father was very strict about proper treatment of the United States flag, which Wieser later credited with helping him get “a good job” as crane operator on the USS North Carolina. As a crane operator, Wieser “was kinda [his] own boss,” and, when the torpedo hit, he had snuck away from the crane because he heard that they were selling ice cream elsewhere on the ship. The whole ship shook when the torpedo hit, so he was lucky that he wasn’t up on the crane, but, after the hit, he had to hustle to get back to his battle station before the doors on the ship closed and he got in trouble for not being where he was supposed to be.

During its time in the Pacific Theater, the North Carolina island-hopped and was involved in events in Guadalcanal, the Eastern Solomons, Tarawa, Palau, Iwo Jima, and Okinawa, among others. When the war ended, Wieser “still had a year and a half to go” on his enlistment, and he continued to work on the North Carolina until he was discharged in “Brooklyn, where [he] went aboard it.” He had survived the war and come full circle on that one ship. The North Carolina “never went to sea again,” and, since Wieser ended up living less than ten miles away from where the ship was kept, he frequently took Sunday drives out to see it.

After being discharged from the Navy, Wieser “worked on the dock for a short while” and then decided to join one of his brothers on the fire department of his town. He also enlisted in the Naval Reserve. Due to the United States’ involvement in the Korean War, Wieser was called into duty, serving aboard the USS Kula Gulf.

While the USS North Carolina was deployed to the Pacific during World War II, Wieser spent his “spare time… [doing] a lot of writing.” He and his future wife grew up next door to each other, and they kept in touch by sending each other letters, even deciding to get married through this long-distance correspondence.

Jean and Paul Wieser on their wedding day

In total, Wieser “wrote 600 letters to her.” Wieser’s wife saved the letters that she received from him, and, more than a decade after the war ended, when the state of North Carolina bought the USS North Carolina and turned it into a memorial museum, Wieser’s letters became a part of that museum. Wieser himself maintained a relationship with the North Carolina, as he later moved down to North Carolina and “spent 10 years giving tours” aboard his old ship.

Paul A. Wieser passed away on Dec. 12, 2006 and was laid to rest in Culpeper National Cemetery. We honor his service.