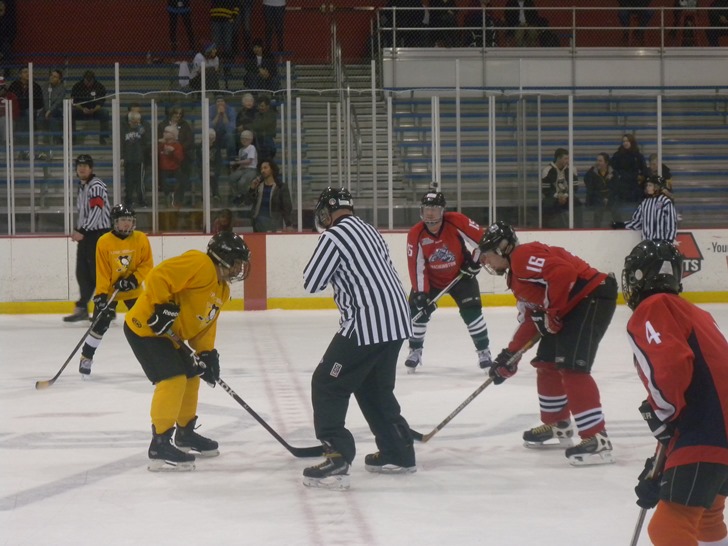 For a handful of blinded Veterans and 33 additional visually impaired athletes, the Super Bowl weekend in the Washington, D.C., area played second fiddle to the three days of training, competition and camaraderie during the First Annual Blind Hockey Weekend sponsored by the Blinded Veterans Association (BVA).

The unique weekend event, part of a wider initiative unveiled by BVA in early November, was made possible through a grant awarded to the Association by VA’s Office of National Veterans Sports Programs and Special Events.

“This has been one of the most exciting experiences of my life,” said program director Bruce Porter at the awards and recognition banquet as he began presenting certificates to each participant. “It is an honor and inspiration to associate with all of you and to serve as a witness to your courage, ambition, and determination.”

The purpose and focus of BVA’s program and the VA grant is to provide enjoyment and recreational rehabilitation opportunities to Veterans who may have never before tried the sport or even donned a pair of ice skates.

“Despite all of my recent sports activities, including all I did at last year’s VA Winter Sports Clinic, I definitely exercised muscles and part of my body today that haven’t been used in a while,” said BVA member Michaun Harrison, who traveled to the area from Fredericksburg, Virginia, with fellow BVA Mid-Atlantic Regional Group member and Richmond area resident Doris Jones. “It was fun to put on some ice skates and give this a try.”

Sunday, participants then woke up to an early 7:20 a.m. dedicated practice at the Iceplex Sunday morning followed by additional opportunities to tour the area and skate.

The larger VA-supported BVA blind hockey program continues to seek interested athletes in the Washington, D.C., by hosting weekly “Try It” sessions at the Kettler facility within the Ballston Commons Mall. Despite never before having put on ice skates or participated in an organized sport, OEF-OIF blinded Veteran Jackes Belony found out about blind hockey during a “Try It” session, then began attending them with the encouragement of his wife.

“She told me that I needed to go give it a try and that maybe I’d surprise myself,” he said. “The instruction I’ve received from Bruce and the other coaches has been just amazing, and now I feel totally comfortable on the ice.”

The “Try It” takes players who have never skated before and introduces them to the basics of skating, equips them with gear, and safely trains them to go as far as they wish to go in hockey, which is considered the only adaptive winter team sport.

Although the rules for blind hockey are similar to the sighted game, an enlarged, slower moving puck with loud ball bearings is used. In tournament play, all athletes must be at least legally blind with the lowest vision athletes playing defense or goalie. Athletes are grouped by sight level and can have only a set amount of sight among all of the players on the ice at the same time.

Blind hockey also requires goals to be scored in the bottom three feet of the net as it is unfair to the goalie to score in the top portion. The adapted puck does not make noise in the air. Teams must complete one pass prior to being able to score in the attacking half of the rink. This provides both the low-vision defense and the goalie an extra opportunity to track the puck.

Because hockey is considered the fastest, most aggressive game in the world, those who take up the sport usually develop increased mobility and balance almost immediately, Porter said.

“BVA is involved to help our blinded Veterans and to help blind associations introduce the sport to their athletes with the hope that blind hockey will be added to sports programs for the blind and visually impaired,” he added. “My role is to organize the ‘Try It’ sessions and coordinate ice time, coaching, media, and equipment.”

For an introduction to the excitement of the blind ice hockey and the enthusiasm of those who play the sport, watch this video of Courage Canada’s Blind Hockey Tournament.

The Blinded Veterans Association, founded in 1945 at the conclusion of World War II and chartered by the U.S. Congress in 1958, is the only Veterans service organization exclusively dedicated to serving America’s blind and visually impaired Veterans.

VA expects to issue a Notice of Funding Availability for Fiscal Year 2017 adaptive sport grants later this month.  Applicants will have 60 days to apply.  For details, visit visit VA’s website..

Stuart Nelson has managed the full spectrum of communications and public relations efforts of the Blinded Veterans Association since 2000. At the heart of the organization’s internal and external communications in promoting the welfare of blinded veterans is its bimonthly publication, the BVA Bulletin, for which he serves as the editor and chief contributor. Mr. Nelson earned a Bachelor of Arts Degree in Journalism and a Master of Public Administration from Brigham Young University.