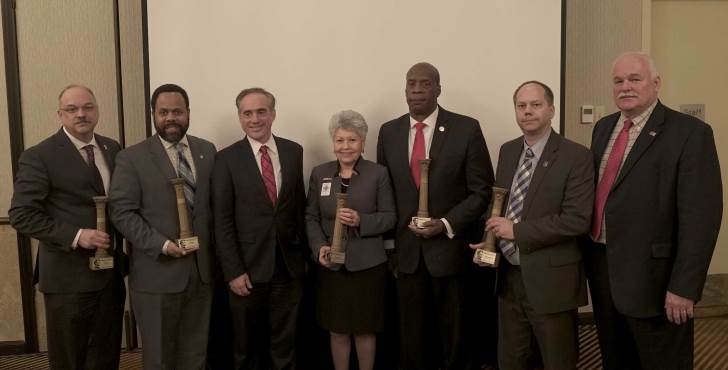 VA Secretary David Shulkin attended the National Association of State Directors of Veterans Affairs (NASDVA) Mid-Winter Conference in Alexandria, Virginia, last month to outline his top-10 priorities, reaffirm VA’s commitment to working with the states through a memorandum of agreement, and to announce the recipients of this year’s Pillars of Excellence Awards.

State Veterans affairs agencies are second only to the VA in providing benefits and services to Veterans and their families.  These state departments, while independent of VA, are key partners in the mission to fulfill the promise of Abraham Lincoln: to care for those “who shall have borne the battle.”

State agencies primarily assist Veterans with accessing and applying for federal VA care and benefits.  In addition to connecting Veterans to federal resources, each state government offers additional benefits or services to their Veterans.  From reduced or exempted state taxes, to education benefits and direct bonuses for war time Veterans, these programs represent significant investments and expenditures on behalf of state governments.

With VA’s national commitment to Veterans and the states local capabilities, the signed memorandum of agreement accurately reflects the close working relationship between the VA and the state directors.  This year, Secretary Shulkin presented five states with the Abraham Lincoln Pillars of Excellence Awards for outstanding state programs that support Veterans within their states.

In 2013, Alabama ranked third-highest in the nation in number of persons deployed to support the Global War on Terrorism. The Alabama Department of Veterans Affairs, in partnership with the Alabama Department of Mental Health, envisioned a community-centric solution to the problems faced by more than 400,000 Alabama service members, Veterans and their families. With the support of Governor Bentley, their vision would bring together 17 state agencies, numerous service-based organizations, private businesses, and the community, to create the Alabama Veterans Network (AlaVetNet).   In the three years since its inception, AlaVetNet has worked with numerous government agencies to create more than 120 pieces of legislation, and had more than 25 bills signed into Alabama law that better supports and protects Alabama’s military and veteran community.  By working with AlaVetNet’s partners, more than 40 Veterans have avoided prison and put their lives back on track; 39 hands-on events have directly addressed the needs of the SMVF community; and the Veteran unemployment rate has dropped from 7.9 percent in 2014, to 3.1 percent in 2016.

The Alaska Department of Military and Veterans Affairs developed an innovative way to accurately identify Veterans in their state for effective outreach.  Modeling a software program from another state, the Alaska Office of Veterans Affairs (AOVA) created their version of the Veterans Information System (VIS), at a cost of 1/10th the of the initial program. The Alaska VIS is a new, low-cost, innovative database that was designed to locate, account for and provide effective outreach to all Veterans.  An MOA with the Alaska Department of Revenue and the Department of Motor Vehicles gives AOVA the ability to pull Veteran data and incorporate into the Alaska VIS.  Alaska VIS went live in May 2016. More than 800 postcards were sent to rural communities using the new data, with a return of only three incorrect addresses. The number of Veterans attending outreach events has increased 110 percent.

In a highly rural state such as North Dakota, the funding for a “brick and mortar” Veterans Treatment Court would be difficult. A physical building with staff is expensive and a need would have to be shown as well as showing positive results from having such an entity.  However, a chance to get treatment rather than a jail sentence was needed.  Using current North Dakota laws and resources, the commissioner of North Dakota Department of Veterans Affairs worked with the North Dakota Supreme Court to establish a “Virtual Veterans Court.” A workable plan was developed and approved. All jails, booking centers, detention centers and clerk of courts have a “military service” on their intake forms along with follow up questions which may indicate that Veterans Court option may be available. As existing resources are being utilized, no appropriations are needed for this program, and have saved the state and counties money in the end since federal resources are used to treat the Veterans and incarceration costs are decreased.

In 2010, the Washington State Department of Veterans Affairs (WVDA), with authorization from the state legislature, began developing a consortium of public-private partners. Since then, the relationships built have helped improve access to services. In 2011, WDVA established a unique public-private partnership with the WestCare Foundation, with the primary purpose of developing programs for Veterans and their families at the Washington Soldiers Home. This partnership has also allowed for the creation of a veterans service clinic, the VA Rural Veterans Coordination Pilot, re-entry support for incarcerated Veterans at correctional facilities and the ability to renovate and provide permanent supportive housing for homeless women Veterans.  In the spring of 2012, WDVA partnered with the Brigadoon Service Dogs and opened a Therapeutic Service Dog Training and Care Center at the Orting Soldiers Home Campus. VetBikes, a non-profit 501c3  has also partnered with the WDVA to provide restored bicycles at no cost to Veterans, to facilitate their path to wellness.

Edward A. “Ted” Diaz served for 20 years in the United States Navy as a Hospital Corpsman serving both forces afloat and with the United States Marine Corps.  After retirement, Ted parlayed his skills and experience to the United States Army Medical Command as an Ombudsman for the Walter Reed Army Medical Center and Ft. Belvoir Community Hospital. He has served with the Department of Veterans Affairs since November 2011, and currently serves in the Office of Public and Intergovernmental Affairs (OPIA) as a management and program analyst. Ted was born and raised in Huntington, West Virginia, and is a graduate of Marshall University.  He currently resides in Northern Virginia with his wife Julia, their son Ryan, and daughter Sara.