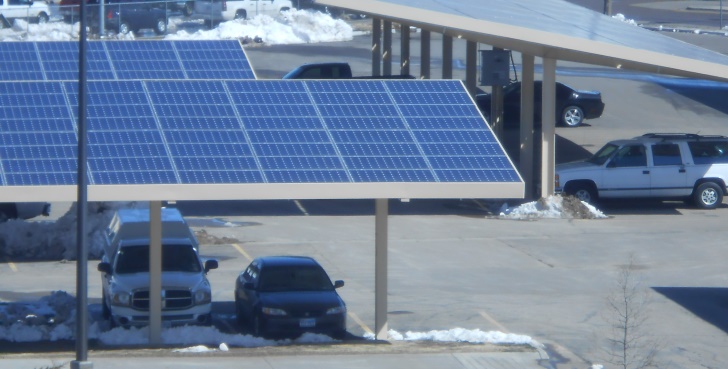 Amarillo VA Medical Center became the first VA medical center to combine solar power and thermal storage technologies to generate energy and export excess energy. And because of their innovation and forward thinking, Amarillo VA was recently recognized by the Texas Commission on Environmental Quality as a leader and winner in pollution prevention.

Samuel Hagins, energy manager at the Amarillo VA, is referred to as the brain behind all things environmental at Amarillo VA.

“First, we constructed an ice thermal storage system designed to shift the medical center’s air conditioning peak load from daytime to nighttime,” said Hagins. “The center produces up to 32,000 gallons of ice slush each night, which it uses during the day to cool the medical center. The thermal storage system helps reduce our power bill. However, we did not want to stop there!”

Hagins states that teaming these two technologies together has allowed the facility to produce approximately 3.5 million kilowatt-hours annually, over one-third of the center’s total energy consumption. When the thermal storage system runs in tandem with the PV system, the center can defer daytime air conditioning, which fulfills the mission’s objective of net-zero energy consumption during peak sunlight.

“The diminishing air conditioning load allows the facility to export between 30,000 and 100,000 kilowatt-hours back to the utility company each month, which is credited to our bill,” said Hagins. The Amarillo VA also received a renewable energy rebate from the local utility provider for more than $400,000. The PV energy generation alone saves the facility approximately $245,000 on their electric bill each year.

Hagins is no stranger to recognition for his facility’s environmental efforts. In 2014, Hagins, along with other Amarillo VA staff, received a Federal Energy and Water Management Award, for their efforts in energy savings via their covered parking project.

Amarillo VA director Michael Kiefer credits Hagins and his team for the innovation and brain power to help make this happen.

“Being included as one of nine companies recognized within the public and private sector for their environmental awareness and programs is extremely rewarding,” said Kiefer. “It illustrates to me that all the forward and innovative thinking here in Amarillo is certainly worthwhile and attainable.”

Aside from these economic and environmental benefits, the project is also inspiring other VA centers to establish similar programs. PV-covered parking has been duplicated at more than 25 VA medical centers, and projects integrating both technologies have been adopted by three other VA facilities. This program is improving the environment of the great state of Texas, while also saving money on electricity, which can go a long way toward quality-of-life investments for those who have selflessly served our country.

The Texas Commission on Environmental Quality initiated the Texas Environmental Excellence Awards in 1993 under the Waste Reduction Policy Act of 1991. Presented every spring, the awards are given in up to 9 diverse categories across the public and private sectors. By honoring these winners, the commission hopes to encourage other citizens to initiate like-minded projects and reinforce a spirit of environmental stewardship.

Jessica B. Jacobsen is the director of the Dallas Regional Office of Public Affairs where she provides support and counsel to VA facility directors and public affairs officers within a seven-state southwestern region.