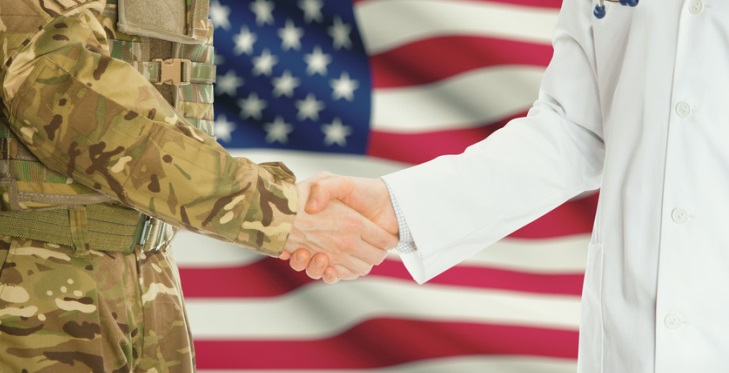 The idea behind the Veteran’s Choice Program is simple: Veterans deserve access to great care no matter where they live.

When Ken Rainey’s seasonal allergies suddenly became much more severe, he didn’t think much of it. Perhaps it was just a bad allergy season. That is, until he began to spit up blood. When he went in for a checkup with an ear, nose, and throat specialist, his worst fears were confirmed. He had a tumor in his throat.

Rainey was further devastated when his doctor told him that conventional radiation therapy would require the loss of 12 of his back teeth. The oral surgeon said the process would be disastrous to Rainey’s teeth and jaw, and he would be rendered unable to eat without a feeding tube. Rainey was understandably shocked.

“That floored me,” he said.

Rainey decided to choose another way to fight the tumor in his throat. This motivated him to search for any alternative cancer treatment that would not have such a lifelong impact on him. Eventually, he discovered the benefits of proton cancer treatment, an alternative to traditional radiation treatment.

What is proton cancer treatment?

Proton cancer treatment is a new type of non-invasive cancer treatment that is less damaging to the body than conventional radiation treatment. The basic idea behind the two treatments is the same: oncologists target the cancerous cells with radiation, which can help shrink or eliminate the tumor. But with traditional radiation treatment, that cancer-destroying radiation also harms the healthy tissues surrounding the tumor, often with devastating side effects. That’s why Rainey’s doctor warned him about losing his teeth.

However, proton cancer treatments can avoid this kind of collateral damage to the body. Proton treatments are performed with a single, high-energy beam of protons aimed precisely at the tumor cells. Proton therapy minimizes the damage to the surrounding healthy tissue. Thus, this non-invasive cancer treatment lowers the risk of the nasty side effects more commonly associated with radiation therapy, such as burns to the skin, fatigue, and loss of bodily functions like eating and chewing.

How the Veteran’s Choice Program helped

There’s been a lot of talk about the importance of choice and access in health care lately, usually the lack of it. While proton therapy seemed like the ideal solution, Rainey ran into another huge problem. Because he lives about an hour outside of Tupelo, Mississippi, he assumed he would have trouble accessing the health care provider of his choice. Going in for any cancer treatments would also require a lot of time driving to a proper facility, and like many rural Americans, Rainey is used to complicated insurance restrictions.

He needed proton cancer treatment, and he needed it right away. Cancer isn’t known for accommodating long waiting periods. Instead, Rainey was able to travel to Knoxville, Tennessee, to receive proton treatments and the program even funded his stay there.

Here’s why access and choice are so important to Veterans like Rainey: he opted for proton cancer treatments against his doctor’s advice. His doctor feared the treatment was too new to be sure if it could help, but Rainey was convinced it was the right choice for him.

In the end, the proton cancer treatment proved to be a complete success. Though he experienced a sore throat and loss of taste, Rainey was able to keep all of his teeth and did not require a feeding tube at all during the process. Rainey says he is immensely grateful for non-invasive cancer treatment option.

“I could’ve taken the other treatment, but from now on I would have had all those other things to deal with,” he said.

How do you know if you qualify for the Veteran’s Choice Program?

Veterans who meet certain criteria will also be eligible for the Veteran’s Choice program. You might be eligible if:

To find out more about the Veteran’s Choice Program, or to see if you are eligible, please visit: https://www.va.gov/opa/choiceact/.

Larisa Brass is a career journalist, freelance writer and 2014 graduate of Loma Linda University with a Master’s in Public Health. A devoted mother, she has worked as a volunteer in community health for many years. She is currently employed by Provision Healthcare in Knoxville, Tennessee.