Head First: How the GE/NFL head health initiative became a catalyst for technology and innovation for brain trauma 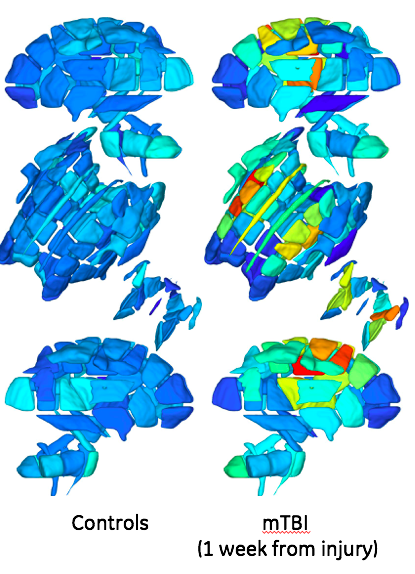 GE is proud to collaborate with the U.S. Department of Veterans Affairs on programs that support our nation’s Veterans and their families. Next month, for the second consecutive year, GE will support Brain Trust: Pathways to InnoVAtion in Boston.   We look forward to continuing the valuable discussions begun last year and delving further collaborative efforts relating to brain and mental health, including Traumatic Brian Injury.

The brain may be the human body’s center for knowledge, but we still have major gaps in understanding this organ’s complexity. Which is why GE and the NFL dedicated the last four years to clinical brain research, making critical advancements in the diagnosis, prognosis, and prevention of mild, moderate and severe Traumatic Brain Injury (TBI).(3)

TBIs have significant impact on the lives of Veterans, athletes, and their loved ones. Detection and characterization of the injury is critical to providing the best care, however, some injuries – especially mild TBIs, or concussions – are difficult to detect on traditional imaging equipment, and often go undiagnosed; 90 percent  of clinically diagnosed concussions, which often do not involve loss of consciousness, scan negatively on a neuro CT.(1) On top of that, concussion diagnosis relies on a subjective neurological exam that often uses inconsistent criteria and relies heavily on a patient’s self-reported symptoms.(2)

When GE teamed up with the NFL to launch Head Health Initiative in 2013, the organizations’ goal was to address these misdiagnoses by developing next-generation brain imaging technologies that take a whole-brain approach to improving the diagnosis and care of patients with mild traumatic brain injury. Here’s what we found:

The study: Head Health Initiative’s clinical research study tested broad, state-of-the-art MR imaging protocols and image analysis in the cloud on a population of TBI patients to understand the value of quantitative neuroimaging beyond conventional radiologic read of the scans.

The goals: To determine if there is a correlation between imaging data and symptoms. Such a link would offer the opportunity to develop more objective measures of symptom burden. To link observed longitudinal changes in imaging to TBI pathology on an individual subject basis and observe any evidence of the disease and recovery in brains for which structural imaging was normal.

Patients were enrolled within one week of injury, and followed longitudinally with repeat visits until three months from injury. At each visit, patients were imaged with MRI and underwent a neurological examination with a neurocognitive assessment component.

Rs-fMRI, for example, was found to correlate with symptom burden the most. Functional connectivity between brain networks known to be affected by TBI decreases with increasing symptoms, which is consistent with the picture of mTBI as a disconnection syndrome.

The GE Healthcare and GE Global Research team also developed a cloud-based analytics platform that enables researchers to process and analyze the massive amount of data being collected during the Head Health Initiative-funded research in a timely fashion. It is an important infrastructure advancement for processing big data and the successful implementation demonstrates the advantage of cloud-based analytics. GE Healthcare continues to invest in this technology with the GE Health Cloud, initially introduced at RSNA 2015.

The challenges: The heterogeneity of the disease is challenging. Depending on the impact location and severity, the different regions of the brain that can be injured, and the pathology and clinical manifestation can differ significantly among patients. Unlike neurodegenerative diseases that often display pathology signatures that affect common brain regions, the heterogeneity of pathology in mTBI poses a challenge for group studies.

It is that heterogeneity that needs to be understood. Advanced diffusion imaging acquisitions and individual-subject analysis methodologies may help researchers with this task.

Patient enrollment for the second phase of the study is at the halfway point, and we expect to complete enrollment of 350 patients and 175 controls by the end of 2017.

Development of new imaging tools and techniques could enable a more objective, definitive diagnosis and potentially provide clinicians with the knowledge to better determine an individual patient’s prognosis and guide care. It could also help answer the question that Veterans, soldiers, military leaders, athletes, neurologists, and primary care physicians all want to know: After a concussion, when is it safe to go back to play, to work, or to the battlefield?

Utilizing advanced technology was critical to the success of the clinical research studies under the Head Health Initiative. While other TBI studies may have found positive results for diffusion imaging primarily in subjects with structural imaging abnormalities, the enhanced protocol utilized in the GE Healthcare research study is enabling researchers to demonstrate sensitivity to subtler TBI pathology.

The work started by Head Health Initiative is just the tip of the iceberg: enhanced sequences, advanced post- processing, and cloud-based analytics are the foundation for researchers, scientists, and clinicians to continue unlocking the mysteries of the brain. The Head Health Initiative has enabled GE Healthcare to dial-up this infrastructure of sequences, protocols, and the pipeline for analysis not just for mTBI, but for other brain diseases, especially in the fields of neurodegenerative disease and neuropsychiatry.

‡The use of MR data as surrogate biomarkers for mTBI or other diseases remains as technology in development which represents ongoing research and development efforts of GE Healthcare in conjunction with other researchers and healthcare institutions.

Ajit Shankaranarayanan, Ph.D., is the head of Neuro MR at GE Healthcare.