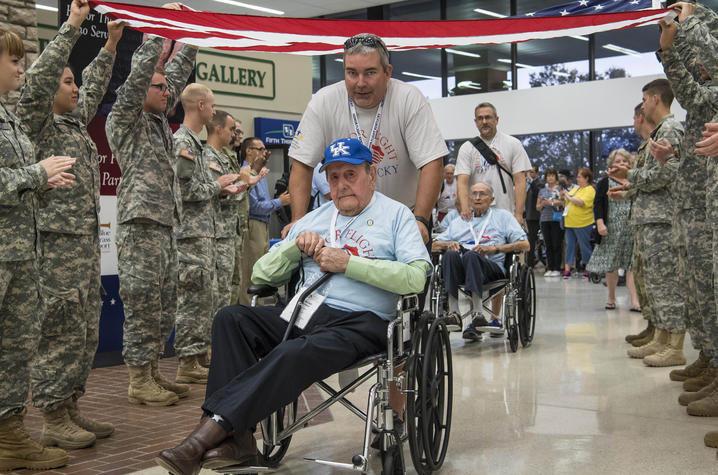 When Honor Flight Kentucky lands in the nation’s capital on Armed Forces Day this Saturday, the nearly 70 Veterans and their guardians will be part of a historic mission — the first Honor Flight sponsored solely by a university, the University of Kentucky (UK).

“For more than a decade, the Honor Flight program has transported more than 100,000 Veterans to Washington and this flight marks the first such opportunity for a university to show its gratitude to our Veterans for their service and sacrifice,” said UK President Eli Capilouto. “As the first university to sponsor such a flight, we’re honored to be able to provide this opportunity to many members of the UK family. Their service to the global cause of freedom is humbling, and the entire Big Blue Nation thanks them for their courage and patriotism.”

According to the university, many of the Veterans on the flight are affiliated with UK, including alumni, retirees and family members of faculty and staff.

Veterans and their guardians, along with president Capilouto, the director of UK’s Veterans Resource Center and Honor Flight Kentucky representatives will depart from Lexington early Saturday morning. Their tour of the D.C. area includes stops at the Marine Corps’ Iwo Jima memorial, the Air Force Memorial, the Women In Military Service for America Memorial and Arlington National Cemetery in Virginia, and the National World War II Memorial, Korean War Memorial, Vietnam Memorial on the National Mall.

The Veterans on this Honor Flight Kentucky mission served in World War II, Korea and Vietnam. Saturday evening, the flight will return to Lexington’s Blue Grass Airport, at where the community is invited to welcome Veterans home.