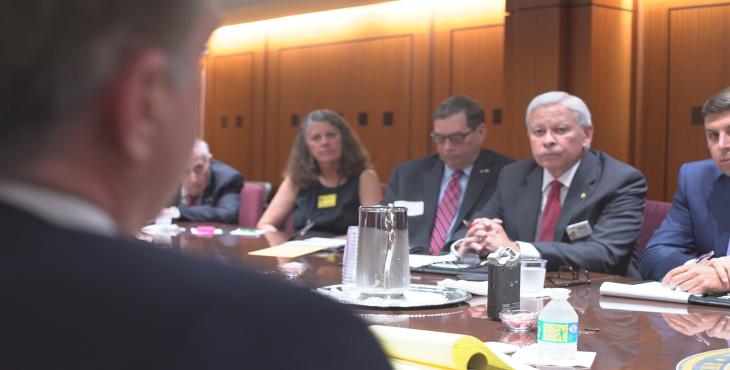 As part of VA secretary Dr. David Shukin’s continued commitment to transparency and accountability, he met with communicators from more than a dozen Veterans service organizations (VSOs) who attended a roundtable in Washington, D.C., Thursday, June 29.

“There is obviously a lot going on at the VA, and we wanted to have time for you to ask any questions and time for you to share any thoughts you have,” said Shulkin, who was joined by joined by Assistant Secretary for Public and Intergovernmental Affairs John Ullyot, VA’s chief communicator, and Acting Under Secretary for Health Dr. Poonam Alaigh. “Organizations that don’t listen to their customers and what they want usually become irrelevant and go out of business.”

Joe Plenzer of the American Legion and Joe Davis of the Veterans of Foreign Wars started a conversation centered on VA accountability and its culture, asking how newly signed legislation will help improve the quality of care Veterans receive through the system.

“It is an honor and a privilege to serve at the VA, and if you don’t feel that way and you don’t act that way, then I don’t want you at the VA,” Shulkin said. “We still have a culture that is not service-oriented, that is not striving for excellence and we are going to continue to get this right by getting the right people in the spots. The vast majority of our employees are people that I am proud to serve with who are working very hard every day, who we want at the VA.”

The secretary used the opportunity to discuss his five priorities for the department and highlight some of the progress made under his watch – while stressing to the VSOs his commitment to transparency, saying “We’re trying to be more transparent about what our problems are and how we’re going about trying to solve them.”

Casin Spero is a special assistant to the assistant secretary for the Office of Public and Intergovernmental Affairs.