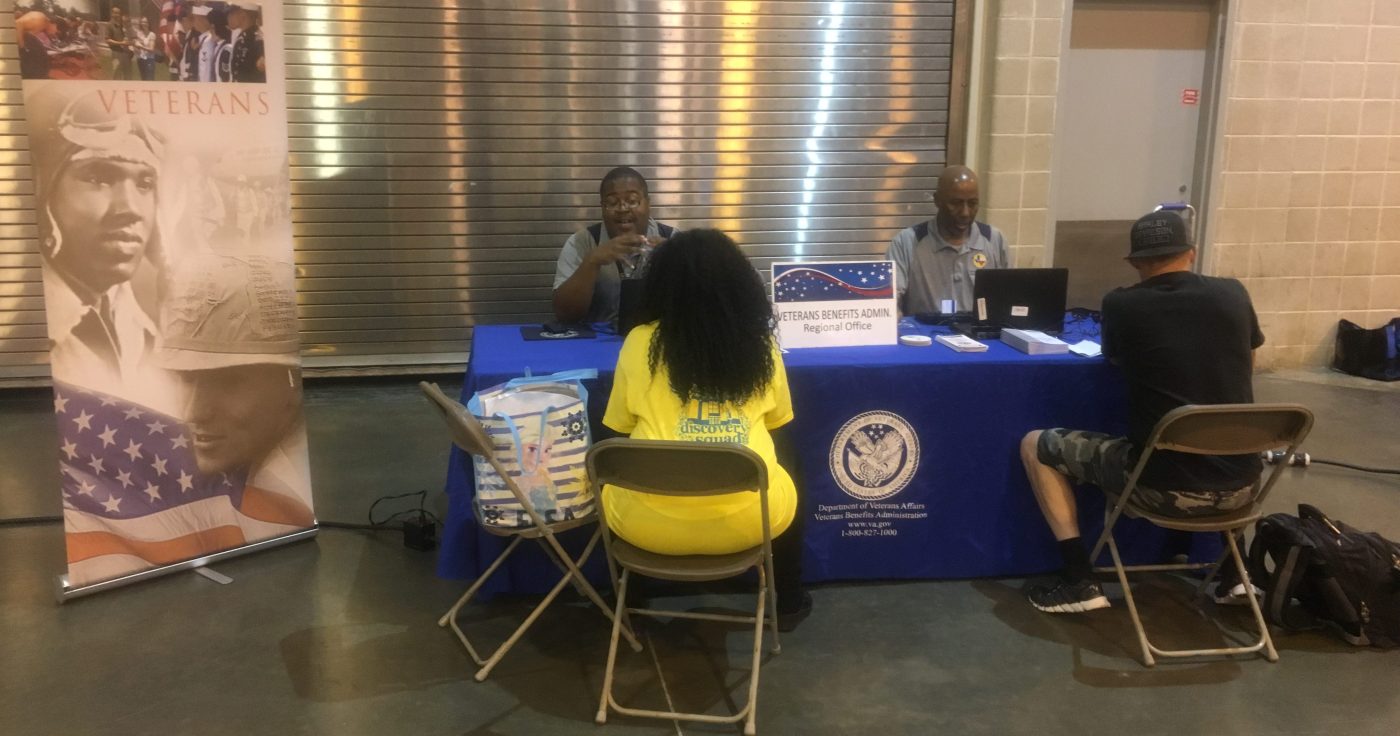 For the latest on VA’s response and inspiring stories of service to Veterans impacted by the hurricanes, read more on the blog.  For those impacted by Hurricane Harvey, click here. For information on Hurricane Irma, click here.

In the last fiscal year, more than $74 billion in benefits was delivered to almost 5 million beneficiaries. The Veterans Benefits Administration (VBA) team in Houston was determined not to let a hurricane and its aftermath get in the way of providing those benefits.

During and after Hurricane Harvey made landfall, VBA team members deployed to evacuation shelters in the city and elsewhere. Why? To help connect Veterans with VA benefits. One such Veteran was a 92-year-old who served during World War II who had never used VA before and never applied for a VA benefit. He was brought to the Houston shelter area because his daughter insisted he needed VA benefits assistance post Harvey.

“He told me about his service in Germany, his memories of World War II, as many Veterans do,” said Perry. “Then he went on to say that he can’t hear too well due to some ringing in his ears. He stated he worked around big heavy equipment in Germany.”

Perry knew that this  Veteran needed to apply for VA benefits.

“I was amazed that at 92, he had never thought of coming to VA for assistance,” said Perry. “We submitted a claim that same day and at the same time got him in sync with the Michael E. DeBakey VA Medical Center’s eligibility office for medical care as well.”

Perry conducts outreach at many events in the Houston area. “But outreach post Harvey was different,” he said. “We have Veterans coming up to us who have lost everything, by no fault of their own. It is my job to help them get back on their feet.”

Since Hurricane Harvey made landfall, two of the largest shelters that have been in place in Houston for evacuees were at NRG Center and George R. Brown Convention Center. Perry has rotated with another benefits counselor between both locations providing benefits assistance to Veterans in need.

“We have worked right beside our fellow VA HUD/VASH coordinators providing benefits assistance and also throughout the weekends to make sure their benefits are taken care of and also helping with military service verification,” Perry said. “Each day, we have had on average 8-10 Veteran encounters and up to four applications for VA benefits. When a Veteran is in need it pulls at your heart strings. Most of the Veterans we are seeing post Harvey have lost almost everything or have homes that are badly damaged and /or completely destroyed. If I can help them get back on their feet, nothing is more rewarding than that.”

Perry, a Veteran himself who started at the New York regional office in 2009, says he has been through a disaster like this – Hurricane Sandy in 2012.

In addition to the teams on site at shelters, all 660 of the Houston VA Regional Office staff  continued working remotely if they could. “It is important to point out that VA claims delivery continued at Houston VARO – it never stopped,” Perry explained.

About the author: This article was submitted to VAntage Point by the Veterans Benefits Administration’s Houston regional office.