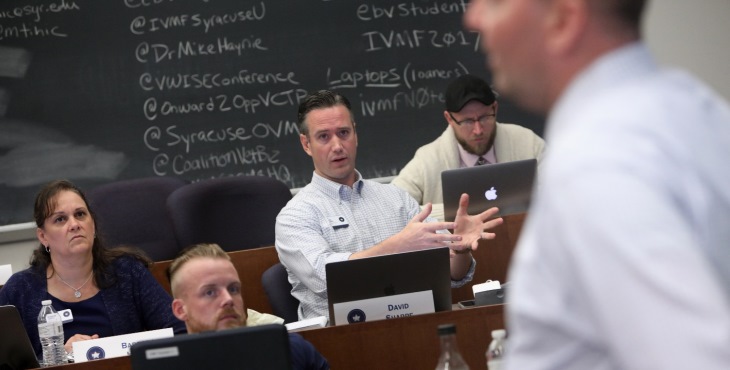 This week is National Veteran Small Business Week. In different circles you will hear the parallel drawn between small business success and the backbone of the United States economy.

According to the U.S. Small Business Administration (SBA) there are 28.8 million small businesses which account for 99.7 percent of all U.S. businesses. These small businesses employ more than 56 million people, about half of the U.S. workforce.  Another backbone of this country is Veterans and their families. There would be no “life, liberty or the pursuit of happiness” without them. We became the land of the free because of the brave.

Veterans have a long history of being entrepreneurs and building both literally and figuratively main streets across the nation with their businesses. After WWII, 45 percent of returning Veterans became entrepreneurs as part of their transition, and while that number has drastically declined today, they are still doing so today with10 percent or 2.5 million of U.S. small businesses are owned by Veterans

So what makes a great entrepreneur and why do so many Veterans identify with and succeed as small business owners? Here are a few reasons:

The list could go on as to why entrepreneurship seems to be a natural choice for Veterans. Starting this week and continuing throughout next 30 days the IVMF will be highlighting 30 Veteran entrepreneurs, strategic partners and staff members that have been a part of our journey over the last 11 years. You can learn more at ivmf.syracuse.edu/30in30. All of these individuals and businesses not only have the five characteristics listed above in common, but they also have taken their service to their country beyond retirement or separation by building better businesses, jobs and communities not only for Veterans but for the general public.

About the author: Misty Stutsman is the director of the entrepreneurship and small business portfolio at the Institute for Veterans and Military Families (IVMF) at Syracuse University. Within this role she is charged with building the Center of Excellence for Veteran Entrepreneurship as well as the Coalition for Veteran-owned business. In addition she oversees a broad portfolio of nearly a dozen programs and projects that advances and promotes Veteran entrepreneurship nationwide through research, resources, supply chain opportunities and tools as well as training and program development.