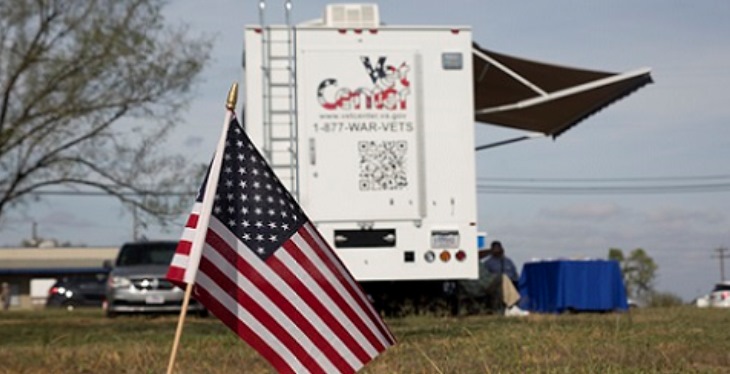 On Nov. 5, an individual went into a church service and killed 26 South Texas residents in the rural town of Sutherland Springs, Texas, about an hour’s drive from the South Texas VA.

Less than eight hours after the shooting ended, an initial multidisciplinary team led by South Texas VA chief of staff Dr. Julianne Flynn and made up of chief of chaplains Juliana Lesher, social worker Ute Hall and nurse Rose West were on the road.

Their expediency paid off, because as the team arrived, the FBI was making the painful notifications of family member status. The team got to work immediately.

This was not Flynn’s first major tragedy. In addition to her VA job as the South Texas VA chief of staff, she is a colonel in the Air Force Reserves. She was stationed at Andrews Air Force Base during the 9/11 attack on the Pentagon.

She said everyone came together to provide care for the military members and their families, as well as everyone involved in the community, just like what was unfolding in Sutherland Springs.

Lesher was already at the Audie L. Murphy Memorial Veterans Hospital chapel praying for the people of Sutherland Springs when the call to assist came in. “Moments after prayerfully singing those words, [Out in the highways and byways of life, many are weary and sad, make me a blessing to someone today], I was informed that Dr. Flynn was going to Sutherland Springs, and I knew that I was to go with her,” Lesher explained.

Lesher herself has a deep background working with traumatized families. She was the trauma chaplain for a level one trauma center in Los Angeles County, often providing spiritual care and counseling for family members of victims of gang violence. When she introduced herself as a chaplain, Lesher said several Sutherland Springs families shared with her of how their Christian faith gives them strength in times of crisis. She spent time through the evening and into the early morning hours with several families.

Providing counseling in such an intense setting can be taxing, and South Texas VA chaplain Dave Zavala went to Sutherland Springs the following day with several other members. Zavala said the families trembled as they recounted their horrific stories. He responded with condolences and hugs and felt it was important just being a listener and was fulfilled by the opportunity. “The efforts of the VA team to offer support to this community in mourning was certainly worthwhile,” Zavala said.

Ute Hall, a licensed clinical social worker, was the social worker on duty in the emergency department when the tragedy unfolded. She immediately wondered if the shooter was a Veteran, and became angry when she realized that he was. But she jumped at the opportunity to assist. “I was grateful for the opportunity to channel my anger and sorrow into a meaningful endeavor,” Hall said.

Hall also brought a world of experience to the small rural town of less than 400 people. She worked in a level one trauma center, providing support counseling to patients and their families.

On Sunday evening, she shadowed the assigned pastor [each family was assigned a pastor from the local area], and stood by with the families who were anxiously awaiting word from authorities as to the status of their loved ones.

Having a background in trauma, Hall said it is normally accompanied by chaos; screaming, crying and anger, but Sutherland Springs was different and it took her off guard. “The calmness of the people as they patiently waited was disconcerting,” Hall said. “I was not quite sure what to do with that initially,” she added.

The team stayed until the early hours Monday morning, and driving back to San Antonio in the dark brought on a sort of emotional numbness as Hall described it. A feeling she said she was still dealing with a couple days later.

West was proud and excited to represent nursing and felt that not only did they provide immediate support to affected families, but it supports the VA mission and presents a different perspective of the VA.

That curiosity about the VA in the community continued throughout the week as onlookers and media outlets streamed into the area. The VA Vet Centers in San Antonio dispatched their mobile van to the area Monday morning, securing a spot in an open field just a couple hundred feet from the First Baptist Church.

They were so close, ATF agents came through that field with metal detectors looking for any shell casings, said Ray Kaloplastos, a Veterans outreach program specialist at the San Antonio Vet Center, one of several counselors deployed throughout the week.

Although there were victims that were Veterans, the VA staff on hand were authorized to help anyone who needed it. That message was repeated many times those first few days. Visitors were drawn to the large van, emblazoned in patriotic red, white and blue.

Some came to simply thank the VA for supporting the people of Sutherland Springs, like McCall Teicher who approached the team with a homemade t-shirt with the words, “Free Hugs” written on it and her dog Merlot in tow. She was everything as-advertised, hugging the entire Vet Center staff.

Drawn by the huge American flag and Vet Center logo, Marine Veteran, Miguel Estrada was also surprised to see VA on site. He was there looking to donate blood, but was disappointed to see there wasn’t a donor drive. He came up with the idea to purchase a couple of cases of water for them. “I wanted to bring my wife and daughter up here to donate blood, but when I saw them [mobile van], I wanted to bring some water,” Estrada said. “I just felt so helpless sitting there doing nothing,” he added, becoming emotional. The staff assured him his support was appreciated.

Later in the week, after family notifications were made, a local chaplain drove up to the mobile van looking for someone from VA. A staff member was escorted to a location set aside for victim’s families because they had questions about Veteran benefits. They were linked up with Veterans Benefits Administration supervisor Mike Walljasper, who was able to provide immediate assistance over the phone.

The Veteran’s family was relieved to get help so quickly and was also given assistance with the Department of Defense Casualty Assistance Office and Defense Finance and Accounting Service.

Just like the verse Chaplain Lesher sang, ”there were many weary and sad,” but hopefully, VA was a blessing to someone on that day.

About the author: Steven Goetsch is a public affairs specialist for the South Texas VA in San Antonio, Texas.