Home / Honoring Vets, Veteran of the Day / Look back at this year’s most popular #VeteranOfTheDay posts

Look back at this year’s most popular #VeteranOfTheDay posts 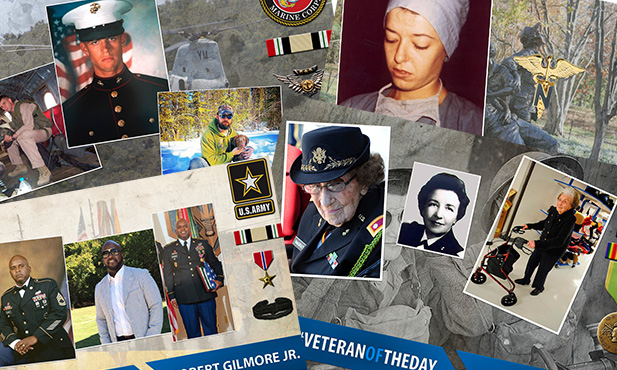 As 2017 comes to a close, here’s a look back at VA’s top 10 #VeteranOfTheDay posts. You can nominate a Veteran for VA’s Veteran of the Day — click here for details.

To see the complete top 10 posts as they appeared on Facebook, click on the headline or the photo below.

Adam was drafted into the Army and served as an announcer for American Forces Network. He went on to play his iconic role as Batman in the 1960s, both on television and on film. Adam also voiced animated characters on numerous shows, including his long-running character Mayor Adam West on Family Guy. He passed away on June 9, 2017, at age 88. We honor his service.

Robert joined the Air Force to become a fighter pilot. He flew F-84 and F-100 jets for three and a half years in the strategic and tactical air commands, and was a member of the squadron’s precision firepower demonstration team. After serving in the Air Force, Robert earned a MBA from Harvard and became a successful business executive. He served in volunteer church positions, and for the past 42 years had been a senior leader of The Church of Jesus Christ of Latter-day Saints. On Oct. 1, 2017, he passed away. We honor his service.

Charlie served six years in the Navy as a boiler technician. “I became a man in the Navy,” he said in a PR.com release. “That’s where I got my first apartment, my first marriage, my first bank account, my first car. That was a good experience.” After a battle with leukemia, Charlie passed away in April. We honor his service. 451,293 views

Don enlisted and served for two years during World War II on the motor torpedo boat tender USS Cyrene as a seaman first class. After the war, he became one of comedy’s most famous funnymen. Don got his big break when his insult comedy began getting him some attention from the “Chairman of the Board,” Frank Sinatra. He passed away April 6, 2017. We honor his service.

Betty served in the Marine Corps from 1978 to 1992. She enlisted as an admin clerk and went on to serve on recruiting duty and as a MEPS liaison. She was stationed at Kaneohe Bay, Hawaii; Marine Corps Recruit Depot San Diego, and Baltimore. After she discharged she navigated her way through several positions in VA. In 2004, Betty assumed the position of associate director of the Center for Women Veterans and is currently still serving in that role. 226,477 views

Jose enlisted in 1968 and was sent to Vietnam. His unit came under heavy attack by North Vietnamese Army soldiers concealed in well-camouflaged emplacements. Jose reacted by seizing the initiative and plunging forward toward the enemy positions. He personally destroyed several enemy personnel and silenced an antiaircraft weapon. Jose was killed in action on Aug. 28, 1969, but came home to Arizona in January of this year. For paying the ultimate sacrifice, he was posthumously awarded the Medal of Honor.

Violet served during World War II and enlisted when the first officer candidate class for women accepted her application. At the end of the training period, she had earned the rank of second commanding officer and was assigned to Fort Huachuca, Arizona, where the first detachment of African-American women for the WAC were stationed. After Fort Huachuca, Violet and her unit became the only all African-American female unit to serve overseas in England and France. In October, Violet celebrated her 101st birthday. Thank you for your service, Violet!

George served during World War II and was one of the original Tuskegee Airmen. After graduating from high school, he enlisted in the US Army Air Corps in 1942. George was sent to Tuskegee to help form the 332nd Fighter Group and the 96th Air Service Group, where he served as a supply sergeant and support personnel. In 1944, George was deployed to Italy as part of the 332nd Fighter Group, assigned to the 366th Air Service Squadron. During his 26 years of service, he was assigned to stations in Germany, England, Turkey and Iran, before eventually retiring from McGuire Air Force Base where he worked as an aircraft and missile electrician. In 2007, George and the other Tuskegee Airmen were awarded the Congressional Gold Medal. He passed away June 19, 2017.

Stacey served from 1998 to 2000 as a traffic management operator. While serving her first overseas assignment in Japan, she was sexually assaulted by a senior NCO. When she reported the incident, she was separated with an “Other Than Honorable” discharge. In January 2016, after years of litigation, Stacey received a discharge upgrade from the Department of Defense, which acknowledged her honorable military service. Currently, she is involved with creative endeavors that allow her to share her experience with others.

Mike served in Operation Iraqi Freedom as a K-9 handler with the Security Battalion from 2001 to 2005. He then joined the reserves in 2008 and served with the Wounded Warrior Battalion until 2010. Mike trained and managed the first Marine Corps team of working dogs specially trained for bomb detection. He is committed to serving his fellow Veterans. Working at the Balboa Naval Medical Center with the Wounded Warrior Battalion, he developed a series of initiatives with other organizations aimed at helping wounded soldiers.