Veteran entrepreneur discusses how military service has influenced his career 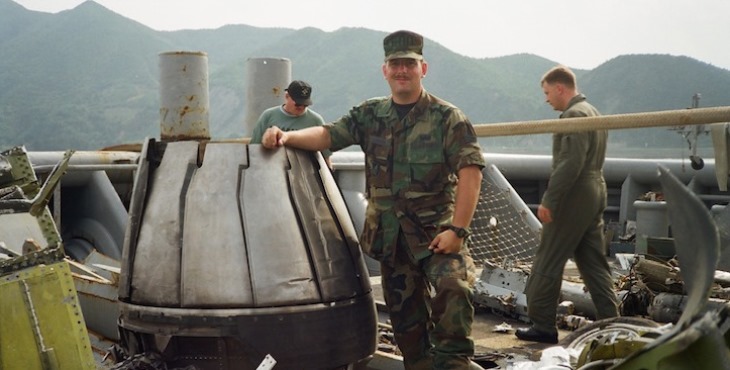 How often do you get to meet people who’ve been a dairy farmer, car salesman, entrepreneur, photographer, polyglot and a Veteran, all in the same lifespan? I’m sure that doesn’t happen often. I’ve been lucky to not just know such a person, but to also get a chance to work with him.

Meet Michael Cannon, who served as explosive ordnance disposal journeyman from 1994 to 1999. Today, he is an entrepreneur, leading the revenue team at Axelerant, a software services provider. For me, he’s a customer, and I would just say I’m more than lucky to have customers like him.

In November 2016, I was on my first trip to Boston when I got a chance to get to know Michael outside of work. When we met, he asked me some deep questions – the ones a customer or even a friend might never ask. It made me realize that Michael’s way of living life is completely different from that of others I have met. He’s not just another business guy trying to make profits for his company. He is more about the purpose of life, finding meaning at work, about empowering people and showing them the way, by leading from the front or sweeping up the rear.

It was then that I thought that maybe his military experience has made him the way he is. As an entrepreneur who is always looking for meaning and purpose, I have always been a fan of people who are all about purpose. So when I got a chance to ask Michael some questions about how his past experiences affect his current life, I pounced on the opportunity.

Initially I was hoping that I’d weave a story around his answers, yet I felt it made more sense if I were to present in the interview format itself. This way you will get to see Michael, just the way he is, and be inspired to go and help others.

How long have you served? Experience. I served a normal four-year term plus a few months extra to acquire an overseas duty station, Osan Air Base in South Korea.

What made you enter the forces? A retired Air Force buddy of mine thought my being a car salesman was a waste of my talents and booked the recruiter appointment. From there, I had top scores and choice of the most interesting opportunities. I went for something difficult as it was better than being bored and letting life pass me by.

What did you enjoy the most? I loved the team camaraderie the most of the EOD community. That’s what I continue to miss to this day. Jokingly, we trained well, worked hard and played harder. Most days our lives weren’t on the line, but when it was, we were serious until things were cool and we could let the adrenaline down.

How was it like coming back to the regular / corporate life? In the military I learned to have a purpose to most everything that I do and if I’m going to do something, to do it well. In returning to civilian life, I’d gone from working daily with highly motivated people to clock watchers.

Was it difficult to adjust? Yes, coming back to the “real world” was a frustrating experience. Decisions are slow to be made, and without thought to the long-term consequences. I learned the hard way that people will do much to avoid responsibility of any action.

How did you overcome it? I give an opportunity for others to lead. If nobody stands up and if the task is important to me, then I’ll sacrifice myself to the leadership role. I do mean sacrifice, being a leader in most civilian organizations isn’t a place where you make friends. Even when most everyone is on board with a clear vision.

How did your experience as a Veteran help you?  I value the potential of the people around me. Before, I saw people as folks to fit or not and to be used as such. Now, through seeing potential of people and giving them the opportunity to reach it, they’re often helping others in the same vein. I find this helping others reach their potential as a really cool interactive version of pay it forward

Were you able to maintain the same discipline? I continue to hold this same concern for people’s potential. However, I do recognize that not everyone wants to be helped or has personal drive. As such, for them, I follow a  three strikes or attempts and then onward elsewhere principal.

How about your colleagues? Were they able to match your discipline? If not, did you feel frustrated about this at any point in time? In my higher level relationships, I’m often with like minded people. I don’t expect everyone to hold my same point of view or even like it. If they did, I think life would be more less exciting. I feel that controversy, heartfelt drive and story sharing are required for good conversations and solid relationships. Those are the things I try to nurture, not my specific worldview.

What would you like the government to do more for Veterans? And what would you like civilians to do? I would like to see national service become a requirement of all capable citizens. For those not capable, then life skills or vocational training. Further, I would like to see that post traumatic stress disorder is given more legitimate recognition. Not everyone deals with it the same way or gets fair treatment. In moving back to the United States and finally publicly showing I’m a military Veteran, I’m getting personal thank yous and even store discounts. It’s a nice gesture. However, I’m wondering if those efforts could be better used to help those who need recognition for their contributions to the US; immigrants, homeless, wealth divides, etc.

Anything else you would like to share? Thank you for letting me fondly reflect upon twenty-plus year memories.

Abhinav Sahai’s life aim is to empower people. As an entrepreneur, he’s creating DIY tools for digital marketing – to enable more entrepreneurs take control of their marketing. He spends most of his time either learning, from people like Michael, or sharing his knowledge with people – like this story.