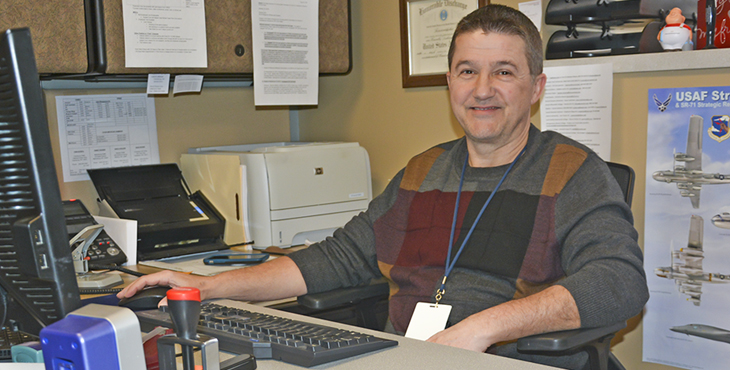 VA’s Vocational Rehabilitation and Employment (VR&E) Service would like to recognize one of our own, Thomas J. Russell.

Russell is a Veteran and a vocational rehabilitation counselor and has overcome several barriers to achieve success in his life. Here is his story:

I am a Veteran of the U.S. Air Force and served from November 1985 to September of 1988. I became deathly ill with pancreatitis caused by excessive alcohol consumption in early 1988 while on active duty stationed at Hanscom Field in Massachusetts. Upon hospitalization, an emergency pancreatic debridement surgery left me insulin dependent and I was soon thereafter honorably discharged for medical reasons. With my disabled Veteran hiring preference, I obtained a job with the U.S. Postal Service, where I worked from 1990 to 2004. Unfortunately, my drinking did not cease with the onset of my disability. In fact, it escalated over the course of the next 18 years and eventually cost me my job with the Postal Service. Shortly after losing my job, my wife committed suicide and I was left to raise our 13-year-old son alone. I was unemployed, unemployable and hopelessly addicted to alcohol.

My then son, Parker, confronted me a few months after his mother’s passing and said, “I just buried my mother and now you’re going to force me to watch you slowly kill yourself?” I told him that I deserved exactly that and he said the kindest thing anybody ever said to me, “I think you deserve better.”

On Oct. 8, 2006, I attended a 12-step meeting for alcoholism and I have been sober since. I have been through residential treatment programs at the VA several times, but did not seek detox or inpatient treatment this time. The times I had sought treatment previously were always at the encouragement (forceful or otherwise) of somebody else whether it was my family, employer, or the state of Massachusetts. This time, with the encouragement of my son, I sought sobriety because I felt his plea was desperate and sincere and I, for once, believed I deserved something better for him and myself.

In the fall of 2006, I enrolled at a community college using a Pell grant. Another Veteran asked me why I wasn’t using VR&E. I didn’t even know what VR&E was, but I applied, was found entitled and this program supported my educational and employment goals for the next five and one half years. I did very well in my studies.

I utilized VR&E services out of the Boston office and my counselor was Bob Carter, whom I found to be very authentic. I also utilized state Vocational Rehabilitation services, which assisted me with provision of gas money for my commute to and from school. I had a great support system including my son, mother, siblings, VR&E, and the state rehabilitation service commonly referred to as Mass Rehab. Through the process, I gained a measure of confidence that I had lacked most of my life. I also learned that I have an underlying anxiety disorder, which in hindsight helps me understand why I self-medicated for all the years prior.

My counselor taught me the importance of networking and establishing relationships with the instructors in college. I established a relationship with an adjunct instructor in an Addictions independent study. This instructor knew my background, which was similar to his. He, too, was an Air Force Veteran, who had been sober for many years.  He offered me a job as a clinician at a treatment center near where I lived. I told him that my ultimate goal was to work for the VA and he understood this and hired me anyway.

A year after I assumed full-time employment with the treatment center, I was offered my current position [as a Vocational Rehabilitation Counselor.] I relocated to West Virginia in 2014, to assume my job as on out-based counselor at the Clarksburg VA Medical Center. I am now happily remarried and own a home near where I work.

I now get to help Veterans through the same program that was critical in my life’s transformation. I am grateful that VR&E was there for me along with all the other supports, which were essential to my success. For years, I thought that my lot in life was extremely limited but VR&E has taught me that my boundaries were self-inflicted and imaginary. I consider myself a VR&E success story both as a participant and now, as a counselor. I use the same authenticity with my Veterans that my counselor used with me. It gives me instant credibility with those I serve and this, to me, is instrumental to my relationships with them.

If you are interested in seeing how VR&E may assist you in your employment goals, please visit the VR&E website.