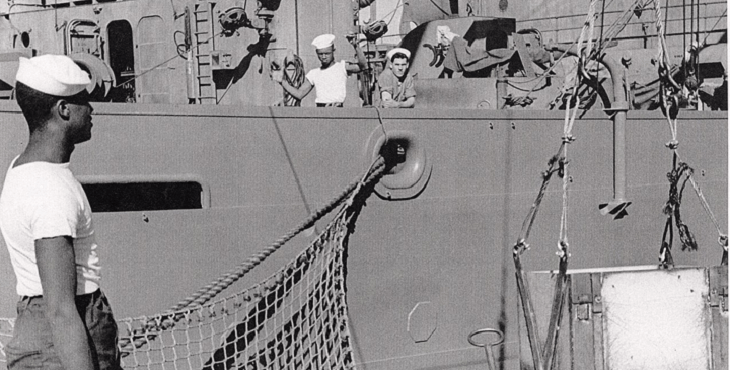 Enlistment photograph of A. D. Hamilton

A. D. Hamilton grew up in Mississippi and faced many hardships at a young age.  His grandfather raised him after his mother died when he was a child.  He attended a segregated school for African-Americans and only completed the sixth grade.  As a teenager, he watched the United States enter World War II.

Hamilton entered the Navy in May 1943.  His enlistment record states that he was 18 years old at the time of enlistment, but all Census records that he appears in indicate that he may have been younger.

In April 1944, Hamilton reported to Port Chicago near San Francisco, California.  The port was a major depot where munitions were loaded onto ships headed for the Pacific Theater.  African-American sailors performed most of the labor at the port. Racial segregation existed in the military during the war, and the Navy assigned the majority of African-American sailors to non-combat related positions.

The sailors at Port Chicago worked in shifts around the clock.  Their labor was both continuous and demanding.  Standards for handling dangerous munitions degraded over time, as sailors received insufficient training.  Officers created competition between shifts using incentives to get higher labor outputs.  All of these practices created a recipe for disaster.

The damaged remains of a dock at Port Chicago following the massive explosion. The remnants of the SS Quinault Victory appear in the background.

On the morning of July 17, 1944, a massive explosion occurred at Port Chicago.  The 10,000-ton blast vaporized one ship, threw another ship upside down, and shook homes miles away.  It was the worst home front disaster during World War II.  After months of recovery efforts, the Navy determined that 320 sailors died in the explosion, most of whom were African-American.  A. D. Hamilton was among them.

Daniel Jocz, a high school teacher from Los Angeles, California, recently discovered Hamilton’s story while participating in the Understanding Sacrifice program.  Since 2014, Understanding Sacrifice has selected 54 teachers to research fallen heroes and bring new lessons on World War II into classrooms.  Last year, they conducted research on 18 service members buried at Golden Gate and San Francisco National Cemeteries, and National Memorial Cemetery of the Pacific.  Their stories and the lesson plans based upon their service are now accessible to the public and other educators.

Understanding Sacrifice is an educational program by the American Battle Monuments Commission and National Cemetery Administration in partnership with National History Day and the Roy Rosenzweig Center for History and New Media at George Mason University.  To learn more about the Understanding Sacrifice program visit https://abmceducation.org/

To learn more about the Veterans Legacy Program and their other partnerships please visit https://www.cem.va.gov/legacy/

Please join us in recognizing the service and sacrifice of A. D. Hamilton. Read his biography, hear his eulogy, and view the lesson plans developed around his legacy here: https://abmceducation.org/understandingsacrifice/soldier/a-d-hamilton