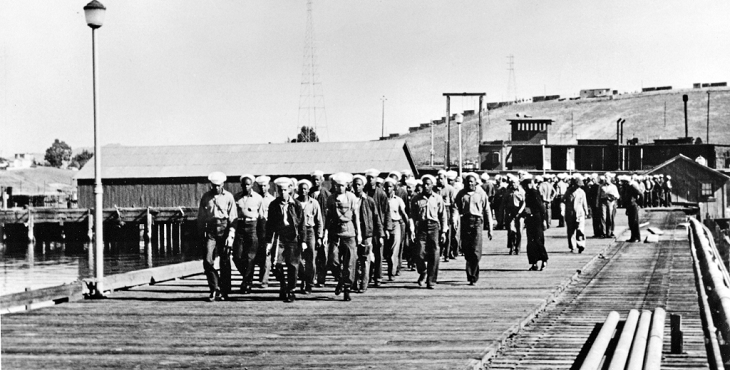 A. D. Hamilton, Lawrence Matthews, James Bridges, and Leroy Hughes are the names of just four of the 320 sailors that died in the Port Chicago disaster. On July 17, 1944, a massive explosion occurred at the ammunition depot of Port Chicago. It was the worst home front disaster in World War II.  Over 10,000 tons of explosives detonated, sinking two ships and killing over 300 sailors, most of whom were African-American.

Damage at Port Chicago following the massive blast that killed 320 sailors. The remnants of the SS Quinault Victory appear in the background.

The disaster sparked controversy.  Inadequate training, hazardous conditions and irresponsible labor practices all contributed to the disaster.  Following the disaster, many of the surviving sailors felt that their commanders had not properly addressed these issues when they asked them to continue to work.  In response, the sailors protested with a work stoppage.

Although no violence or threat of violence occurred, the Navy viewed the work stoppage as a mutiny.  In September 1944, the Navy charged 50 of the Port Chicago sailors with disobeying orders and initiating a mutiny.  A court martial found them guilty in October.

The disaster at Port Chicago and its aftermath are important moments in African-American history.  The events caught the attention of civil rights activist and chief counsel of the NAACP, Thurgood Marshall.  He believed that the court martial unjustly charged the sailors with mutiny.  Furthermore, he called for a government investigation of the Navy’s practice of assigning African-American service members to segregated support roles, as well as the unsafe conditions that the sailors worked in.  Bringing national attention to these issues contributed to the executive order that desegregated the military in 1948.  The legacies of the Port Chicago sailors still resonate today.

The 50 sailors from Port Chicago charged with mutiny appear at their court martial in 1944.

Many of the sailors that died in the Port Chicago disaster are now buried at Golden Gate National Cemetery.  Last year, the Veterans Legacy Program partnered with San Francisco State University to conduct research on Veterans buried at local national cemeteries.  The students and faculty created a series of short films about the stories that they discovered at Golden Gate and San Francisco National Cemeteries.  One of the films highlights the Port Chicago disaster and shares the legacies that came from it.

This partnership is one of the ongoing efforts to modernize the way that we memorialize Veterans.  In May 2016, the NCA launched the Veterans Legacy Program in order to engage students, teachers, and the public with stories about the lives and service of Veterans.  To find out more about the Veterans Legacy Program, please visit the website located here: https://www.cem.va.gov/legacy/

NCA is proud to support local filmmakers, storytellers, and students engaging with the stories of Veterans in their local national cemeteries. They may raise issues of local interest or even controversy. We hope this encourages all viewers to learn more about the Veterans and their circumstances. The views expressed by parties in the films are not those of NCA, but presented as part of the plurality of perspectives and views surrounding the life and service of American Veterans.

If you would like to learn more about the Port Chicago disaster and its aftermath, please read the Naval History and Heritage Command’s publication found here: https://www.history.navy.mil/research/library/online-reading-room/title-list-alphabetically/p/port-chicago-ca-explosion.html

In recognition of Black History Month, NCA is proud to share the film “Remembering Port Chicago.”