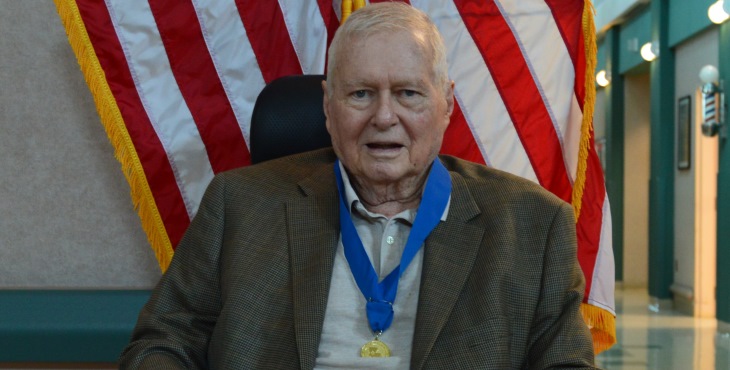 Veterans have some of the most interesting stories, yet they are some of the most humble people that you will ever meet. One such Veteran, who currently resides at the Southwest Louisiana Veterans Home, is Dr. Robert E. Brierty, former major in the United States Army.

“Dr. Bob,” as he is known to friends, has a medical degree in pathology from Creighton University, a Jesuit Roman Catholic university in Omaha, Nebraska.

He joined the United States Army because “it was a family thing.” A close cousin was attending West Point at the time and the thought of serving appealed to him.

As a pathologist, he diagnosed diseases by using organs, tissue and body fluids. As an officer on the U.S. Army health care team, he built a distinguished medical career while making a difference in the lives of the soldiers and their families.

While deployed to Vietnam, he was the only pathologist in the country for an entire year during a cholera epidemic. Cholera is an infectious and often fatal bacterial disease of the small intestine, typically contracted from infected water supplies and causing severe vomiting and diarrhea.

Dr. Bob also spent a lot of time in Saignon, a peaceful little village perched at the top of a hill in the southeastern France diagnosing the cause of death of our service members.

“I really enjoyed being able to make a diagnosis in questionable cases and impacting patient care through biopsy techniques,” he says of his time in the Army.

He offers the following advice to the next generation of pathologists: “Stay up to date with the latest technology.”

Recent studies on the future of pathology found that, “you can do a lot more with digital pathology than you can with manual microscopy: instant sharing of results with multiple departments and colleagues; being able to include digital images with your pathology report; using computerized quantitative analysis for prognostic scores; removing the danger of breaking glass slides in transit; remotely interpreting frozen sections and so on. These advantages can all help speed up diagnostic accuracy or turnaround times.”

He feels that serving in the Army helped him a lot in life and in his career saying, “the Army offers widespread opportunities in all fields with a secure and rewarding career.”

Dr. Bob met his wife on a tennis court in Lake Charles. They had 13 children who now live all across the world. He retired from private practice in 2012, and now he and his wife reside at the Southwest Louisiana Veterans Home located in Jennings, Louisiana.

“We are very happy here. They could not give us anything more than just allowing us to be together during out golden years.”